With all of the approved and now proposed projects for multifamily housing coming down the pike in Davis, it is helpful to be able to have a clear picture of what is being proposed and where.

The City of Davis and Ashley Feeney, Assistant Director of Community Development & Sustainability for the City of Davis, have generously put this chart together for the Vanguard.

We were able to get clarification on Plaza 25555 – a project that is currently in planning review and therefore any assessment is preliminary.  Currently the plan is to get the General Plan Amendment and zoning change first, before general approval of the project.

At this time the project is anticipating 200 units.  Those units break down as follows: 30 micro units, 17 one-bedrooms, 14 two-bedrooms, 9 three-bedrooms, 96 four-bedrooms and 34 five-bedrooms.

That means, of the 200 units, 120 (60 percent) are anticipated to be four- and five-bedroom units.  That comes to roughly 554 student-oriented beds.

Ashley Feeney told the Vanguard, “Plaza 2555 is going to be rented by the unit instead of by the bed. They could rent to anyone. The four and five bedroom units are anticipated to be more student oriented by their nature though families could rent them.” 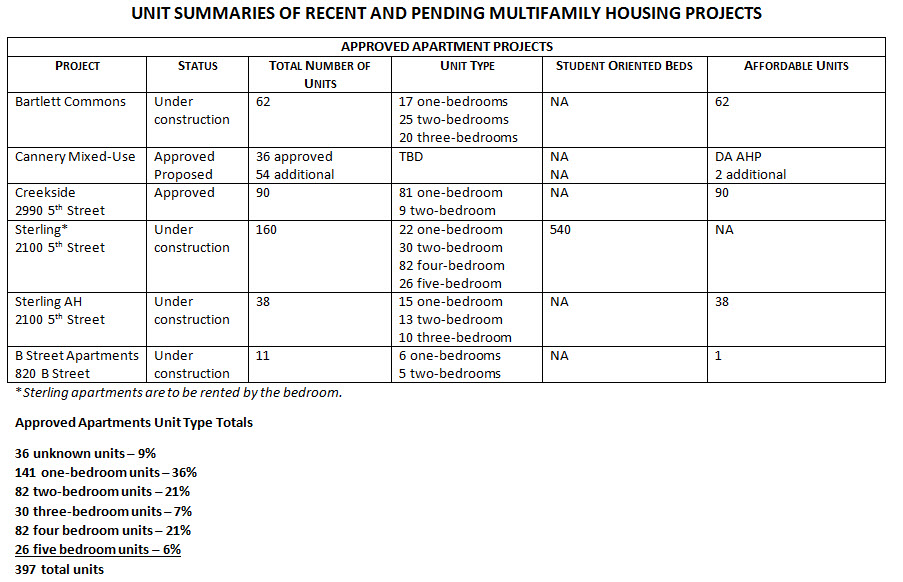 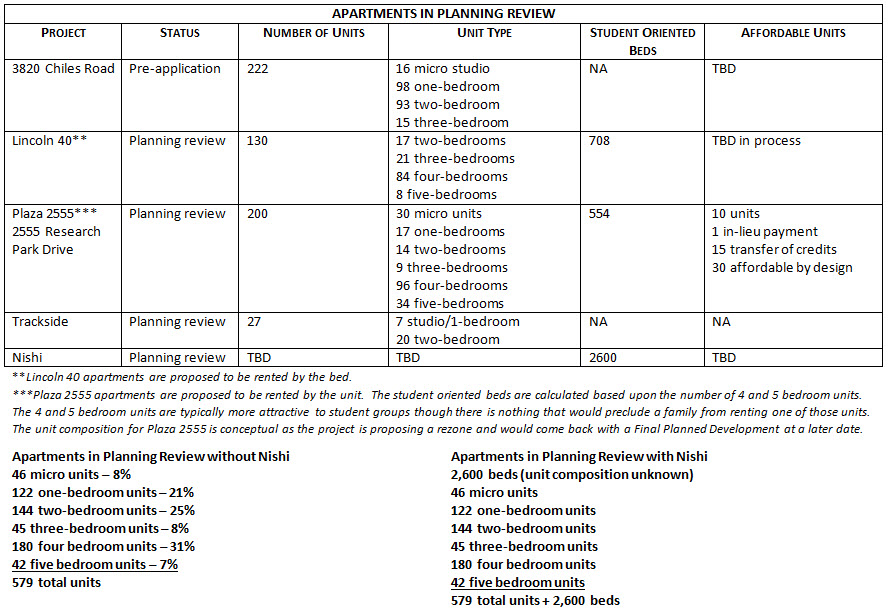 Even then, 38 percent of the units that are pending (not counting Nishi) are four- and five-bedroom.

The unknown at this point is what the mix would be at Nishi.  We know that the housing there is expected to have 2600 beds.  What we do not know is what the unit composition will be.

There is some anticipation that there will be a student-oriented project at 525 Oxford Circle.  However, according to Eric Lee, a planner with the city, “While we have met several times with owner reps about a project on this site, no formal planning application has been submitted. I do not have any specific information or plans that I can share. We expect an application at some point but the owners are still going through different concepts. Right now we are focused on trying to get the building demolished because of homeless and safety issues with the site.”

At this point there is no project, therefore, for either Oxford Circle or University Research Park.

Right now there have been 540 beds approved at Sterling.

Lincoln40 is current planning for 708 student beds.  Plaza 2555, once again, does not have a fully defined project but anticipates 554 beds (but again, it is renting by the unit, not the room).  And Nishi currently, without a firm project proposal, is projecting 2600 beds.

If everything were approved, that would be 1792 beds for the three larger apartment complexes excluding Nishi, which will also require a Measure R vote.  And 4392 if Nishi got voter approval at 2600 units.

As we have noted previously, the university has committed to 6200 beds which would get the campus to 40 percent on-campus housing.

The city and others have pushed for 50 percent, which we project to mean the need for an additional 3800 beds or 10,000 total new beds.

7 thoughts on “Approved and Planned Apartment Unit Breakdown for Davis”