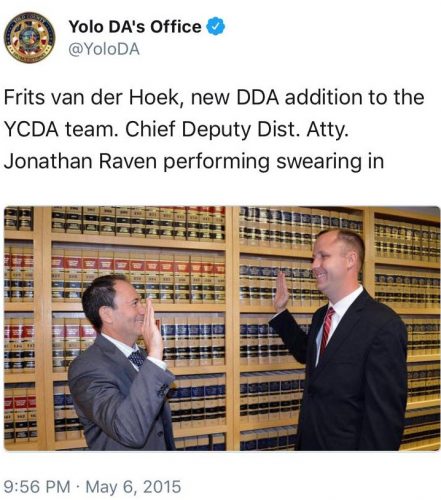 It is difficult to know what happened back in 2014 when at San Jose State University two police officers, including now-Yolo County Deputy DA Frits van der Hoek, were involved in a fatal shooting.  The police claim that they had no choice and that they were firing on the man as he advanced on them.  We have not been allowed to see the video and the stills show that the man may have been retreating.

Two people who did see the video claim to have seen no aggressive move by the man.  The DA’s office in Santa Clara County cleared the officers of criminal wrongdoing but that’s hardly reassuring.  We saw a pretty questionable encounter in Staten Island result in no criminal charges either.

What we do know is that, given the concerns about the relationship between DAs and police, it is absolutely inappropriate for the Yolo County DA’s Office to hire Mr. van der Hoek, given the circumstances of that shooting.

Under Yolo County DA Jeff Reisig, there has been only one instance in which an on-duty police officer faced charges for his conduct and, in that case, he was not acting under the color of any sort of authority.  That was West Sacramento Police Officer Sergio Alvarez, who was eventually convicted of multiple counts of rape that were committed against women while on duty.  In that case, there was no gray line between official conduct and illegal misconduct.

However, in every case where excessive force occurred, the DA’s office has failed to prosecute.  That includes the 2009 fatal shooting of Luis Gutierrez by sheriff’s deputies in Woodland.  That

includes the 2011 Pepper Spray incident where the DA’s office found no probable cause that a crime was committed, even though multiple reports faulted Lt. John Pike, claiming he used unauthorized and excessive force against unarmed and seated protesters.

There was the 2012 Tasering of Tatiana Bush and Jerome Wren by Officer Nicholas Benson that remains troubling.  The DA, of course, neglected to charge the officer with a crime, but did charge Ms. Bush and Mr. Wren with resisting arrest before finally dropping the charges.

The Davis PD would fire Officer Benson, but he managed to get a job with the Galt Police Department, despite an apparent strong warning from Davis PD that Mr. Benson had engaged in multiple use-of-force complaints.  The failure of the DA’s office to step in allowed Mr. Benson to get a job elsewhere, where he of course used excessive force again and a lawsuit remains pending in that case.

In 2005, several West Sacramento police savagely beat brothers Ernesto and Fermin Galvan, claiming the brothers were resisting arrest and that necessary force was used.  The DA charged the brothers with resisting and obstructing officers, with no underlying charge, and the case wound through three mistrials, with the DA finally dropping the case.  The DA never filed charges against any of the officers, despite evidence that excessive force had been used, and it took the brothers filing a federal civil case to finally achieve some compensation for their severe injuries.

On Tuesday, numerous activists complained about the lack of discipline against the officers involved in the Picnic Day incident.

But the message sent by the DA’s office in hiring Mr. van der Hoek when they knew he had faced criticism and an investigation into his actions is hard to swallow.

One of the biggest complaints since the nation began focusing on officer-involved shootings has been the lack of ability of the legal system to deal with these cases appropriately.  A large number of them – in fact the vast majority of such cases – have resulted in zero prosecutions.  Where prosecutions have occurred, even in cases that are fairly clear, there are rarely if ever successful convictions.

Caren Morrison, writing in December of 2015 in the wake of the charges against officers who shot Laquan McDonald in Chicago, is a former federal prosecutor.  She has studied how prosecutors handle police violence cases.  She asked: “How do they deal with the conflict of interest raised by investigating the police departments they work with? Who determines whether a civilian death is justified, as the vast majority are found to be?”

She said, “The results are not pretty.”

For her, “The real issue is that the prosecutor controls whether a case goes forward at all. This is true whether the case proceeds by indictment or preliminary hearing. Other than public opinion and the possible pressures of reelection, no one oversees the prosecutors.”

Critics have pointed to the close and necessary relationship between the police and prosecutors.  Prosecutors have to rely on police to properly arrest, collect evidence and of course testify in court in order to win prosecutions and, by going after police officers, the theory goes that prosecutors risk that relationship.

In a sweeping story at the end of 2015, The Guardian published an exposé which found that in the year 2015, DAs cleared police of wrongdoing in 217 cases of police killings.  “The total represented 85% of all killings by police that were ruled justified in 2015,” according to a Guardian analysis.  That included the case of 12-year-old Tamir Rice killed in Cleveland in 2014.

Writes the Guardian: “Criminologists, civil liberties activists and lawmakers said the arrangements created serious conflicts of interest at the heart of the criminal justice system’s response to killings by police.”

“Prosecutors work with police day in, day out, and typically they’re reluctant to criticise them or investigate them,” said Prof Samuel Walker of the University of Nebraska. Describing as a cause for concern the case of Omaha Officer Alvin Lugod, where the prosecutor declined to indict him for shooting an unarmed man in the back, Walker said: “A major change in our standard legal practice, and the structure of our criminal justice system, is required.”

So now the DA’s office has hired a police officer involved in one of those controversial shootings to be one of its Deputy DAs.

“I know how the system works, how it’s supposed to work,” said Laurie Valdez, the domestic partner of the victim in the San Jose incident.  “I am so devastated. They’re still getting away with it.”

“I did not see Antonio make any aggressive move in the video,” Asian Law Alliance executive director Richard Konda said after viewing the video. “I think charges should be filed in this case.”

The message that the DA now sends, not only by its charging and lack of charging decisions and now by its hiring decision, is that it is not going to take the issue of police violence seriously.  All of the protesters who came out on Sunday in Woodland and Tuesday in Davis are justified in their skepticism and, going forward, this will remain a critical case in point.