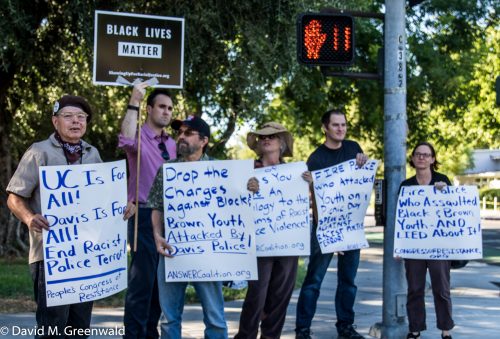 The main action from Tuesday night was for the council to name Kathryn Olson and Barbara Attard as police oversight consultants.

Back on July 11, Mayor Robb Davis moved forward a plan to hire a short-term consultant to review the current police oversight system, then have a public input process in order to implement a new one.

The plan calls for the consultant to review the current system, historical documents and recommendations already made by the Human Relations Commission. The consultant would also participate in up to five public or sponsored forums as a content expert. The forums would be used to solicit input from the community on the goals of oversight, guiding principles, and key desired processes for oversight.

The consultant would recommend one to three options that would seem to fit in Davis given size, history of policing, and community needs, and would include a model contract and scope of work for ombudsman/auditor and details of the role of any other entities and how they might change from what is currently in place.

However, this process is expected to take time, with a goal of having the information gathering and review phase completed by February 16, 2018, with a report prepared by March 31 and a presentation to council completed by April 30.

That would have left the city without a police auditor from June 30 when Bob Aaronson’s contract expired to April 30, at the earliest – a period of ten months.

Councilmember Rochelle Swanson asked if an interim auditor was something we could do, as “April is quite a ways away.”

Assistant City Manager Kelly Stachowicz said, “Our thinking was that if we did need additional assistance that we could draw on our resources at Best Best & Krieger (the firm that employs the

city attorney) but we didn’t want to hire somebody and then have to change the system.”

“I’m interested in being able to do an interim, we do interim things all the time,” Councilmember Swanson said.  She said that you simply let the people coming in know that they are interim and will only be around as a stop-gap measure.  I’m very interested in putting that out there, if it’s something that we can do quickly.  Not only do I think it’s right we should it, but I think it sends the right message to our community  that yes we are trying to move these things forward expeditiously but also be thoughtful about how we’re doing it – making sure we have qualified people.”

Lucas Frerichs said, “I support that as well.”

One possibility is that the city expand the role of Barbara Attard and Kathryn Olson to act as interim auditors in addition to their role as consultants.

Barbara Attard and Kathryn Olson both have vast experience in the area of police oversight.

Ms. Attard currently works with the San Francisco-based Accountability Associates, and has served as the San Jose Independent Police Auditor and in police review positions both in Berkeley and San Francisco.

She also worked with UC Davis on recommendations for their police department after the pepper spray incident in 2011.

Kathryn Olson, who received her undergraduate degree from UC Davis, also has a long professional history working in the police oversight field. A practicing attorney, Ms. Olson is currently a principal at Change Integration Consulting, focusing on police accountability issues.

Previously, she held positions as the Director of the Office of Police Accountability in the city of Seattle and with the Equal Employment Opportunity Commission in Seattle and Los Angeles.

Mayor Robb Davis prepared a paper that fleshed out his ideas and thoughts about what a process to determine appropriate police oversight might look like.

In that six-page paper, he wrote that “the ultimate end (goal) is to create a police accountability system that increases transparency, builds trust, and fosters policing practices and policies that create public safety for the entire community. This accountability must involve both the police as an agency and the behavior of individual officers.”

Robb Davis quotes from The New World of Police Accountability, by Samuel Walker, that “that the police have legitimacy when they enjoy the understanding, trust, and support of the people they serve… Legitimacy takes a comprehensive view of policing, looking at individual officer conduct, police departments as organizations, and relationships with the entire community.”

The purpose of this process, Mr. Davis writes, is “[t]o bring a diverse group of Davis stakeholders together with police oversight experts to learn more about oversight options and elements and develop a set of guiding principles for police oversight and several models or options for oversight that fit the needs of the community.”

In particular, he notes that “community members help define key guiding principles that will form the foundation of police oversight” while “[u]nder-represented populations within the City also help define guiding principles and oversight elements, but also deepen the broader community’s understanding of their experience of the police in Davis.”

The goal, as stated above, is to have the information gathering and review phase completed by February 16, 2018, with a report prepared by March 31 and a presentation to council completed by April 30.