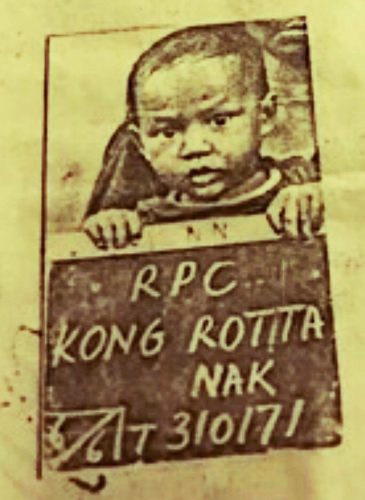 It has been a rough few weeks for Chen Kong-Wick who learned on October 19 that her 39-year-old brother Rotta Nak Kong was picked up in his Davis home by ICE.  He had taken that day off work because the family was making a decision as to whether they should pull their sister off life support.

Mr. Kong is being held in Louisiana.  He was interviewed yesterday by the Cambodian consulate, and Ms. Kong-Wick and her family “are waiting to hear what’s next.”  She told the Vanguard, “It’s pretty sad and nerve-racking because you live a life of just uncertainty.

“There are moments when we cry, when we get angry and you feel helpless,” she said.

“That led some of the community in Cambodia to rise up,” she explained.  “That was the recipe where the (Khmer Rouge took over Cambodia) and within four years over two million people died” at the hands of Pol Pot and the Khmer Rouge government.

“We had, what we called, forced migrations,” she explained.

“My parents had a total of 11 children,” she said.  An older brother died of starvation.  She also lost her twin sister.

She explained that her father, who was in the military, lied to being only a taxi driver.  She attributed his keeping her family alive for four years to his military survival skills.

“To me I feel like it’s such a disgrace,” she said.  She explained that both her parents have passed away and part of their commitment, especially for Mr. Kong, was to take care of their younger brother Sam, who is mentally ill.  “My family was fragile already,” she explained.  And now with these latest happenings, “My family is just torn apart.”

“The office of resettlement never had a transition plan for us to become citizens,” she said.  She didn’t realize that her Green Card had expired until she was in high school working at Taco Bell.  “My manager said, hey

Chen, surprise, you can’t work here, you need to go.”

“To me that was the first awakening that permanent residence wasn’t permanent,” she said.  “It took me several years to finally understand – I did not know that my card didn’t give me access to all the privileges of being a citizen.

“Eventually I did,” she said.  “The path of getting citizenship was pretty hard.”

Her brother was among over 2000 Cambodians living in the United States who did not know that their Green Card was expired.

The family is now working with Holly Cooper and the UC Davis Immigration Law Clinic.  Marcella Obeid is a second-year law student working with the Clinic and working on this case.

The problem that is compounding this issue for Rotta Nak Kong is that he has a record.  His offense was for joyriding when he was 24 years old, a felony.

“That is what is making him deportable,” Ms. Obeid explained.  “ICE is now using that as the basis for his removability.”

Their strategy right now is to attempt to vacate the conviction from 2003 by a California statute, Penal Code section 1473.7.  The law was signed last year by Governor Jerry Brown and creates a new motion to vacate criminal convictions based on “prejudicial error damaging the defendant’s ability to knowingly accept or defend against the actual or potential adverse immigration consequences of a plea of guilty or nolo contendere” or new evidence of actual innocence.

In this case, they are arguing that the prior defense counsel, in Stanislaus County, “was ineffective and failed to warn their client that their plea deal could have adverse immigration consequences.”

“Our client Kong here, he wasn’t warned that a simple joyriding offense could have him wind up in removal proceedings,” she explained.

She said, “We already have a strong case that his counsel at the time didn’t even bother to look at the immigration consequences of the plea deal he took in 2003.

“Our first step will be to remove that conviction,” she said.  Once that is gone, “there will no longer be a basis for his removability and hopefully he will be home soon.”

Ms. Cooper, who heads up the Immigration Law Clinic, feels pretty good at her chances.  “So far I haven’t lost one of these,” she said.  “The lawyer here has clearly stated that they didn’t advise him of his immigration consequences.  Clearly, according to the Supreme Court case, that is unconstitutional.

“The harder piece is always showing there was prejudice,” she said.  “That he could have had a different result had he been advised.”

The Clinic will need to show that there are other statutes that he could have pled to that would have been amenable to a DA and which would not have made him deportable.

“Such as just taking one day off his sentence – he wouldn’t have been deportable,” Holly Cooper explained.  “Hopefully we can convince a judge that we could have convinced a DA that you’re not going to send a man who came here under these circumstances back to his home country for one more day in county jail.”

Holly Cooper called this case a reminder that “we are exporting wars and as a result of our wars we have a social obligation to individuals and there’s trauma that they have and there may be reasons why people seek… different remedies because of trauma.”

Holly Cooper explained that ICE moved Rotta Nak Kong to Louisiana and said that they will keep him there for a bit and then possibly move him back.  The good news is that the sister is now doing better and has since been released from the hospital.