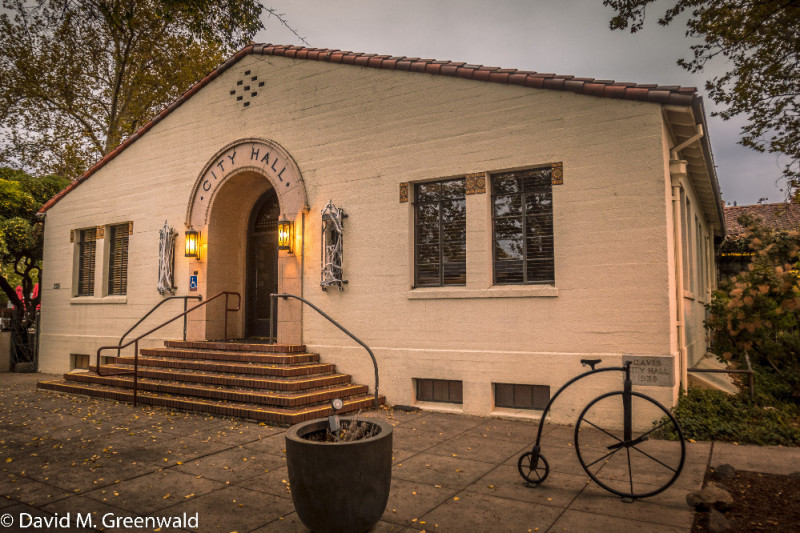 (From Press Release) – The Successor Agency to the Davis Redevelopment Agency on Tuesday accepted an offer from a highly experienced local commercial real estate owner/developer to buy the Historic City Hall building in downtown Davis for $3.5 million.

The offer, from Engstrom Properties, came as a result of a highly competitive disposition process that began last spring.  Engstrom Properties owns and operates several high-quality commercial properties in Davis, including the Covell Shopping Center and El Macero Center in south Davis.  Both retail properties are anchored by a Nugget Market.  The company also owns, operates and renovated the historic Hotel Woodland in downtown Woodland.

Engstrom Properties was chosen based on its competitive offer price, proven track record of owning and operating high-quality commercial and historic properties, extensive commercial leasing and property management staff, vision for the property, dedication to maintaining the historic integrity of the building, and understanding of Davis community values.

“We feel Engstrom Properties will be an excellent steward for our Historic City Hall building and are confident they will exceed our expectations,” stated Mayor Robb Davis.

Late last year, the State Department of Finance (DOF) notified the Davis Successor Agency that it had to sell the Historic City Hall building.  The sale was required under a 2012 state law that

dissolved all California redevelopment agencies and forced them to dispose of all their assets.  DOF and the Successor Agency’s Oversight Board still need to approve the sale to Engstrom Properties.  City staff anticipate these approvals before the end of the year.

The building is a state historic landmark, which means its exterior historic features are protected.  Any proposed changes to those features require City approval.  In addition, the City will record a deed restriction requiring City approval for any proposed changes to the building’s interior historic features.  The City will retain ownership of the two art pieces on the property.

Engstrom Properties is owned by Yolo County resident, Mark Engstrom.  The company has a proven track record in the Sacramento region renovating historic properties, owning and operating restaurant and retail properties, and shepherding transactions through DOF.  In addition, Engstrom Properties employs an urban leasing team who works in places like Portland, Austin and Seattle.  This team will be working to activate the area and make the property a family-oriented community gathering place.

The current tenant in the Historic City Hall building, Bistro 33 restaurant, has eight years left on its lease.  The new owners can maintain the lease or negotiate a buy-out of the lease.