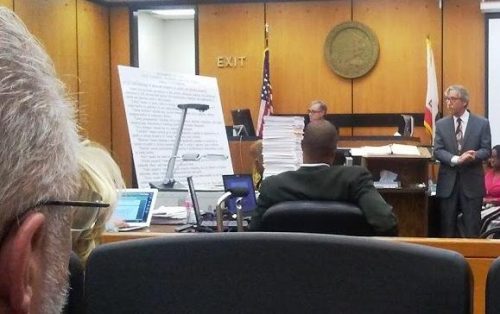 A Sacramento jury met the “Batman and Robin” of the Sacramento Police Department Tuesday as a civil suit by homeless plaintiffs against the City of Sacramento challenging the constitutionality of a controversial “no-camping” ordinance moved into the second day of its second week.

Among other revelations Tuesday, the former SPD officer nicknamed “Batman” by the homeless community testified that the homeless are “victims,” tormented by even law enforcement.

This statement came as the City of Sacramento presented its defense in an attempt to thwart a spirited case by homeless plaintiffs’ attorney Mark Merin.

But the City’s case included surprising testimony by officers – those charged with solving the homeless crisis – who criticized the no-camping ordinance, and supported a Safeground for the homeless.

In fact, Plaintiffs claim the city’s “anti-camping” ordinance has been – for 22 years – selectively enforced against the homeless, and virtually no one else, in Sacramento, and is unconstitutional. Both sides have stipulated than more than 4,000 citations have been issued in recent years under the law – all but a few against homeless.

The lawsuit began in 2009 when a small homeless community, referred to as the “Safeground Pioneers,” was arrested for camping on a private lot of land, despite having permission from its property owner. The individuals were arrested under Sacramento’s no camping ordinance.

First up Tuesday was Michael Cooper (nicknamed “Robin” by the homeless), now a Sacramento County Sheriff Deputy, but formerly a Sacramento police officer. He  worked with another SPD officer, Mark Zoulas (aka, “Batman”), now retired.

Both former SPD officers were called by the defense, the City, but their testimony emphasized how unfair the no-camping ordinance is to the homeless, and they detailed how they supported the homeless, even helping them avoid arrest under the law. They criticized the law, sometimes not mincing words.

“We would tell them where to go so they wouldn’t be arrested,” confessed Cooper. “We didn’t think a citation or arrest would stop them from being homeless. They just needed a place to go. We were police for the homeless,” noting his partner and he would try to protect homeless from “bullies” and others who would rape, rob and even murder them.

Zoulas said he was brought in to solve the homeless “problem” in 1996 and handpicked Cooper to help him. “I thought I could drive them off the river in three months” through enforcement, he said.

That wasn’t the case, Zoulas said, and he had a “major change” in attitude eventually when “I saw all these people were suffering…I tried to find a way to make life less miserable for them. I

realized these are human beings, and you can’t force them to do something and make them more miserable,” he said.

“They have to be somewhere. They take up space. But there is nowhere for them to go,” Zoulas said, adding that he avoided ticketing or arresting the homeless. He said he would take some in the homeless community for breakfast and lunch, and “help them move their stuff, get to court dates.” He said he would “hang out” at their camps, and distribute Christmas gifts to them.

“We became friends, and we had a partnership with the homeless. We gave them time and assistance. In the end, the homeless need a place to go. They are victims, abused by citizens, who torment them and to be honest, they can be tormented by law enforcement,” he said.

Cross-examined by Merin, Zoulas acknowledged he suggested places for the homeless to camp – even if it was illegal for them to do so.

“They just have no place to go. When I had to arrest them for breaking the law, I felt terrible. I support a Safeground for the homeless,” the “Batman” Zoulas said, adding he later, upon retirement, volunteered at Loaves & Fishes to help the homeless.

Closing arguments are expected Wednesday afternoon in Dept. 1 and then the jury retires to deliberate.