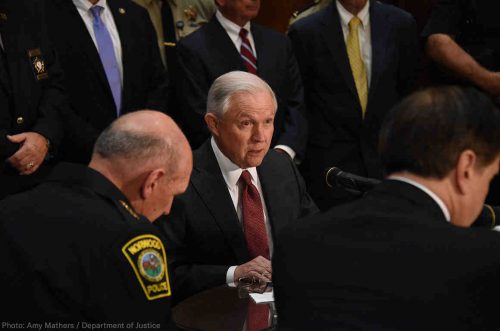 On Friday, Attorney General Jeff Sessions strongly hinted that he isn’t done trying to roll back the civil rights gains made during the Obama administration.

In a speech before the conservative Federalist Society’s National Lawyers Convention, Sessions described an internal Justice Department memo he signed prohibiting his department from issuing “improper” guidance documents. According to the document, “Effective immediately, Department components may not issue guidance documents that purport to create rights or obligations binding on persons or entities outside the Executive Branch (including state, local, and tribal governments). The document also stated the Justice Department will no longer issue guidance that “effectively bind private parties without undergoing the rulemaking process.”

Behind this bureaucratic language is an attack on the civil rights legacy of the Obama-era Justice Department. Throughout the Obama administration, the Department of Justice worked with state and local governments to protect civil rights and liberties by suggesting practical ways, for example, to eliminate gender bias in policing, legally enforce fines and fees, and dismantle the school to prison pipeline. Sessions has indicated that he may “repeal and replace” these policies, which will roll back important efforts to ensure equal protection for all under the law.

Here are the ones we believe are in Sessions’ crosshairs.

The ACLU worked for many years with the Obama administration to issue new guidance to curb racial profiling by law enforcement agencies. That guidance, announced in 2014, addressed the use of other characteristics as well, including national origin, gender, gender identity, religion, and sexual orientation. Although it was a step in right direction, it did not fully respond to the crisis of racial profiling in America. Now, even this modest guidance is in jeopardy.

With advocacy from the ACLU’s Women’s Rights Project, the Obama administration made significant strides in helping state and local law enforcement agencies address gender bias in their response to sexual assault and domestic violence. A Justice Department guidance issued in 2015 highlighted the need for clear policies, robust training, and responsive accountability systems so that women and men will not end up like our client Jessica Lenahan.

Jessica’s estranged husband, Simon Gonzales, kidnapped their three daughters from the front yard in Castle Rock, Colorado, in violation of a domestic violence order of protection. Jessica called and met with the police numerous times in the immediate hours after the kidnapping, but they told her to call back later if the children hadn’t come home. Early the next morning, Simon drove up to the police station and started shooting. The police fired back, killing him and later discovered Jessica’ three daughters dead in the cab of his truck.

This work to advise local police departments on how to improve domestic violence investigations, treatment of survivors, and accountability for officers who commit domestic violence and sexual assault may no longer be supported by Sessions’ Justice Department.

After the death of Michael Brown in Ferguson, Missouri, the Justice Department launched a six-month investigation and found a “pattern or practice” of police misconduct in Ferguson that violated the First, Fourth, and 14th Amendments of the Constitution and federal law. The report concluded that Ferguson police engage in racially biased policing, regularly targeting and harassing African-Americans.

For one African-American resident, a $151 parking ticket turned into six days in jail and a $1,091 fine. In 2013, over 9,000 arrest warrants were issued in Ferguson for parking infractions, traffic tickets, or housing code violations. All told, the city collected nearly $2.5 million in revenue from fines and fees.

In response to these findings, the department issued a “Dear Colleague” letter in 2016 to state and local courts to ensure that fines and fees were not being enforced illegally. The Justice Department’s work on the issue of illegal enforcement of fines and fees is now in danger of reversal under the Trump administration.

In 2014, the Justice Department and the Department of Education issued very detailed guidance to help states, school districts and schools develop practices and strategies to improve school environments. Each year, significant numbers of students are suspended and expelled for minor infractions of school rules. Students of color and with disabilities are disproportionately subject to school suspensions. This guidance gave schools resources to create safe and positive school settings. Now this guidance may also be in jeopardy.

Sessions’ memo is nothing less than an agenda to wipe out progress made in recent years in protecting the rights of people of color, those with disabilities, and women who are survivors of domestic violence among others. We can’t let that happen with these hard-earned improvements.

Jesselyn McCurdy is with the ACLU Washington Legislative Office