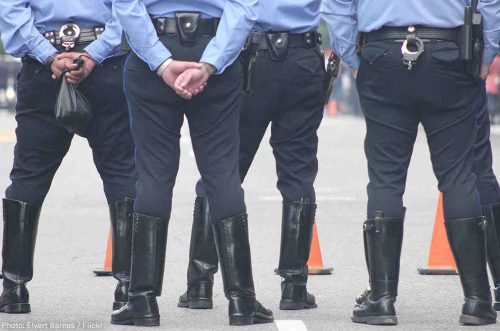 Families in Louisville, Kentucky, are rightly calling for an end to police in schools following the recent assault on two Black students perpetrated by law enforcement at a local high school that was caught on camera.

Before the video begins, two students at Jeffersontown High School were said to have been in a fight over a pair of headphones when a police officer intervened. He reportedly called for additional officers after being attacked by the student. The video clip shows three police officers on top of a teenager. One officer presses the teen’s head into the linoleum floor while another holds his legs, and the third can be seen kicking him multiple times. As students look on, some crying out for the police to stop, an officer waves what appears to be a stun gun at the onlookers. The stun gun had reportedly been used on the detained student.

As the video comes to an end, someone can be heard telling the student to turn off the recording.

Outrage at the incident started within the community and was then shared widely on social media after activists posted video of the disturbing incident on Twitter. This assault on students of color at a high school by police represents the latest evidence that police do not belong in our schools.

Videos have allowed the public to witness the reality of police conduct behind school doors — and to see that all too often it takes the form of misconduct and assault. Sadly, the brutality at Jeffersontown High School is not an isolated incident or a new phenomenon. To the contrary, police have a longstanding history of using force against students who went to class for an education but

instead received a harsh lesson on racial injustice and police brutality.

This history includes incidents leading to ACLU lawsuits. In 2015, the ACLU sued the Kenton County Kentucky Sheriff’s Office after video captured officers shackling elementary school students with disabilities. The same year, video captured a school police officer violently assaulting a student at Spring Valley High School in South Carolina — an incident at issue in another ACLU lawsuit. Following these incidents, the Advancement Project searched for similar incidents and recorded 20 such assaults since 2015. Recently, the ACLU identified 141 public complaints of police use of force in schools from 2014 to 2016.

And just as with adults, there are racial and disability disparities in the way police engage in enforcement in schools. Accordingly, students of color, students with disabilities, and students of color with disabilities are more likely to be funneled into the criminal justice system for behavior that may warrant supportive interventions or a trip to the principal’s office, not a criminal record. And this has grave consequences for students’ futures. Youth who are criminalized by police in schools are more likely to drop out of school and to be sucked back into the maze of the criminal justice system as adults. In this way, the school-to-prison pipeline, the practice of funneling children from school into the criminal justice system, undermines the goals of education and can derail a young person for life.

But communities and educators are demanding change and the removal of police from schools.

Following this latest incident, the Louisville community has called for an end to the district’s contract with the police department. Community leader Barbara Boyd reflected, “We send our kids to school to become useful citizens, not to be controlled through brute force.” At least one school board member shares the community’s concerns. “It’s hard to imagine how students who had a taser pointed at them and saw their classmate or friend being aggressively handled by three police officers, how they’re going to have a positive view of law enforcement,” said board member Chris Kolb.

Instead of reliance on police force, those calling for change in Louisville want the school district to focus on approaches that research supports as positive ways of creating a safe school climate, such as restorative justice and the use of de-escalation techniques. This is a smarter form of justice that not only makes sense — it’s what the most vulnerable among us deserve. Parents and community leaders across the country should pay attention to what’s happening in Louisville, Kentucky, and follow suit. Police have no business in our schools.