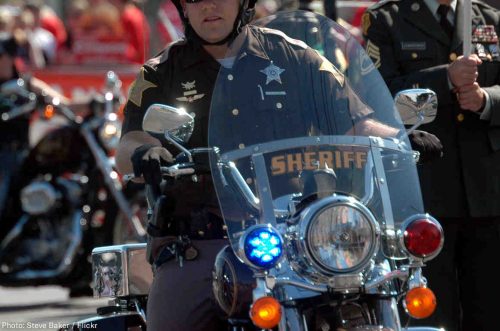 The federal program that delegates immigration enforcement duties to local police is about to expand to as many as 24 additional jurisdictions across the country. The program, known as 287(g), deputizes state and local police to carry out federal immigration enforcement orders. After several years of decline, these arrangements are growing again under the Trump Administration.

Sixty jurisdictions in 18 states have existing agreements under 287(g). This week Immigration and Customs Enforcement began the process of reviewing applications for 24 more jurisdictions, most of which have troubling civil rights records.

One of the jurisdictions that submitted an application is Alamance County in North Carolina. In 2012, the Department of Justice filed a civil rights lawsuit against the Alamance County Sheriff Terry Johnson. Following a two-year investigation and interviews with more than 100 witnesses, the department found widespread evidence that the Alamance County Sheriff’s Office was systematically and unlawfully targeting Latino residents for investigation, traffic stops, arrests, seizures, and other enforcement actions.

An expert’s statistical analysis found in Alamance County some of the highest rates of racial profiling ever documented in the United States. The expert, whose work was commissioned by the Justice Department, found that along three major Alamance County highways, Johnson’s deputies were up to 10 times more likely to stop Latino drivers than similarly situated non-Latino drivers.

Witnesses testified about numerous incidents in which Johnson and other sheriff’s office employees used racial epithets and expressed extreme prejudice toward Latino residents. For instance, Johnson allegedly ordered deputies to “bring me some Mexicans,” “put heat on” predominantly Latino neighborhoods, and “go out there and get me some of those taco eaters.” Deputies were accused of sharing links to what the Associated Press described as “a bloody video game where players shoot people entering the country illegally, including children and pregnant women.”

Perhaps what was most disturbing was that until the federal government announced the findings of its investigation in 2012, Sheriff Johnson’s office was among six counties in North Carolina receiving funds through

the federal 287(g) program. Under that agreement, Johnson’s deputies were empowered to arrest and detain people suspected of immigration violations and hold them in custody for potential deportation. Witnesses reported times when Johnson told subordinates, “if you stop a Mexican, don’t write a citation, arrest him.”

Under the law, police cannot question and arrest someone based on the way they look or their background. We live in a country in which the Constitution guarantees all people equal protection and fair treatment under the law regardless of their skin color or accent. Discriminatory profiling does not make us safer. It is illegal and erodes trust between law enforcement officers and the communities they are supposed to serve and protect.

After the department’s egregious civil rights abuses were exposed, the federal government terminated its 287(g) agreement with Alamance County in 2012, and the sheriff’s office was stripped of its authority to investigate potential immigration violations by individuals detained in the county jail.

Despite a mountain of evidence about the department’s discriminatory practices, in 2015 a federal judge ultimately dismissed the case against Sheriff Johnson but still admonished his office for some of its behavior, including the frequent use of anti-immigrant epithets and slurs during official department business. The sheriff’s office later signed a settlement agreement with the Justice Department to mandate better training and policies for bias-free policing, though it is unclear what, if any, reforms have been implemented.

Now, five years later, Sheriff Johnson is still in office, and there is a new administration in Washington. If the applications to Alamance and the other jurisdictions with troubling records are granted, these sheriffs and deputies will spend local funds to subsidize federal immigration enforcement and receive taxpayer money to participate in the Trump administration’s deportation force. And in the case of Alamance, it will happen with virtually no restraints or consequences suffered after a well-documented history of civil rights abuses against Latinos.

The Department of Homeland Security must reject Alamance and other applicants with dangerous civil rights track records. The federal government should never partner or fund law enforcement departments that have such records of constitutional violations and anti-immigrant animus.