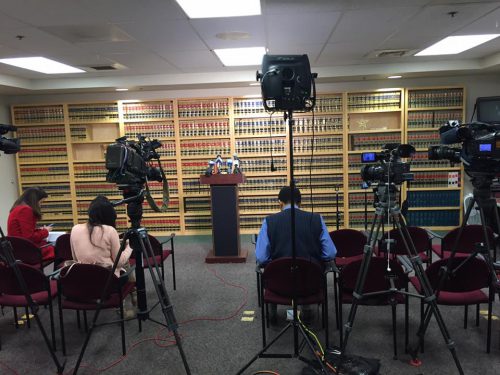 During a press conference on Tuesday, District Attorney Jeff Reisig said, “This is not a happy day.  Baby Justice Rees is dead and nothing with bring him back.”  But he said that “this is a day where justice has finally prevailed.

On the eve of what would have been a contentious and lengthy trial, 31-year-old Woodland resident Frank Rees pled no contest to three charges in connection with the death of his infant son, Justice Rees. Rees pled no contest to felony abusing or endangering the health of a child, involuntary manslaughter, and administering a controlled substance (to Samantha Green).

Mr. Rees had faced a maximum sentence of nine years had the case gone to trial and he had been convicted.

Baby Justice was 19 days old when he died from environmental exposure due to neglect on February 23, 2015.  His mother, Samantha Green, was convicted of second-degree murder a year ago September and

sentenced to 15 years to life after a lengthy trial.

Jeff Reisig said that the successful prosecution of Ms. Green was “not the end of the case.”  He argued, “We all believed that Frank Rees contributed to the events that led to the death of Baby Justice that cold night in that slough in Yolo County.”

He called prosecutions like this very difficult, very rare and “almost unprecedented.”

Ultimately, he explained it was evidence that Frank Rees was providing methamphetamine to a new woman who was pregnant “that triggered our decision to file.  We simply could not wait any longer.  It was the right decision.  And hopefully Baby Justice can finally rest in peace.”

In response to the question of how long he will actually serve, Mr. Couzens explained that was a complicated question.  Mr. Rees was arrested back in February and he will be entitled to that time in terms of custody and conduct credits.  “He is eligible for parole after a certain point as well,” he explained.

Mr. Couzens explained that there was a significant development in the trial today in that the judge allowed evidence in of Mr. Rees’ meth usage after the death of Justice Rees.  He explained, “Part of our case involved presenting evidence of things that occurred not only before the death of Baby Justice – to show this conscious disregard for life that is necessary to prove manslaughter.  But also we were trying to show events that occurred after the death of Baby Justice.”

Mr. Rees was found with meth on March 5, a couple weeks after the death, and he was contacted in February 2017 at the same address with a new girlfriend – they both had meth on their person and she was pregnant.

Mr. Couzens wanted to introduce those acts “to show that Mr. Rees had that indifference to life at the time of Justice Rees’ death and the court agreed with us on that theory and allowed that evidence to come in.”  Mr. Couzens felt that would allow the jury to hear more and get a broader perspective on everything that shows Mr. Rees’ mental state at the time of his son’s death.

“It’s not unusual for someone to plead after there’s been a significant development that would affect their chances of success at trial,” he said.  He said that while it was not a complete surprise given the ruling, they were not particularly expecting him to plead.

Supervising Deputy DA Rob Gorman reiterated that “these cases are not easy.”  He said, “A child who is killed, especially the way that little baby passed away, it’s awful.”  He said this case has lived with the prosecution team since the day the baby was found in 2015.

He said, “All through the prosecution of Samantha Green, we had our eye on Frank Rees.”  He said, “What we needed was a theory under the law that would attach responsibility to Frank Rees for the death of his child.”

Two months after Ms. Green was sentenced to life, the sheriff’s department contacted Mr. Rees at his parents’ home, finding him with three grams of meth, “which is a significant amount of methamphetamine” and “he was in the company of a woman who described herself as Frank Rees’ girlfriend and she was eight months pregnant.”

He said, “When we received that information we know how that movie ends.  It ends in the death of possibly another child.”

At that point they got to work to find a theory under the law allowing them to charge Frank Rees for the death of his son.  “We went after that case full force,” he said.

Mr. Rees will be sentenced on December 5 to six years in state prison.