On Monday, the Social Services Commission listened to roughly an hour of public comment, much of it from students telling stories of unaffordable rents and living in cars and on couches due to shortages in rental housing in Davis.  The commission’s task was to evaluate the new LincolnLift affordable program designed for low-income students.

According to the proposal, the affordable housing program would designate 71 beds, integrated into the rest of the Lincoln40 project as affordable for low and very low income.

As Paul Gradeff, the project manager, explained, Lincoln40 has already gone from single occupancy to double occupancy after  “we determined there was a significant need for affordability by design.”

He told the commission there was a need to have an integrated on-site affordable housing program.  And as Vanessa Errecarte explained, it was privately subsidized, allowing students to qualify.

However, several of the commissioners had overall issues with the project, with Claire Goldstene stating that “I am not a huge fan of this type of project.”  Instead, she argued, there was a need for a variety of different kinds of housing, for both market and below-market rate.

She saw this project as being perpetually student housing and “not flexible for the community.”  She added, “I would also like to see an increase in the number of affordable units.”

Tracey Tomasky, the Commission Chair, said, “This is clearly an innovative project, but innovation in and of itself is not enough to go on.”  She said, there is a need in Davis to go beyond student

projects, and once again, this project is not flexible.  She and others expressed concerns about the one-bedroom, one-bathroom design.  She said, “I am not a fan at all of this project.”

However, city staff said that while these would be very helpful comments if this were the Planning Commission, the purview of the Social Services Commission is simply to evaluate the applicability of the affordable housing component.

Along those lines, Georgina Valencia moved to consider the LincolnLift program with three caveats: (1) additional money for the housing trust fund, (2) a longer window of 60 days to apply to the program and (3) a higher number of affordable beds.  It was seconded by Claire Goldstene.

He said that Lincoln40 was a logical place to have a student type of community, filling a critical need in the city.  He added that the denial of this project was not going to change the calculation of the university and that they shouldn’t put a moratorium on every project hoping to force the university’s hands.

Mr. Wise was appreciative of the affordability by design for the double-occupancy rooms, and reasoned that having 71 beds is useful to put a dent into the needs in this community.

Ultimately, he and Bernita Toney voted against the motion, but the motion passed 4-2.

A number of questions came up and one of them was how the figure 71 was arrived at.  Paul Gradeff explained that the affordable housing program was based on council and city staff direction that wanted to see more housing on-site.  He said they started by looking at 28 units and then converted that number of units to beds using Sterling as a guide.

Ash Feeney, in response to questions from commissioners, said that they can demand a higher number of affordable units in the project, but he noted that not a lot of the multifamily projects have produced 35 percent.

He explained to the Vanguard, “The Lincoln40 project proposes a rent by the bed concept, that includes many market rate double-up rooms.  Other apartment proposals rent by the bedroom (Sterling) or by the apartment unit (more traditional). Part of the Lincoln40 narrative is they are offering a more affordable option for students by design by including double up rooms as part of their program.”

He said, “The City’s inclusionary housing ordinance requires 35 percent of units be affordable (not beds or bedrooms) and a consultant analysis is currently underway to study the viability of this requirement while also addressing new rental models we are seeing.  Other apartment projects have met or propose to meet their affordable housing requirements on a unit basis by providing micro studio units, one, two, and three (to a lesser extent) bedroom units to meet their requirements. Rather than restricting a number of smaller sized units, Lincoln40 proposes to rent to their affordable residents by the bed to ensure there is no distinction between their market rate residents and their affordable residents.”

The city created a side-by-side comparison between Sterling and Lincoln40. 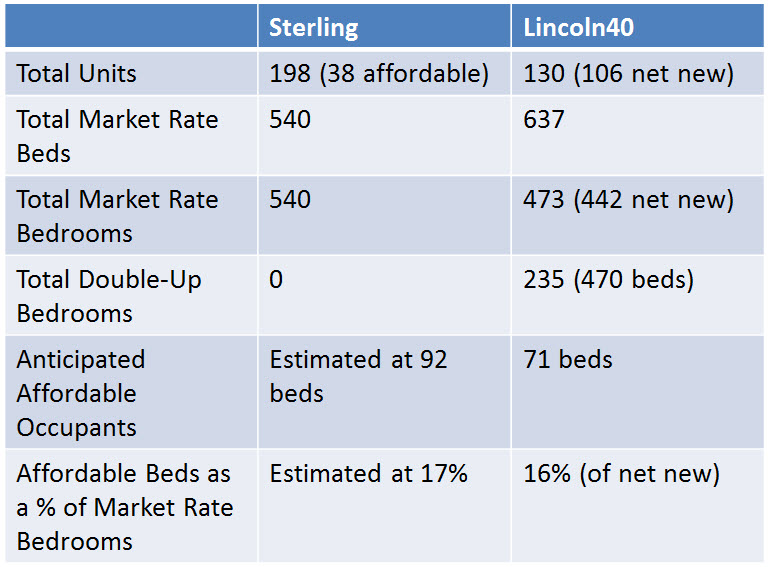 From a legality perception, Mr. Feeney told the Vanguard, “The proposed LincolnLift program is being vetted through staff and the City Attorney.”

The attorney hired by the development team, Karen Tiedemann, told the commission that they looked into the legality issue on behalf of the developer.  She reasoned that students are not a protected class themselves and that, from a legality standpoint, a key question is whether this project would have a disparate impact on some protected group.

She argued no, that the courts in limited decisions have found that restricting housing to students does not impact protected classes.

That combined with the fact that this project would be privately subsidized, coupled with the severe need for student affordable housing, allows them to proceed.

Ash Feeney told the Vanguard, “Staff believes the fully integrated affordable program is an interesting concept that could help address concerns that are voiced by student community members who desire affordable housing solutions that are currently unavailable to them.”

He added, “We are looking to get feedback from the Social Services Commission on the proposed program before making a staff recommendation to Planning Commission and City Council.”

Mayor Robb Davis sat through the meeting and told the commission that the council was already evaluating the 35 and 10 percent requirements.  He said that the council at a recent workshop was clear that they were not looking for in-lieu fees from projects like this.  Instead he said, “we want units – beds and units to be provided.”

He pointed out that the city had added no new market rate multi-family housing in 12 years.  He called this a new and innovative approach and believes that this gets the city real beds at a permanently affordable rate.

He added he would like to push to get the maximum number of affordable units that are possible.