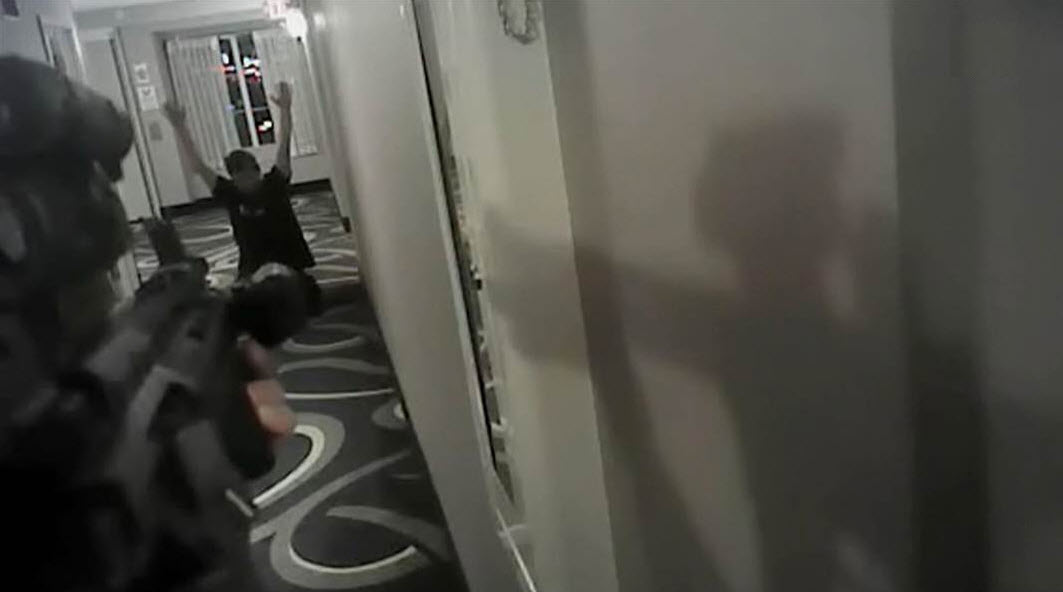 Two words stick in my mind when I think of the video of Daniel Shaver begging for his life before he was shot and killed by Officer Philip Brailsford of the Police Department in Mesa, Arizona. The two words were written on the dust cover of the AR-15 rifle Braisford used to kill Shaver:

We have seen this movie before. Daniel Shaver was not armed or committing any crime when was he shot to death by Brailsford. Like many previous police shooting videos, this one shows police behaving much more aggressively than Mr. Shaver. And like previous videos, a jury acquitted the officer of all criminal charges. But this video showed us two things about policing culture in America that stand out. First, the video shows Shaver begging for his life while he tried to follow contradictory instructions screamed at him by an officer. And Shaver was white.

Shaver had a job killing pests. Sometimes he used a pellet gun to get the job done, and he was seen holding the gun by people at the hotel. When the police were called, they were told a man had a gun so they had to be careful.

I get it. But how far does that information take us?

At trial, the officer emphasized the danger of a potentially armed person and claimed that what he did was consistent with his training. But if that ends the inquiry, it will be almost impossible

to convict a police officer of a crime for shooting anyone. There is an argument that this is already the reality in America.

In the 12 years between 2005 and April 2017, only 80 officers have been arrested on murder or manslaughter charges for on-duty shootings, according to work by Philip Stinson, an associate professor of criminal justice at Bowling Green State University in Ohio. The Washington Post reported that between 2015 and 2017 police shot and killed 2,884 people. Police shoot and kill numerous people every year and are hardly ever held accountable.

Shaver and a companion had been ordered out of a hotel room and told to get on the floor. The video shows him being neither hostile nor resistant. On the video you can hear one of the officers screaming, “If you make a mistake, another mistake, there is a very severe possibility you’re both going to get shot … if you move, we are going to consider that a threat, and we are going to deal with it, and you may not survive it.” The police are screaming that the cost of a mistake is death — what kind of training teaches that as a proper way to deal with people?

Do you think an innocent person might get nervous if an AR-15 was pointed at him while the police officer was screaming commands, including, “Make a mistake and I will kill you?” Would you get nervous?

Not only was the officer shouting in a very hostile voice, the orders were contradictory. “Do not put your hands down for any reason,” he tells Shaver. “Your hands go back in the small of your back or down, we are going to shoot you, do you understand me?” Shaver, who is now in tears, says, “Yes, sir.”

But immediately after, the commands change, “Crawl towards me,” and Mr. Shaver lowers his hands to the floor and begins moving toward the officers.

A few seconds after beginning to crawl, Mr. Shaver seems to twist slightly to his right, and as he does so someone shouts, “Don’t!” Officer Brailsford begins firing the first of five shots. As predicted by the other officer, Shaver did not survive.

There is no training that justifies the behavior seen on the video. Screaming at a person that is crying cannot be a legitimate technique for officer training. And if Shaver did something threatening, why was Brailsford the only officer who fired his weapon, not just once or twice, but five times?

And Daniel Shaver was white. Deliberate or unconscious racial bias played no role. Black or brown skin was not a proxy for a threat. This video demonstrates how far we have gone as a country in accepting the culture of police violence. Policing in America has advanced to the state where anyone can be killed for no good reason.

The jury that acquitted Brailsford did not hear about the two words that were on his dust cover because the judge excluded that evidence. The laws in virtually every state do a great job of protecting police. Snoop Dogg has said that policing in America is a “Resident Evil, it’s all on camera and they still don’t believe you.” This is the police/community relationship we have created for ourselves.

Discussion of police training is not unimportant — it can be the difference between life and death. Don’t assume that police violence will be limited to Black and brown people — the culture of violence will not exempt white people.

Eugene O’Donnell, a former police officer and a professor at John Jay College of Criminal, was quoted in The New York Times saying “What people as humans will see is someone drunk and emotionally distraught…The police will read that differently. In some sense it’s an argument without end: The police are just going to add this up a different way.”

Can any of us be safe in a society where police officers are trained to have a perspective that is other than human? How is it possible that a trained officer thinks the appropriate response to a mistake is five bullets from an AR-15? If Americans don’t work to change laws so that police can be held accountable for unnecessary violence, get ready for more executions and more brutal videos.