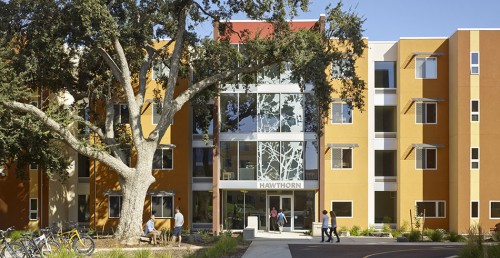 One of the complaints about the new mega-dorms is that they are “unaffordable” and even “luxury.”  However, as Ashley Feeney, the newly-promoted director of community development and sustainability for the city of Davis, told the Vanguard, “I wouldn’t classify the housing products as ‘luxury.’  I would say that they are ‘new’ market rate housing which typically can demand a premium in the marketplace beyond existing housing stock of similar product type.”

Moreover, as a recent article in the Bee shows, the cost of housing, even outside of Davis, is prohibitive.  The article from Monday noted the rise in the number of homeless Sacramento State students – an issue in Davis that students have raised in recent months.

The Bee published: “Rent near the university starts at about $1,000 for a studio or one-bedroom apartment, while some landlords charge $569 or more per bed.”

The Bay Area Economics (BAE Urban Economics, a private real estate consulting firm) group partnered with UC Davis Student Housing in the 2016 Apartment Vacancy and Rental Rate Survey and found the following for unit leases: the average rental rate was $1576 per month in 2016, which was a 5.8 percent

So, how much will a new rental cost?

Mr. Feeney explained to the Vanguard that the developers have not yet provided what their rents are estimated to be.

He explained that right now the top of the current Davis market is generally in the $2 to $2.25 per square foot range.  But, as he pointed out, there has been no new market rate housing built in the last 15 years.  While they are building Sterling right now, those units have not been built and thus have not come on the market.

He told the Vanguard, “Due in part to the higher development costs associated with greater required energy, aesthetic and amenity features in Davis, I would anticipate rents needing to be greater than existing products.”

He said a potential rate of $2.50 per square foot per month would represent a 10 to 20 percent premium for the new products.

He also pointed out, “Units that are of a larger square footage would typically have a lower price per square foot given that the rent is being spread over a greater amount of footage.”  He added, “Even for new product with a higher-level amenity package, I am sure they pay close attention to the range of rents and would want to be competitive with existing housing stock while recognizing a reasonable premium for the value add/new product.”

The bed lease units tend to be a bit cheaper.  According to BAE estimates, “the average rental rate for a bed lease, in units of all sizes, was $875 per month.”  That means you can, generally speaking, lease by the bed more cheaply than you can rent a studio apartment in Davis.

And what else is interesting is that the cost of bed leases actually decreased 3.3 percent since 2015.

Ashley Feeney believes, based on that figure, that a potential rate of about $1000 per month would accommodate the 10 to 20 percent premium for new proposed products.

Recall that the LincolnLift affordables would range from $670 for the very low income to $800 for the low income.  That would represent between a 20 percent to 33 percent savings from the market rate.  The $1000 potential rate is actually similar to the cost of a unit at UC Davis, which right now is about $1050 per month.

The best way to build in affordability is to increase the vacancy rate.  Not only are rents rising, but the survey from 2016 reports: “All survey respondents reported static or increasing rents, relative to 2015. None of the respondent complexes reporting lowering rents in 2016 in order to fill vacancies.”

22 thoughts on “Analysis: How Much Will New Apartments Cost for Rent? Not So Simple”