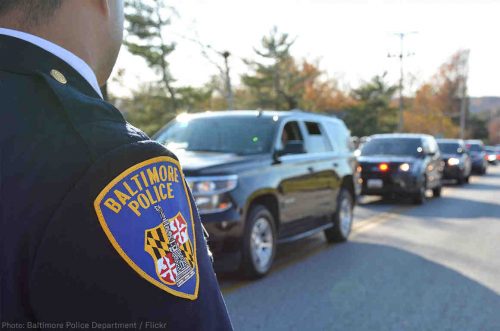 On Nov. 15, Detective David Bomenka of the Baltimore Police Department reported that his partner, Detective Sean Suiter, had been shot by an unknown assailant whom Suiter had stopped in a vacant lot in the city’s Harlem Park neighborhood. In response, the department did something that had never been done before and is constitutionally suspect: it completely shut down several blocks in the community, which is virtually all Black, with a police cordon.

For six days, police restricted all vehicles and pedestrians from entering, barred all non-residents, and forced residents to show ID and get permission at the cordon to enter or leave. Press reports also indicate that some residents were told that they could not leave their homes, and were subjected to questioning, frisks, and searches at the cordon. The department’s sole stated rationale for this extreme action was the need to preserve a crime scene.

It’s true, of course, that police have a legitimate interest in securing crime scenes to preserve evidence and ensure that it can be properly introduced at trial. But it’s hard to understand how that rationale justifies the wide area and long duration of the cordon in Harlem Park, which extended well beyond the vacant lot where the shooting was reported to have occured, much less the other police actions, such as searches, interrogations, demands for ID, virtual “house arrest” of residents, and the barring of non-residents.  The lives of the neighborhood’s residents were turned upside down for days on end with questionable justification that made less and less sense as time wore on.

There’s good reason to think the Baltimore Police Department’s extraordinary lock-down in Harlem Park violated residents’ constitutional rights. A federal appeals court ordered a halt to a similar, less intrusive police cordon in Washington, D.C., deeming it unconstitutional. In 2008, the Metropolitan Police Department there created a “neighborhood safety zone” program in response to violence in Washington’s Trinidad neighborhood. Under the program, 11 vehicle checkpoints were erected over the course of five days at locations around the zone’s perimeter. Officers demanded identification and denied entry to any

drivers not found to have “legitimate” reasons for wanting to enter. However, pedestrians were allowed to pass at will.

In addition to the legal questions, and the striking disconnect between the police actions and the explanation given, the lockdown in Harlem Park raises more fundamental questions about the nature of policing in Baltimore. Many people noted that there was no similar response from the police in the hundreds of other killings in Baltimore this year. More fundamentally, the treatment  of every resident in Harlem Park as a suspect, without any plausible explanation, would simply not have happened in a neighborhood that was more affluent or not predominately Black. This is just one more powerful example of the way in which policing in Baltimore, and in America, is not conducted in a way that treats all people as having equal dignity and worth.

After speaking out against the lockdown, the ACLU of Maryland filed a public information request in mid-December seeking all body camera footage involving officers’ interactions with civilians while working the perimeter of the cordon.  This is our first request for a potentially large amount of body camera footage since Baltimore began deploying  the cameras to the police force in 2016.  We don’t know whether the officers were recording during all of their interactions with people at the cordon, but they should have under Baltimore Police Department policy.

This is precisely why there was such a significant demand for body cameras for police in the first place. They provide accountability and transparency in contested police actions as well as an independent record of what occurred so that the public is not forced to simply rely on the word of the police. We have also asked for footage of police escorting residents to or from the cordon, police directing residents to remain in their houses, and the first five minutes of any police searches of occupied dwellings within the cordon.

We hope that the footage, with identities redacted to preserve residents’ privacy and anonymity, will allow the entire Baltimore community to have a more informed basis on which to judge the police department’s actions.

David Rocah is a Senior Staff Attorney with ACLU of Maryland