At the last council meeting, the city placed a consent item on the agenda, which was an update on the city’s efforts to reduce homelessness.

Back in September, the city council approved its first Social Services Strategic Plan, which put homelessness at the top of its priorities and identified strategies based on best practices.

Staff notes that, nationally, most of the funding for such services to help homeless individuals and families originates from the federal or state government.  However, demand typically outweighs the amount of available funding.  As a result, the City of Davis and the County of Yolo have joined others in the pursuit of grant funding, as well as dedicated local funds, in order to provide services like housing and other support services for homeless individuals and families.

Staff writes, “Most believe that this study underestimates the number of sheltered and unsheltered people living in Davis.” 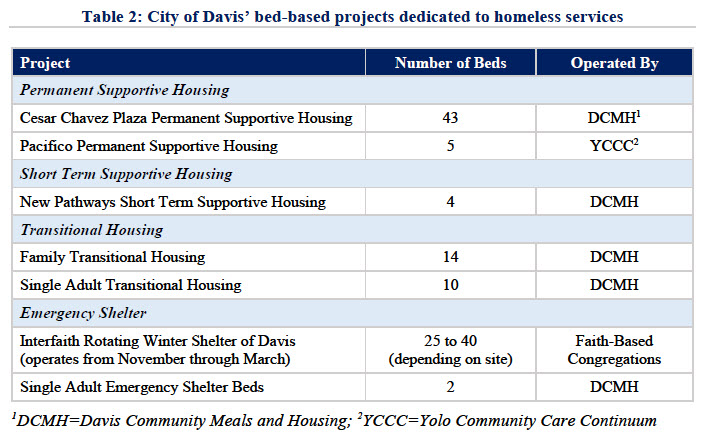 Above is the list of the city’s existing resources.  Staff reports, “Construction is also underway for the Creekside affordable housing project, which will add up to 44 beds of permanent supportive

housing to the City’s overall inventory.”

To support these efforts, staff reports that the city administers $51,208 in federal Community Development Block Grant funds and another $66,282 in Continuum of Care Grant funds.

In recent years, the city has taken an increasingly progressive approach to deal with the problem of homelessness.  Staff writes: “Following the model demonstrated in the successful Bridge to Housing pilot program in West Sacramento, Davis partnered with the County, Yolo Housing, and nonprofits to create its own response to move individuals off the streets to housing. This effort, New Pathways, took hold in the spring of 2016. To date, seven individuals have moved to permanent housing under this Housing First model and have successfully maintained their housing.”

The city last December received a $232 thousand grant from Sutter Health’s Getting to Zero initiative.  According to staff that allowed the city to add two components: the Pathways to Employment job training program and the Getting to Zero Voucher program for interim rental assistance and case management.

These three components are now entitled DavisPathways.  “The City is looking for additional property owners who are willing to partner with the City to rent to those in need,” staff continues.

The council also used the funds to hire a homeless outreach coordinator and initiate a pilot program to bring health and social services to the long-standing Interfaith Rotating Winter Shelter (IRWS) operated by faith congregations.

New Pathways—a short term supported housing program located at 512 Fifth Street in a city-owned two-bedroom, one-bathroom house. Operated under contract by Davis Community Meals and Housing since February 2016, this program is jointly funded by the City and the County. Yolo Housing is a partner and helps residents apply for subsidized housing. The house serves as an entry to permanent housing.

Pathways to Employment—a jobs training program to increase job skills for persons who are homeless and assist them to obtain employment. Operated under contract with Davis Community Meals and Housing, the program began in April 2017. Bill Habicht, former pastor at Davis Community Church, developed the program in collaboration with the faith based community, business community (Davis Downtown Business Association and the Chamber of Commerce), City, and County. The founding group now serves at the Pathways to Employment Advisory Committee.

Getting to Zero Vouchers: Rental Assistance and Case Management—an interim rental assistance program and case management program for adults in permanent housing. Operated under contract by Yolo Housing, this initiative provides Getting to Zero vouchers for those placed on Yolo Housing’s waiting list for subsidized housing. With the goal of moving individuals from the New Pathways house or directly from the street to housing, this program subsidizes rental costs until permanent funding through Yolo Housing is available. In addition, this program offers robust case management services to those who are willing. The Sutter Health Getting to Zero Initiative provides $162,000 to fund this pilot program.

The city created the homeless outreach services coordinator as the “only new staff position created this year.”  Ryan Collins was hired in August as the city recognized “the need for a full-time position dedicated to homeless services.”

The position exists within the Police Department, and the coordinator conducts outreach to “persons experiencing homelessness” and connects them to services. 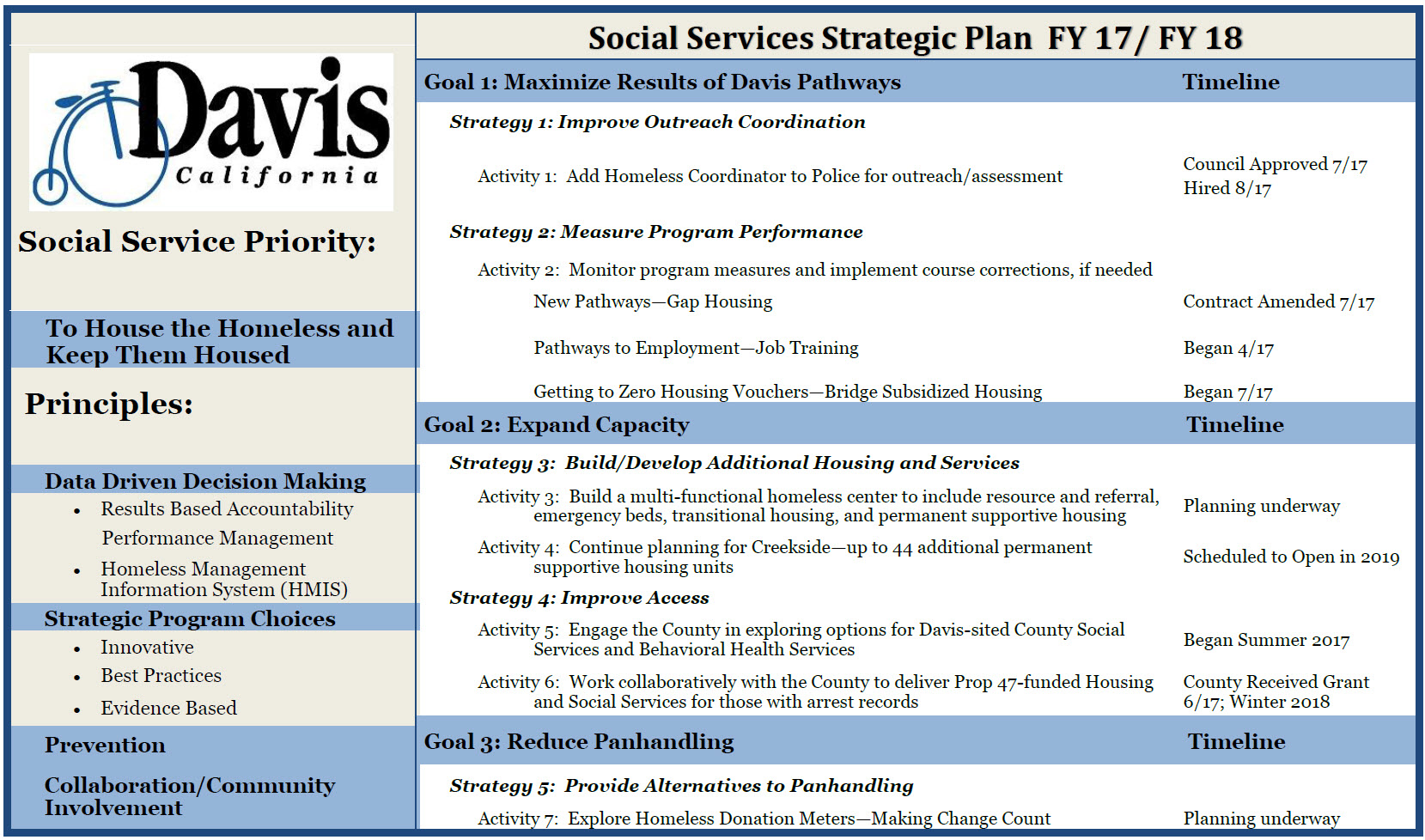 Share:
Tags:DavisPathwaysHomelessPathways to EmploymentSocial Services Plan
Previous : When the Baltimore Police Locked Down Several Blocks of a Black Neighborhood
Next : My View: The Bottom Line Is Davis Is Not Sustainable