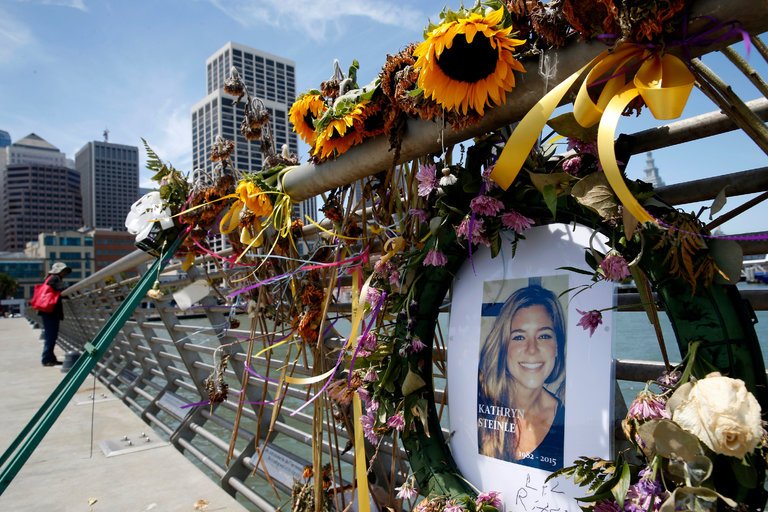 My View: Prosecution Overreached Trying to Get Murder Charge in Politically Charged Case

It was a politically charged case from the start, that pitted the politics of Trump and anti-immigration sentiment against the liberal policies of San Francisco and California, in shielding undocumented immigrants from federal law.

While the San Francisco Chronicle called this “a stunning acquittal on murder and manslaughter charges,” in the end the case ended up, as I expected, with an acquittal because the facts did not fit the charge of murder.

The defense’ contention all along was that this was an accident.  There was evidence presented by the defense that the shot ricocheted off the ground, bouncing up and piercing the heart of the unfortunate victim.  The defense would argue that the discharge was accidental, occurring after the defendant stumbled on the pier.

The jury did find 45-year-old Jose Ines Garcia Zarate guilty of a lesser charge of a felon in possession of a gun, for which he could be sentenced to 16 months to three years in state prison, but he has already served nearly two and a half years, meaning whatever the sentence is, he’ll be released.

The defense attorney argued that the case was overcharged, while US Attorney General Jeff Sessions was quick to blame the killing on San Francisco’s sanctuary city policy.

The prosecutors argued that Garcia Zarate brought the gun to the pier in order to do harm.  They argued that he aimed at Kate Steinle and pulled the trigger.  Assistant District Attorney Diana Garcia

attempted to make the case that the pistol involved in the shooting could not have fired without a firm pull of the trigger and argued that Mr. Zarate tossed the weapon into the bay and fled the scene.

Matt Gonzalez of the SF Public Defender’s Office argued that his client had never handled a gun.

There was also the four-hour long police interrogation of Mr. Zarate, without the benefit of counsel, in which he offered varying and often contradictory statements about his actions on the pier.

The Chronicle in covering the case noted, “At one point he said he had aimed at a ‘sea animal,’ and at another point, he said the gun had been under a rag that lay on the ground near the waterfront, and that it fired when he stepped on it.”

But, given the specific conditions of the interrogation, none of that is necessarily surprising or even indicative that Mr. Zarate was being deceptive.  Under pressure, subjects who are interrogated will often give contradictory accounts and at times even falsely incriminate themselves.

Mr. Gonzalez would argue that Mr. Zarate, with only a second-grade education and a limited understanding of English, did not fully understand the questions that the police asked him through an interpreter.

In the end, the prosecution simply could not establish beyond a reasonable doubt a case for murder.  A manslaughter conviction in this case would have made more sense, but I often believe that when the prosecution overreaches on the evidence it harms the entire case.

It came down to whether the jury believed that the gun was intentionally fired or accidentally went off.  The defense was better able to attack the interrogation at the police station.

Of course the specific facts of this case are nothing compared to the politics of sanctuary cities, where the opposition led by President Trump would argue that, but for the liberal policy in San Francisco and California, Mr. Zarate would not have been around to fire the trigger.

On the other hand, to ignite another debate you could argue that if it weren’t for lax gun laws, there would have been no stolen pistol for Mr. Zarate to have fired in the first place.

President Trump in a tweet called it, “A disgraceful verdict in the Kate Steinle case! No wonder the people of our Country are so angry with Illegal Immigration.”

“When jurisdictions choose to return criminal aliens to the streets rather than turning them over to federal immigration authorities, they put the public’s safety at risk,” Attorney General Jeff Sessions said in a statement.  “San Francisco’s decision to protect criminal aliens led to the preventable and heartbreaking death of Kate Steinle.”

On the other hand you could say the same thing about gun laws and the ability for these weapons to be available in the first place.  This isn’t about policy or even protecting the innocent, it is about politics.

“I am disappointed and angry at the not-guilty verdict for Jose Ines Garcia Zarate, an illegal alien who had several felony convictions & was deported from the US five times,” Senator Cruz tweeted. “Justice must be served for Kate Steinle.”

However, the San Francisco Public Defender fired back.

“The untimely death of Kate Steinle was a horrible tragedy. That tragedy was compounded when it was used as political fodder for then-candidate Donald Trump’s anti-immigration agenda,” San Francisco Public Defender Jeff Adachi said in a statement. “Despite the unfairly politicized atmosphere surrounding this case, jurors focused on the evidence, which was clear and convincing, and rendered a just verdict.”

Matt Gonzalez, who represented Mr. Zarate in the courtroom, in 2008 was the running mate of Ralph Nader who ran for President.

He said, “There are a number of people that have commented on this case in the last couple of years — the attorney general of the United States, the president and vice president of the United States — let me just remind them that they themselves are under investigation by a special prosecutor in Washington, D.C.

“They may themselves soon avail themselves of the presumption of innocence and beyond a reasonable doubt standard,” Mr. Gonzalez said.

For us the politics of sanctuary cities and immigration, while important, take a back seat to the right of due process.  My view is that some of the conservatives were convinced of Mr. Zarate’s guilt from the start, even if the facts really did not fit the crime of murder.

Was this a crime at all or just a very tragic accident that could have been prevented just as easily by better storage and care of a weapon?  The jury ruled for the defendant in this case, convinced of the latter.  Conservatives believe that, with better immigration laws, Ms. Steinle would be still alive.  I believe that, with better gun laws, the same could be said.

Let the politics play itself out now, because the jury ruled on the law and, in this country, the rule of law gets primacy.

14 thoughts on “Commentary: Jury Gets It Right in Acquitting Immigrant in the Killing of Steinle”