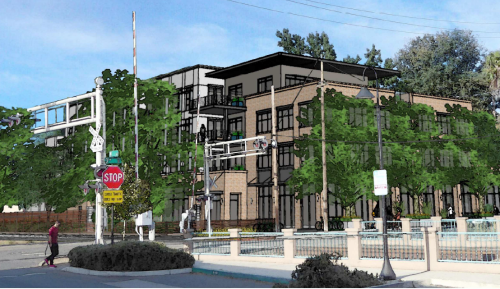 Since Michael Harrington filed a lawsuit in 2012 over the water rate hikes, we have seen a number of lawsuits against the city on projects including on Nishi, on a conditional use permit for the home next to Mr. Harrington’s, on three of the hotel projects, and now on Trackside.

While there have been settlement agreements on the water project, the Marriott Hotel, and the Hotel Conference Center, the courts have ruled against the plaintiffs whenever the matters have reached them.

Interestingly enough, Mr. Harrington in October lost at the trial court level on Nishi, and filed an appeal.  Last week, that appeal was dropped, so the Nishi verdict is now final.

Last night, the council met in a special closed session meeting, and voted 3-0 with two absences to defend the lawsuit.

My initial take on the Trackside lawsuit – and I will be happy to read any more thorough argumentation that the plaintiffs wish to provide – is that this is going to be a very tall task.

The first cause of action is based on the use of the Sustainable Communities Strategy that allowed the developer to avoid the full CEQA analysis and instead allowed for an Initial Study.  The petitioner is basically making a technical argument that the project was ineligible for it, based on the fact that the city has a lease of the Union Pacific Right of Way.

The petitioner, represented by Attorney Don Mooney argues: “The lease, however, is terminable for any reason on 30 day’s notice. Upon termination of the lease, which is not in control of the Respondents or applicant, the Project would no longer qualify for streamlining.”

Basically the plaintiffs in this case are making a very technical claim that, due to the fact that the project is on a railroad right of way and therefore could revert back to the railroad theoretically at some point in time, it is not eligible for the streamlined process outlined by the Sustainable Communities.

The purpose is that CEQA prioritizes “transit priority projects,” allowing them to streamline the environmental review process.

The plaintiffs argue that, because of the lease that can be terminated, there is “no guarantee that the lease will survive the life of the Project” and thus should not be considered as qualifying

for the streamlined environmental review.  They argue, “The City’s reliance on Sustainable Communities Environmental Assessment/Initial Study violates CEQA because the Project fails to conform to local land use plans and zoning ordinances.”

Unless there is very specific case law on this, I would be skeptical that a court would adopt such a standard.

However, I think the third and fourth causes of action are even more difficult to sustain.  Here they hit on the issue of the design guidelines.

The DDTRN (Davis Downtown and Traditional Residential Neighborhood) Design Guidelines for Mixed Use Building Mass and Scale display a schematic figure with the caption: “A building shall appear” to be in scale with traditional single-family houses along the street front.”

They write: “The approved building does not appear to be in scale with traditional single-family houses along the street front. Given the mandatory standards set forth in 40.13A.020, the Project is inconsistent with the DDTRN.”

As such, “Respondents’ approval of the Project constitutes a prejudicial abuse of discretion and is contrary to law.”

This has been the argument from the start and the city has maintained that the design guidelines are just that – guidelines.

As the city notes, the guidelines “describe desired outcomes” but they “do not require compliance with every single policy.”  They write, “Design guidelines are similar in that way, but provide more focused guidance. Inconsistency with a particular provision of a plan does not necessarily require a determination that the project will have a significant environmental impact.”

The city also notes: “The Design Guidelines must be considered as part of a project review, but do not establish mandatory requirements in contrast to Zoning standards which are mandatory. Design Review does not require one hundred percent compliance with the DDTRN Design Guidelines.”

So who is right?  Part of the problem that the plaintiffs have here is they are arguing that approval of the project amounts to an “abuse of discretion.”

We have discussed the abuse of discretion standard before, and it is an exceedingly high burden to meet.

In general, an abuse of discretion is defined as: “A failure to take into proper consideration the facts and law relating to a particular matter; an Arbitrary or unreasonable departure from precedent and settled judicial custom.”

The problem you have is that a city council has broad discretion, not only in approving projects but in setting the policies and changing the policies in the first place.

Is a court likely to rule that a council abused its discretion in approving a project that deviates from the design guidelines?  It seems very unlikely.

This is a very high barrier for the plaintiffs to breach.  It’s akin to getting an inside straight, because they would have to argue that the design guidelines have no ability to be changed by council action – and I just can’t possibly see it.

But I will be interested to see what case law exists that would push a court to take the other position.  For me though, anytime I see abuse of discretion alleged, I think you are going to have to show some blatant violations of the law, and here I think staff and others pretty well documented the law, with regard to the design guidelines as opposed to zoning rules.

Raising the last $700 – Towards a Sustainable Vanguard

Share:
Tags:Design GuidelinesLawsuitMichael HarringtonNishiTrackside
Previous : Commentary: Are Any of These Really Mega-Dorms?
Next : Steinberg and May Announced Joint Working Group to Expand UCD Presence into Sac