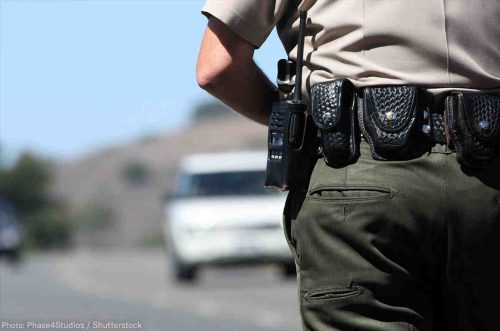 In a letter to the state’s police chiefs, the ACLU of Rhode Island warned against implementing traffic ticket quota policies.

Nobody likes getting pulled over by the police, but when even the police officers making the stops are doing it against their will, something is seriously wrong.

Welcome to the world of traffic ticket quotas.

Before Thanksgiving, amid news reports that some police departments in the state were requiring, or strongly recommending, that their officers issue a certain number of traffic tickets each time they were on patrol, the ACLU of Rhode Island warned departments that they faced legal action if they continued the practice. Rhode Island is one of a number of states that has a statute prohibiting law enforcement from implementing ticket quotas as well as arrest quotas.

Quotas are problematic for a number of reasons. For one thing, they send the message that policing is more about making money than public safety. Like police misuse of civil asset forfeiture laws, or infamous legendary Southern speed traps, ticket quota policies undermine the legitimate purpose of police work and generate public cynicism of law enforcement.

When police are put in the position of choosing which cars to pull over merely for the sake of meeting an arbitrary quota, policies like this can also encourage discriminatory treatment of motorists. Every day, virtually every one of us breaks a traffic law — whether it is going five miles over the speed limit, failing to put on a turn signal, or accidentally crossing the center lane for a moment.

If an officer has to pull over a certain number of people for minor violations, he or she will be able to pick and choose who the “lucky” and “unlucky” motorists are — and we know where that can

lead. Years of traffic stop data from Rhode Island documented a serious problem of racial profiling in many police departments: People of color are stopped more often and searched more often than whites, even though they are less likely to be found with contraband when searched. The national data reach similar conclusions. Arbitrarily imposed traffic stops can only promote further unequal treatment and undermine police-community relations.

Quotas send the message that policing is more about making money than public safety.

The anxiety and trauma that can be generated by a police stop goes without saying. For most people, it is an unnerving experience, and for people of color, it is particularly fraught. Minor encounters can quickly escalate if the driver fails to show enough “deference,” and suddenly a forced traffic stop over a minor violation or an “investigatory” stop turns into a completely avoidable arrest — or worse.

At bottom, there is no conceivable public safety basis for a quota system. If police chiefs are concerned that their officers are being lazy on the job, they need to find a real means of motivating them. Implementing ticket quotas cannot possibly accomplish this, and regardless, professionalism and commendation in policing should not revolve around the number of traffic tickets issued.

The ACLU of Rhode Island successfully pushed for passage of the state’s ban on traffic ticket quotas in 2010 after the disclosure of documents about one police department’s practice, enacted because some town officials felt not enough tickets were being issued. Legislators and the public rightly condemned the practice then. It is unfortunate to learn that seven years later, not all police departments have yet gotten the message. In short, the implementation of traffic ticket quotas is extremely problematic as a matter of policy, but even more so when it involves a police department itself violating the law.

To be clear, enforcement of traffic laws can serve an important function in protecting the motoring public, but quota policies mock that function. That is why our letter to chiefs made clear that we stand ready to take action against any police department ignoring its obligations under this law.