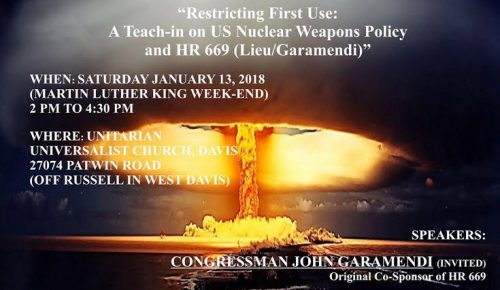 A Congressional Proposal To Restrict First Use Of Nuclear Weapons

By Stephen Souza and Bill Julian

On December 10, 2017 the Nobel Peace Prize was awarded to the International Campaign to Abolish Nuclear Weapons (ICAN), “for its work to draw attention to the catastrophic humanitarian consequences of any use of nuclear weapons and for its ground-breaking efforts to achieve a treaty-based prohibition of such weapons.”  ICAN’s work has included The Humanitarian Pledge and the UN Treaty on the Prohibition of Nuclear Weapons, adopted by 122 member nations of the UN on July 7, 2017, although significantly not by the US or the other nuclear weapons states as of yet.

In making the award to ICAN the Nobel Committee recognizes that “We live in a world where the risk of nuclear weapons being used is greater than it has been for a long time.”  Recent events bear this out.  The US President and North Korea have traded harsh rhetoric as North Korea engages in risky testing programs intended to create a new nuclear weapons capability.  The US has undertaken a $1.4 trillion nuclear modernization program that dwarfs all other global nuclear weapons spending combined, at the same time that it proposes to add that sum to the national debt.

The urgency of addressing the nuclear weapons issue has become clear to all of us.  We need to take concrete steps to reduce the danger that nuclear weapons will be used, and to reduce and ultimately eliminate nuclear weapons arsenals.  ICAN’s receipt of the Nobel is an important recognition by the international community of this necessity.   The US is the world’s leading nuclear power, is the only nation that has used nuclear weapons without warning, and thus has a special responsibility to lead.

The journey toward a world free of nuclear weapons starts with a first step and the US can take that step by acting on a legislative proposal now pending in the Congress.  HR 669, sponsored by Congressman Ted Lieu and our own Congressman John Garamendi restricts the first use of nuclear weapons by requiring a Congressional Declaration of War and a specific authorization to use nuclear weapons.  It does not restrict nuclear retaliation by the President.  It currently has 73 co-sponsors in the US House, including 19 California Democrats; there are 13 co-sponsors to the companion measure in the US Senate including Senator Feinstein.  The current Congressional leadership will not take up this measure, although the Senate did conduct the first hearing in over 40 years on US nuclear weapons policy last month.

HR 669 recognizes that nuclear weapons are unique in their ability to kill combatants and civilians indiscriminately on gargantuan scale; and unique in their long-term damage to survivors and to

the environment.  Because of their unique long-term and widespread effects their use is itself an act of war, not a choice of one or the other military weapon.  Under the US Constitution it is the Congress that declares war and provides for the common defense.  The President is commander-in-chief of the armed forces.  The historical circumstance that the atom bomb was secretly developed and used initially during a declared war has led to the current approach that the President may unilaterally make the decision to use nuclear weapons under his control.  The US has not formally disclaimed a policy of using nuclear weapons first in a conflict, whether or not war has been declared.  We have been witnessing the results of that decision-making ambiguity recently:  wide-spread speculation that the President may issue the ultimate, supremely dangerous order to use and be countermanded, or not, by military personnel operating on their subjective, non-public notions of whether or not that order is legal.

By clarifying that Congress must both declare war and specifically authorize the first use of nuclear weapons, HR 669 re-establishes the constitutional balance in war-making decisions and provides an open and transparent public forum for debating and deciding on first use.  HR 669 does not ban nuclear weapons.  It does not affect the ability of the US President to use nuclear weapons to retaliate against another’s use of nuclear weapons against the US or its allies.  What it does do is to create time for other approaches to conflict resolution, both diplomatic/non-military and conventional military.  It is an important first step.

For us this has been a life-long concern.  When Stephen first came to Davis in the early 1980’s, he joined with other activists to persuade the Davis City Council to adopt a Resolution Declaring Davis to be a “Nuclear Free Zone,” finding that “the escalating proliferation of nuclear weapons is a grave threat to the health and safety of the citizens of this community, to the survival of the human species, and to the continuation of life on this planet, … if the people lead, in time the leaders will surely follow….”

The Davis Democratic Club is trying to do its part now by co-hosting a teach-in for the community on HR 669 and nuclear weapons on Martin Luther King weekend.  The event will be January 13, 2018 at the Unitarian Universalist Church on Patwin Road, starting at 2 pm.  We are bringing in experts on nuclear weapons policy and status; on the constitutional dimensions of removing the President’s sole unilateral authority to make the nuclear weapons use decision; and on the political and budgetary dimensions of the US nuclear weapons program.  We will be publishing background and contextual material on our website.  Congressman Garamendi has been a leader on this issue and we are happy to follow his lead.

The Congressional initiative, the UN Treaty banning nuclear weapons, the award of the Nobel to ICAN, the recent statements of Pope Francis condemning both the threat of use of nuclear weapons “… as well as their very possession…” gives us confidence that we can make this journey in very good company.  Join us on January 13 and on the road to a future without nuclear arms. 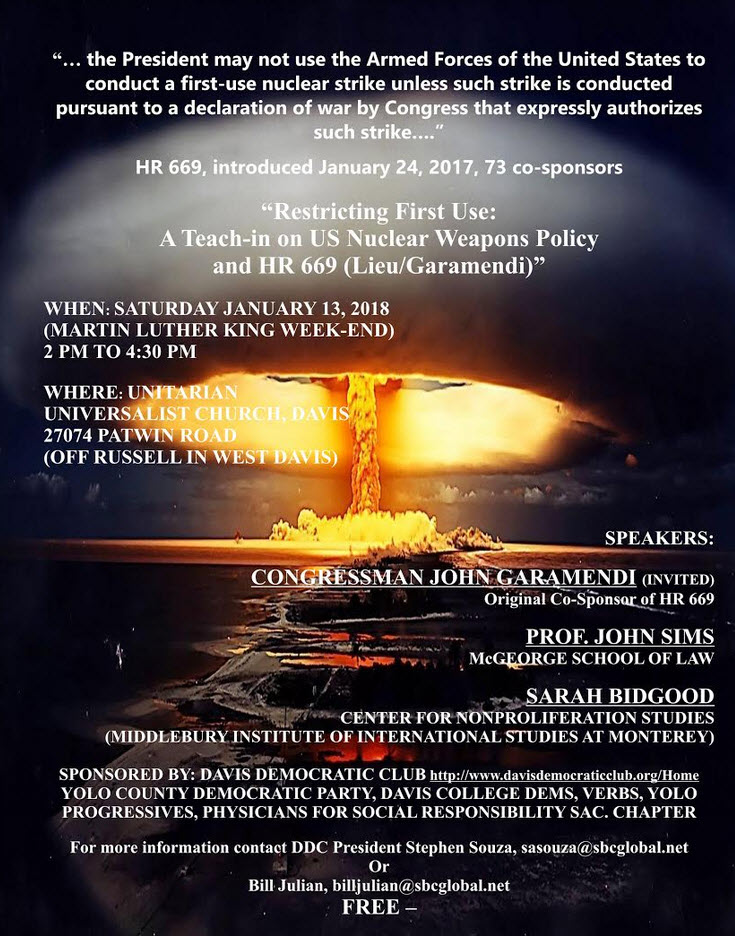