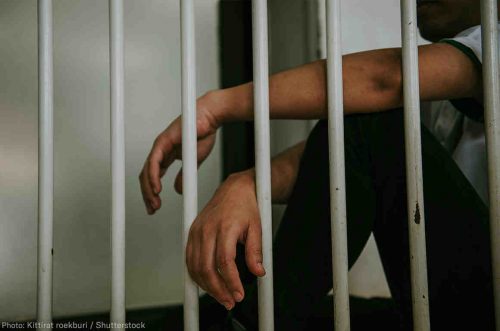 Yesterday’s article that we re-published from the ACLU asks: “Does the Constitution allow a teenager to be sentenced to die in prison for a pair of armed robberies committed on a single day, in which no one was seriously injured?”

It was an issue that could have arisen here in Yolo County.  In fact, it has come up here in Yolo County, but the issue is broader.  Yes, being a teenager is an added element, but we have seen a number of effective LWOP cases involving young people under the age of 25 who are facing 50, 75 and even 100 years in cases where no one was injured.

The case that the ACLU is taking up goes back to 1995 and Bobby Bostic who was 16 and with an 18-year-old committed a pair of armed robberies.  They in fact shot at two people but did not injure them.  The prosecutors charged them with 18 counts and the jury convicted them on all 18.

The callous indifference of the system was clear with the trial judge.

Given what we now know about juvenile brain development, I have a problem with the attitude of the judge.  The boy made a choice, it was a very bad choice, but at 16 years of age, is he really capable

of making decisions that will sentence him to die in prison?  And should a judge be that cavalier about it, even if he is deserving?

There are of course in life choices that will impact you for the rest of your life – if you do kill someone, that certainly changes the calculation.  And, of course, a bad choice can cause you to end up being killed yourself.

But short of that, you would think that we could develop a system that treats such crimes with the severity that they need to be treated, without consigning a 16-year-old to die in prison.

In 2010, in Graham v. Florida, the Supreme Court held that the Constitution’s Eighth Amendment “prohibits the imposition of a life without parole sentence on a juvenile offender who did not commit homicide.”

While the decision does not guarantee that a child who does not commit homicide will eventually be released, it requires that the state provide a “meaningful opportunity to obtain release based on demonstrated maturity and rehabilitation.”

In this case they are trying to use a loophole arguing that the decision only applies when a state uses the words, “life without parole,” rather than the more common treatment of simply creating a parole eligibility date at a point when the individual is not likely to be alive.

Mr. Bostic would be 112 when he becomes eligible for parole.  It seems very unlikely that he would live to that age (though not completely out of the question).

The Vanguard has spent a lot of time on wrongfully convicted cases, but we have also focused our attention on what we would call overcharged cases.

In the recent Yolo County case where Ricky Hernandez and Josh Cadenaz-Lopez face 85 and 100 years, each might be both wrongly convicted, at least on the part of Mr. Cadenaz-Lopez, and overly harsh in terms of the potential length of punishment.  The sentencing hearing has been pushed back until January as the attorneys submit motions for a new trial, but, given the charges, there might not be a lot of leeway for a more reasonable sentence.

There is no doubt that an armed robbery is extremely dangerous – holding someone at gunpoint is not only dangerous but also traumatizing to the individual.  But when no one is hurt, we should be able to have more leeway for lessons and second chances than in cases where people are seriously injured or killed.

To me, while the fact that the ACLU case involved a juvenile is meaningful, the broader issue extends to most non-fatality effective-LWOP cases.  What ends up happening is that these are really cases that should have about a 15- to 20-year sentence – long enough to serve as a deterrent, long enough for the individual to grow up and learn from their mistakes, but not so long as to give them no hope that they can ever live a meaningful life.

Remember, these are not people who took another life – they should be considered redeemable in most cases, or at the very least allow a board to make a determination in the future.

A year ago, we asked the question: Can We Be Safe without Overcharging Cases?  At that time, we talked to a mother whose son received 35 years to life, where her son and others were convicted of attempted murder after they fired on what turned out to be an uninhabited dwelling in Woodland.

By the time the DA added gang and gun enhancements, her son received the life sentence where he won’t even be eligible for parole until he’s served 85 percent of the time, and then only if a parole board – notoriously stingy, especially with gang cases – approves his release.

She acknowledges that what he did was extremely dangerous, not to mention stupid.  She agrees he needed to be punished for what he did.

Critics of sentencing in the United States have pointed out that our sentencing schemes are counterproductive and not cost effective.

We end up sentencing people more as they get older and commit additional crimes. There is a logic to that – we tend to go easier on people who have been convicted of fewer crimes, assuming that those who repeatedly commit crimes are more likely to continue to do so.

However, research shows that criminal activity actually peaks relatively early in life and, as individuals age, they commit fewer crimes and the crimes they commit tend to be less violent. The truly dangerous and unrepentant career criminals are relatively rare.

Not only are older people much less likely to commit further crimes, the cost to incarcerate them goes up as they require more health care.

Mark Mauer, director of the Sentencing Project, has advocated for a 20-year cap that gives judges or parole boards the opportunity to add more time if necessary.

As a recent article in the New York Times points out, “Research by American social scientists shows that all but the most exceptional criminals, even violent ones, mature out of lawbreaking before middle age, meaning that long sentences do little to prevent crime.”

“For most of the crimes the F.B.I. tracks, more than half of all offenders will be arrested by the time they are 30,” journalist Dana Goldstein reports.

Criminal careers also do not last long, as research by “criminologist Alfred Blumstein of Carnegie Mellon and colleagues has found that for the eight serious crimes closely tracked by the F.B.I. — murder, rape, robbery, aggravated assault, burglary, larceny-theft, arson and car theft — five to 10 years is the typical duration that adults commit these crimes, as measured by arrests.

All of this ties into improving research on brain development that “suggests that the parts of the brain that govern risk and reward are not fully developed until age 25, after which lawbreaking drops off.”

What we need is to align sentencing policies with the latest research on criminality and incarceration.  Allowing a parole board or other board to assess actual risk rather than to set a minimum sentence years in advance seems much more logical than the current system.

We see in Yolo County, time and time again, disproportionately long sentences for crimes that do not result in death or even, in many cases, great bodily injury.  So we end up putting young kids away for life or lengthy periods of times for stupid and dangerous things that they did while in their youth, and that seems not to serve the ultimate interest and goals of justice.

Share:
Tags:ACLUCadenaz-LopezGang CasesLife Without ParoleOverchargingRobbery
Previous : When Police Shoot a Man Who Was Stabbing Himself
Next : My View: Davis Could Put Itself on the Cutting Edge with Social Services Tax

One thought on “My View: The Need to Re-Think Life without Parole”