One of the biggest criticisms of the Cannery Project is that it built primarily relatively low density single family housing that ended up on the more expensive side and, in order to fill the units, The New Homes Company has had to reach out to the Bay Area to draw residents.

In other words, the project is not meeting the internally generated needs so much as filling its housing by attracting new residents.

West Davis Active Adult Center developer David Taormino told the Vanguard this week that he believes his project will help with the Davis housing crisis by allowing seniors to move from existing homes in Davis and to downsize into the senior community.

But he is also fully aware that if the senior community simply attracts seniors from outside of the area, they are not filling internally generated needs.

Mr. Taormino points out that the language of Measure R itself contains critical language: “The purpose of this article is to establish a mechanism for direct citizen participation in land use decisions

affecting city policies for compact urban form, agricultural land preservation and an adequate housing supply to meet internal city needs, by providing the people of the City of Davis the right to vote…”

For him the key language is “to meet internal city needs” and, in order to that, it means we need to provide housing for what would be considered internally generated needs: students, families looking to move up to own their own homes, and those who work here – and not for people in the Bay Area looking for more affordable forms of housing.

“The West Davis Active Adult Community is taking a progressive approach to bring new housing to the City of Davis,” new literature on the project claims. “In direct alignment with Measure R, our newly built homes will help provide ‘an adequate supply of housing to meet the internal needs of the City of Davis’ (partial Measure R wording) by focusing solely on Davis based buyers.”

How do they plan to do that?

They want to create qualifying classifications for the 80 percent of the homes that are age restricted, where buyers would have to meet one of six criteria: be a current Davis resident; have immediate family that currently resides in Davis; be a current or retired employee of UC Davis, City of Davis, Davis Joint Unified School District, or a Davis-based business; be a graduate of UC Davis or DJUSD; and about 10 percent of buyers could be unrelated to Davis.

There would be similar residency requirements for the 20 percent of the homes which are not age restricted. 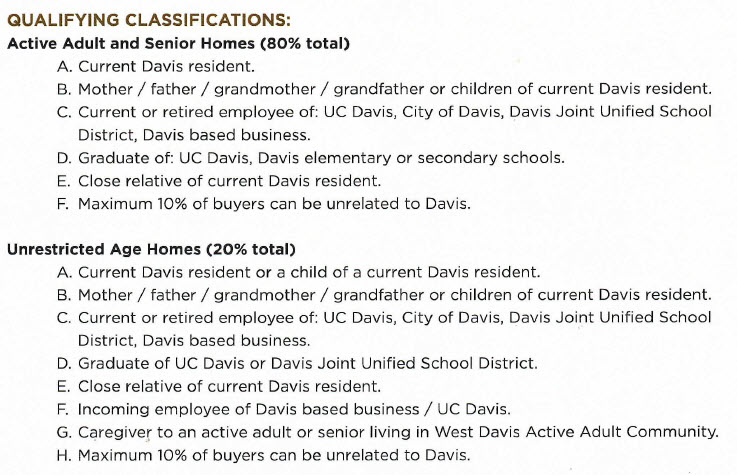 David Taormino told the Vanguard that they have legal counsel checking the legality of the arrangement but his understanding is that such qualification guidelines are allowable.

The city attorney has yet to vet this part of the project proposal.  City Manager Mike Webb did not want to hazard a guess, stating, “I don’t have the experience with such qualifications criteria and this specific area of housing law to opine.”  He did state, “Staff will seek input from legal counsel of course.”

The developers of this project continue to try to move outside of the box in hopes of being able to pass a Measure R project.

Last month before the Social Services Commission, the commission heard the proposal for the affordable housing plan for the proposed West Davis Active Adult Community project, which includes 332 for-sale units along with 150 affordable senior apartments on a 75-acre parcel north of Covell Boulevard and west of Sutter Davis Hospital.

David Thompson of Neighborhood Partners is heading up the affordable portions of the project which, as developer Dave Taormino points out, is creating 2.5 times more senior housing than required for the ordinance.

The affordable units are anticipated to be age-restricted, for residents 62 and over.

David Thompson said at the meeting that the 150 units would be built in two phases and styled after the existing project, Eleanor Roosevelt Circle.

Staff calculates the affordable housing obligation for West Davis Active Adult Community as 64 units, based upon inclusionary percentages in the Affordable Housing Ordinance. However, they suggest, “The exact requirement is likely to shift slightly as the project is revised through the public review and tentative mapping processes.”

Thus the 150 affordable units greatly exceeds all obligations under the ordinance. Staff notes, “Although the site is not proposed to be deeded to the City, it does meet the requirements for a land dedication parcel: minimum of two acres, of sufficient size to meet the required number of affordable units, and without abnormalities in shape and terrain.”

The unit yield for a standard land dedication assumes a density of 15 units per acre. Staff writes, “Even at this relatively low density, the site would receive credit for 64 units and meet the obligations for WDAAC.”

Right now the project is scheduled to go to the voters in November 2018.  Nishi presumably would go on the ballot in June 2018.