The biggest issue facing Davis, as we approach the 2018 elections – which will feature among other things ten council candidates, a possible land use project, and two city revenue measures – is the issue of student housing.

According to the fall survey, 13 apartments, or 0.2 percent, of 8,122 leased by unit were vacant, the same percentage as last year.

UC Davis uses these surveys “to assess the current housing market conditions faced by UC Davis students and faculty and determine the feasibility of proposed housing projects. Similar surveys have been conducted on an annual, or biennial basis, since at least 1975, documenting long-term historical trends.

“Since 2013, the survey has been administered in partnership with BAE Urban Economics, a private real estate consulting firm with offices in downtown Davis.”

UC Davis has already announced that, in addition to the 6200 beds they had previously promised to provide over the next ten years on campus, they will expand that to 8500.

As Chancellor Gary May acknowledged in a statement a few weeks ago when the changes were announced: “Housing market changes cannot be resolved by UC Davis alone. We want to continue to work cooperatively with the Davis community, City Council and other local communities to encourage smart and responsible development drawing on the careful and innovative history of planning in the city of Davis.”

These represent the final numbers before the council votes on whether to approve projects like Lincoln40 and Plaza 2555, as well as Nishi as soon as two weeks from now.

The city has identified five percent as a goal for the vacancy rate, and these numbers suggest we have a long way to go.

The survey notes that the market is shifting as more apartment complexes (even existing ones) are moving toward bed leases versus unit leases.

The report notes: “One of the more complex dynamics of the local rental housing market is the practice of renting out individual apartment units to multiple tenants using multiple lease agreements. Under this type of arrangement, known as a ‘bed lease,’ each bed or bedroom in an apartment is associated with a separate lease agreement.”

Still, 87 percent of the units are rented under unit lease arrangements.

The unit leases have a low vacancy rate.  They found “a vacancy rate of 0.2 percent, which is roughly comparable to the vacancy rate documented through both the 2016 and 2015 surveys.”

The report does not delve into this, but this is suggestive that the market is moving toward the direction of bed leases anyway, and that the type of leases are fluid even absent new development. 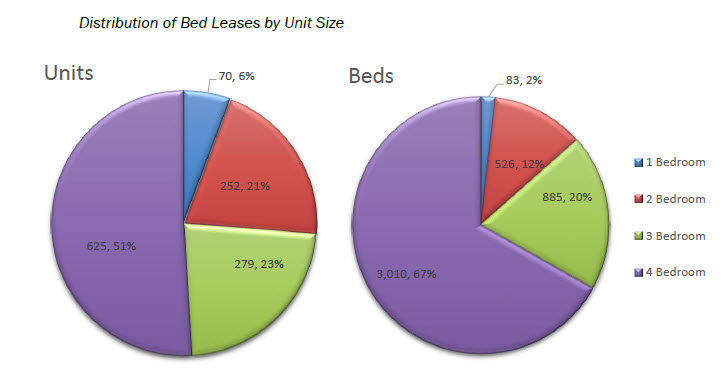 Also, “Four-bedroom bed-leased apartments have a higher prevalence of ‘double-ups,’ with an average of 4.8 beds per unit.” 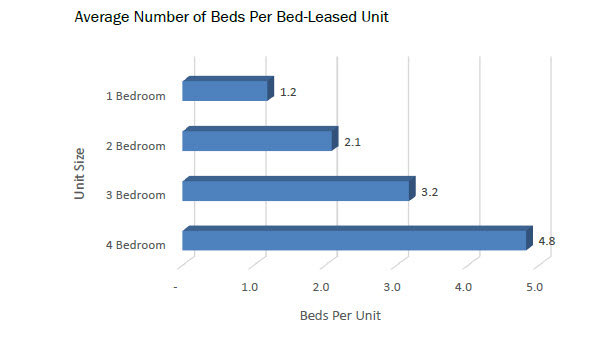 Bed-leased spaces are more likely to be vacant, however, than unit-leased, although that would seem to make sense if you are talking about a vacant or available bed versus a full unit.

Still, the vacancy rate even for bed leases spaces is absurdly low.  There were a reported 74 bed-leased spaces available in 2017, for a vacancy rate of 1.6 percent.  “This represents a modest increase from 32 vacant beds in 2016, when the vacancy rate was 1.0 percent. Vacancies were spread among all unit sizes, with the majority (i.e., 50 units) concentrated in units with four-bedrooms.”

That leads them to the blended vacancy rate: “To estimate a citywide vacancy rate for all lease types, BAE combined the unit lease and bed lease vacancy rates, to generate a combined or ‘blended’ vacancy estimate.”

In other words, the conditions are slightly better than in 2016, but worse than 2015.  Perhaps some of that simply reflects the higher percentage of bed leases in 2017 than 2016.

The vacancy rate is of course half the equation.  The other part is the rental rate.  They found: “All survey respondents reported static or increasing rents, relative to 2016. None of the respondent complexes reported lowering rents in 2017 in order to fill vacancies.” 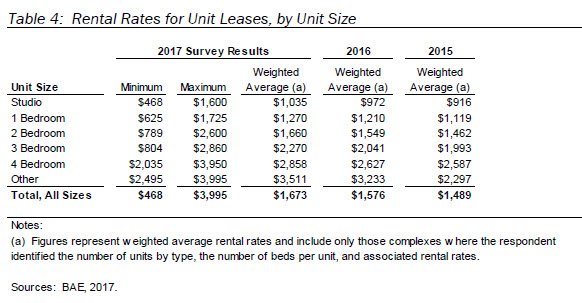 In bed leases, the per bed charge seems to average just under $900 for a bed.

Until there is an increase in supply, the market is not going to improve.  There is not enough data about the bed leases versus unit leases, but the data we have suggest that it might be that bed leases will allow for a higher vacancy rate and the leases allow for a slower rise in rental rate.

The city of Davis has already approved Sterling Apartments.  Construction is underway.  The campus is planning for Orchard Park, which now includes 1400 additional students, and further expansion of West Village to include 3800 students which could be online by 2020 if things go smoothly.

The city is planning potential additional units at Lincoln40, Plaza 2555 and Nishi, which could along with university commitments push the total new housing to 13,000 or so new beds.  That has the real ability to change the market.

However, that will take voter approval of the 2200 beds at Nishi, along with council approval at Lincoln40 and Plaza 2555, to make it happen.

Share:
Tags:BAEBed LeasesGary MayLincoln40LRDPNishiSterlingStudent HousingUC DavisVacancy Rate
Previous : Commentary: Did the DA Commit Prosecutorial Misconduct in Justin Gonzalez Trial?
Next : Nishi Project Will Move to Council in Two Weeks to Determine if It Will Be Placed on the Ballot