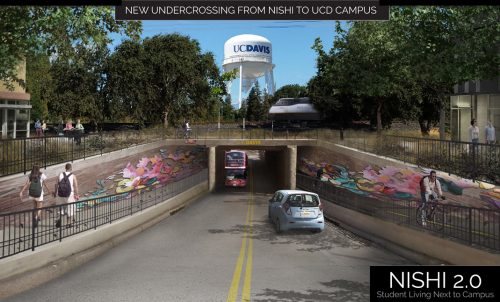 Roberta Millstein wrote a letter to the local paper complaining that the “commission process favors developers.”

She writes: “Our commission process is broken, as was very evident at the Davis Planning Commission meeting on Jan. 24.

“One of the topics of discussion was Nishi 2.0, the new proposal for student-oriented housing on the triangle of land sandwiched between the freeway and the train tracks. The developers were allowed to speak for well over an hour — to basically take as much time as they liked. They even brought in citizens who also were allowed to talk as long as they liked on the developers’ behalf.”

She notes: “Other citizens, however, were given only two minutes each to reply. Then the commissioners gave a very brief discussion — with some commissioners giving no comments at all — before their unanimous vote in favor of the project at about 11:30 p.m. Many citizen concerns brought up during the comment period were not even mentioned.

“This is not a democratic process. This is a process that heavily favors developers,” she argues.  “There needs to be a limit on the amount of time developers are allowed to present,

just as there is for other citizens.”

While I think she has a point about some things here, I disagree with her bottom line and I’ll explain why shortly.

First of all, I was thinking a similar thing as the night grew late last week.  The schedule for hearing the Nishi matter was cut very tight, where it literally went to the Planning Commission last week and was going to be heard by the council in two weeks – there was no margin for error, no time for a second reading.

In 2016, the Planning Commission spent three meetings on the Hyatt House project – but now they spend just a few hours on a much larger project in Nishi?  That did seem rushed.  And, given that the project wasn’t even finalized, it seems they could have met earlier and come back with a second hearing.

With that said, I disagree with Ms. Millstein on the thrust of her points.

First of all, the Planning Commission is really not the decision-making body here.  The first motion was to “recommend that the City Council determine that the Addendum to the previously-certified EIR adequately assesses the impacts of the revised projects and there are no changed circumstances or new information requiring recirculation.”

They then recommended that the council approve the General Plan Amendment and Development Agreement.

These are narrow considerations, especially since city staff determined that the impact of air quality was outside the purview of CEQA.  If that is the case then the fight at this point is really over whether there should be a project and that is the job of the council, not the Planning Commission.

What has made the process developer friendly is that the council, the actual decision-making body, has approved each of these projects by either 5-0 or 4-1 votes over the last few years.

Third, Davis is actually one of the most democratic communities around.  For all of the complaining about the process being not democratic, here we had the commission meeting going until 11:30 pm, whereas in neighboring communities that would never happen.  In Woodland they typically finish their council meetings before 9 pm.

What was pointed out to me is that the city bends over backwards in order to give the community space for deliberation in commission meetings, even as the comments extend well beyond the scope of the commission’s purview.

Finally, it is worth noting that while I agree Nishi was “rushed” through the Planning Commission process, it is also not a completely new project.  Yes, the specifics of this project have changed from the one that the voters rejected in 2016, but the issues are largely similar.

We are already very familiar with a lot of the issues, including the most contentious one at this time, air quality.  The project has addressed concerns about traffic impact and has mitigated concerns about affordable housing options.

The issues brought up last week will come back next week before the elected city council and they will make the decision as to whether to put the project on the ballot.  And, even if the council votes to do so, the voters get the final say.

Share:
Tags:CEQAEIRMeasure RNishiPlanning COmmission
Previous : My First Night on Death Row as an Innocent Man
Next : Commentary: Is Air Quality the Only Issue the Opposition Has on Nishi?

10 thoughts on “Commentary: Responding to Letter Writer’s Concerns about Commission Process and Nishi”