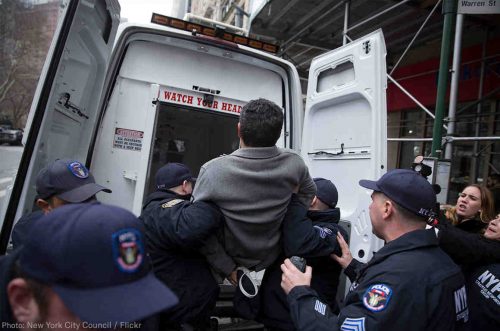 Across the country, a growing number of immigrants’ rights advocates and outspoken members of the immigrant community are ending up in immigration detention, facing deportation, or being threatened with criminal charges.

In New York, Jean Montrevil and Ravi Ragbir — both prominent immigrants’ rights activists and leaders of the New Sanctuary Coalition of New York City — were arrested within a week of each other. In an opinion ordering Mr. Ragbir’s release from detention, the judge expressed “grave concerns” that Mr. Ragbir was “targeted as a result of his speech and political advocacy on behalf of immigrants’ rights and social justice.”

In Arizona, No More Deaths, a humanitarian organization whose purpose is to prevent deaths of migrants crossing the desert, recently released a report accusing Border Patrol agents of putting the lives of migrants at risk due to recorded incidents of them sabotaging water containers and other supplies. A week later, eight members of the organization were charged with federal crimes for leaving water, food, and
blankets for migrants along desert trails.

Similar incidents have been reported in other states, including Washington state, Colorado, Massachusetts, New Jersey, and Montana. The Department of Homeland Security has denied that these incidents are retaliatory. But it is hard to ignore the disturbing pattern: DHS is increasingly targeting activists who publicly oppose or resist the Trump administration’s anti-immigrant agenda.

In a robust democracy, the ability to express support or disapproval of the government and its leaders is essential. Under the First Amendment, the right to free speech applies to all, regardless of

immigration status. However, as the New York Civil Liberties Union and the ACLU argued in a brief advocating for Mr. Ragbir’s release, when immigration activists begin facing harsh penalties in increasing numbers, it sends a clear signal to the rest of an already targeted immigrant community: Keep quiet, or you’ll be next.

These incidents are part of a broader trend by the Trump administration to target anyone that doesn’t agree with its policies. From the president’s attacks on the free press and the judiciary to mass arrests of inauguration protesters, this administration has made plain its contempt for the First Amendment.

Immigrants and their allies are not the only people who have been subject to charges from the U.S. government after expressing dissent for the Trump administration. But with Trump’s mass deportation agenda in full swing, immigrant communities are particularly vulnerable. Arrests targeting immigrants’ rights activists have increased at a time when ramped-up enforcement efforts have already had a chilling effect within immigrant communities. Over the past year, many immigrants have decided to steer clear of courthouses, hospitals, and other public spaces for fear of arrest and deportation

Despite claims from DHS that they are acting in the interest of public safety, enforcement tactics that deter immigrants’ full participation in society put us all at risk. By stoking fear in immigrant communities, DHS’ actions not only erode public trust — they also serve to silence and isolate immigrants and their families.

Moreover, by their very nature, silence and isolation allow problems to fester and grow. For example, when victims and witnesses are afraid to report crimes for fear of arrest and deportation, perpetrators get a free pass. When people are afraid to seek medical treatment or evacuate in an emergency, health and safety suffers. When immigrant leaders are scared to bring attention to government misconduct, those actions go unchecked. And when advocates are fearful to provide aid to people in need, lives are put at risk.

It is easy to see why the right to free speech is espoused in the First Amendment. Without the right to critique and hold our government accountable, our other constitutional rights can be easily trampled upon. That is why the stifling of advocate voices is so dangerous, especially in a community that is already under attack. Targeting immigrant leaders endangers the rights of those directly impacted, but it also threatens to chill the free speech of other would-be activists, who may remain quiet lest they, too, become targets for arrest.

Katie Egan is from the ACLU Washington Legislative Office

Share:
Tags:ACLUFree SpeechImmigrationProtests
Previous : Preliminary Hearing for Woman Charged with Theft
Next : Why You Shouldn’t Burn Wood This Winter