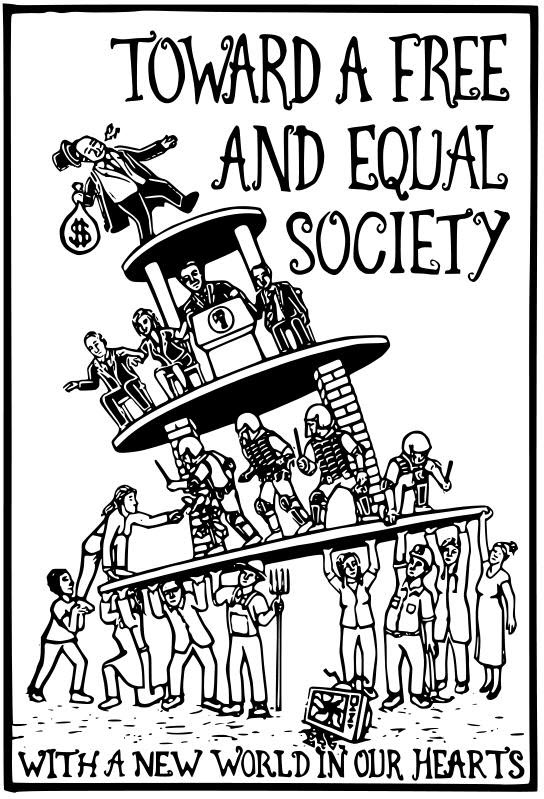 Much has and will continue to be written about different economic models in both serious and not-so-serious (but still accurate and informative) ways.  It should be noted that most (though not all) mainstream economics courses, analyses, etc. start from a capitalist framework without even acknowledging the possibility of alternative structures.  But this piece isn’t about that.  This piece is about an analogy, an analogy between economic systems and political ones.

In the U.S. it’s often believed that political democracy (which the U.S. is thought to have despite some questionable assumptions, but that’s a different story), individual liberty, and capitalism are the pinnacles of freedom.  However, this conflates several distinct things.  Political democracy exists when the people collectively decide how to run certain aspects of society.  This is in contrast to such systems as political monarchy, dictatorship, and oligarchy where one or a few unelected and unaccountable individuals make these decisions.  The problem here is that the types of things that fall under modern conceptions of political democracy (since really everything is political) are limited to a small subset of what’s necessary for society to function.  In particular, one major category of decisions that’s largely excluded from democratic control by the people is the way resources are distributed and the priorities placed on their use.

For instance, one recurring theme in Davis city politics centers around the merits of various project proposals from hotels to innovation centers to apartment buildings and whether or not the city should approve their construction.  However, regardless of your position on any of these (or the larger questions that often surround them) it’s important to realize that all of the city council and even commission meetings where approvals are sought occur toward the end of the process when it comes to proposals put forth by private developers (as is the case with most of them since the city doesn’t typically have the funding to build these things and even if it did it would probably still have to go through private construction companies).  Prior to this, developers have already made major decisions about such things as the general layout and design of the project in addition to making the fundamental decision of whether or not to bring forward a proposal to begin with.  And even when city input is requested or required the ultimate decision about whether and how to proceed still lies with the developer.

In other words, capitalism is economic oligarchy where a few unelected and unaccountable individuals decide how to run most economic aspects of society.  Now some may say that it’s not individuals

making these decisions, it’s the market, and to some degree that’s true.  In order for a business, especially a small business, to survive under capitalism it’s sometimes necessary to engage in behaviors which aren’t desired by any of those running it.  However, this was (and is) likely true of authoritarian political systems as well (monarchs don’t rule in a vacuum and external factors need to be accounted for) but this isn’t a reason to support, uphold, or encourage such things.  Furthermore, not only do situations exist where those in charge of political or economic decisions make choices that are clearly unnecessary and made purely for personal gain at the expense of others, but even when market forces dictate the direction that a business takes the people still aren’t collectively doing so and thus, it’s still not democratic (the notion of voting with one’s dollars has a lot of problems).  This is where socialism comes in.  There are a lot of possibilities (and debates) when it comes to the details of socialist economic policies and structures but the unifying theme and basic premise behind all of them is economic democracy where the people collectively decide how resources will be used (not to be confused with heavily regulated but still privatized industry combined with welfare capitalism which is sometimes referred to as socialism).

At this point some may try to argue that socialism infringes upon our individual liberties because people aren’t “free” to make certain decisions, but what exactly aren’t people “free” to do under socialism?  Capitalists (those who own a significant portion of the means of production) wouldn’t be “free” to control or exploit others the same way that monarchs and nobles aren’t “free” to control or exploit others under political democracy.  Similarly, people wouldn’t be “free” to allow themselves to be controlled or exploited just to survive but it’s unlikely that many people desire such an arrangement anyway.  It’s hard to have or make use of your individual liberties and personal autonomy when you’re living in poverty, being exploited at work, or enduring the stresses and violence associated with an oppressive and alienating society.  The so-called “free market” is a misnomer since it guarantees freedom only to those with a sufficient amount of wealth and power and even then this isn’t always the case.  As mentioned above, small businesses (and under certain limited circumstances, larger businesses as well) are sometimes forced by the market to make decisions that they wouldn’t otherwise make in order to keep afloat so even capitalists confront plenty of situations where they don’t have much freedom under capitalism and should, in many ways, be opposed to it along with their workers.  In order for everyone to experience and enjoy true freedom, all systems of oppression (racism, patriarchy, etc.) need to be dismantled and society needs to embrace full democracy (both political and economic).

Share:
Previous : My View: What We Learned of the Student Housing Crisis on Wednesday
Next : Sunday Commentary: On the Fiscal Viability of Housing Developments