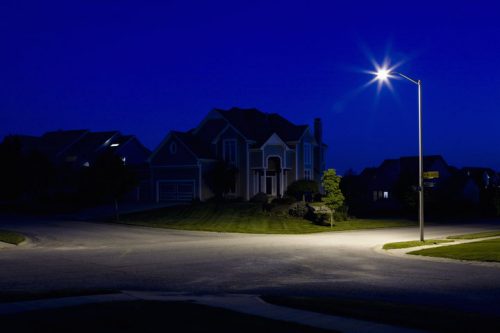 Hundreds of Davis streetlights are set to be converted to energy-saving LEDs, but these lights are not the 2700k Green Cobra lamps that Davis residents overwhelmingly chose in a 2014 survey.

Residents in Davis’ older neighborhoods were spared the conversion to harsh LED streetlights that rocked the city in 2014, when glaring 4000k blue-white streetlights replaced the mainstay sodium-vapor lamps in the 2200k warm-amber light spectrum.

After numerous complaints, the city stopped the installation of streetlights, having already installed 650 lights. The city then decided to allow residents to view a demonstration of multiple streetlights and “vote” for the light most appropriate for Davis. This is an example of city responsiveness to citizen concerns at its best!

Many lights in the demonstration were in the 3000K range. Though technically the same light frequency, different lights produced vastly differing light quality, output, coverage and “pleasantness.” Citizens chose the Green Cobra as Davis’ streetlight of choice for residential areas.

Those running the streetlight program saw a clear preference toward the 2200k “amber glow” of the sodium vapor lamp. After the vote, a 2700K Green Cobra lamp came on the market that was clearly a deeper hue of amber — even closer to the warm glow of the old sodium vapor lamps.

The city chose these newer lamps on the belief that these lamps had even more of the light quality that the citizens were looking for. Test lamps of the 2700K Green Cobra were added to the field

survey area in West Davis, and the response was overwhelmingly positive.

What many people didn’t realize — and the city failed to inform — is that about 300 streetlights in Davis are the responsibility of PG&E, not the city. This includes most of Davis’ classic neighborhoods including Old East, Old North, University, Oeste Manor, Davis Manor, Huntwood Park, the Miller Addition, Central Davis and a small part of South Davis.

After the city announced that the program was completed and no new LEDs turned up in our neighborhood, I inquired and discovered our streetlights were not maintained by the city. Few noticed or complained, as the old neighborhoods continued to enjoy the warm amber glow of sodium-vapor, and would until PG&E got around to changing the lights.

What no one considered was that PG&E would not honor the choice of Davis citizens when it changed these streetlights to LEDs.

Those of us in the old neighborhoods received a letter from PG&E just after Christmas announcing that our streetlights would be changed out over the next few weeks. Few gave that letter a second thought.

However, I became concerned because PG&E made no mention of light frequency or the Davis streetlight program. The letter included a small before/after picture showing a vastly whiter light and an increased area of illumination, two of the very concerns that led residents to reject the initial Davis LED lamp.

Upon inquiry to PG&E and the city, I learned that the installation by PG&E would be a 3000K model, quite a different light than the one chosen by Davis residents.

City staff did ask PG&E to install 2700k Green Cobras, but PG&E refused as Davis’ lamp of choice was not available in its LED replacement program. Residents of affected neighborhoods were not told of test lights installed by PG&E, nor given the opportunity to evaluate or compare the light.

We appreciate PG&E supporting replacements that, at least technically, meet American Medical Association and dark sky standards, and we support LED replacements, as such, for their energy-saving qualities. However, PG&E’s LEDs are not the lamps chosen by Davis residents in the survey, nor are they visibly warm and amber like the Green Cobra lamps.

In directing many neighbors to compare PG&E’s proposed lamps and the residents’ 2014 choice, everyone I talked to prefers the 2700k Green Cobra lamp. One of our neighbors said of PG&E’s proposed replacement lamp, “They just aren’t appropriate for our neighborhood.” Another said, “The new lamps are more like task light.”

Following concerns expressed to the city and PG&E last week, the city asked PG&E to halt the replacement program for two weeks. With no further intervention, installation could resume as early as Jan. 29.

I and many other residents of the old neighborhoods ask that city officials work further with PG&E to find a way to install the 2700k Green Cobra streetlight fixtures on our residential streetlights. If this cannot be done within the current PG&E program, then it should be done outside that program.

If the city has to buy more Green Cobra lamps, then that should be done. Buying Green Cobras for approximately 300 PG&E-maintained lights on residential streets will be much less than the cost of replacing the 650 blue-white LED lamps in 2014 following citizen complaints. Better to do so now than after the PG&E-proposed lamps are installed; Davis has been down that road before.

Our evening wish — and our request of PG&E — is simply to retain Davis’ warm amber glow!

Alan C. Miller is a 38-year Davis resident and a 31-year resident of Old East Davis.

Map of Streetlight Locations Subject to Lamp Replacement by PG&E:

PG&E’s proposed lamps: Along Eighth Street between A Street and Eureka Avenue

Spoken Comments may be given at:

Written Comments may be sent to: