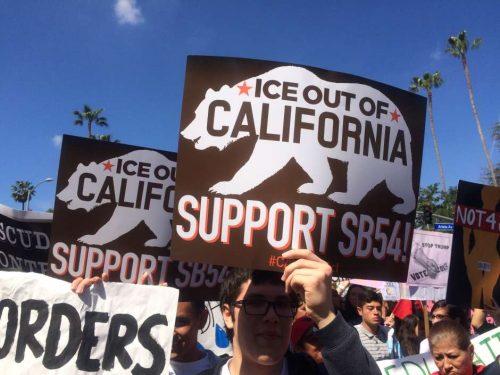 Acting Immigration and Customs Enforcement (ICE) Director Thomas Homan, who has been appointed to become the permanent head of ICE by President Trump, said in a television interview on Tuesday that he believes politicians running sanctuary cities should be arrested and charged with crimes.

On Fox News Tuesday, Mr. Homan threatened that political leaders in sanctuary cities, who don’t cooperate with ICE officials looking to make immigration arrests, are breaking the law when they “knowingly shield and harbor an illegal alien.

“That is a violation of 8 USC 1324. That’s an alien-smuggling statute. I’ve asked the Department of Justice to look at this,” he said. “Can we hold them accountable? Are they violating federal law?”

He suggested those politicians should be held “personally accountable.”

The law, which went into effect on January 1, “bars law enforcement officers in the state from arresting individuals based on civil immigration warrants, asking about a person’s immigration status or participating in any joint task force with federal officials for the purpose of enforcing immigration laws.”

Governor Brown said in his signing statement that the law “will protect public safety, while bringing a measure of comfort to those families who are now living in fear every day.”

However, Mr. Homan said, “The state of California better hold on tight.  More citizens are going to die because of these policies.”

“You want to arrest local officials for standing up for immigrants, you know where to find me,” said Mayor Darrell Steinberg of Sacramento in an interview on CBS 13. “Today you have the director of Homeland Security making the most absurd ludicrous Trumpian statement possible.”

Mayor Steinberg was joined by other mayors in condemnation.

“It’s total hogwash,” said Dallas Mayor Mike Rawlings, saying he has “zero fear” of being arrested, in part because he takes issue with assertions that Dallas unlawfully shields immigrants from federal authorities. “No one is going to be arrested, especially here in Dallas. We’re not a sanctuary city. We cooperate with ICE. This is basically rattling a saber to make good sound bites.”

The Dallas News reports, “A number of Texas cities, including Dallas, Houston, San Antonio and Austin — all led by Democrats — have resisted the president’s hardline approach to immigration, prompting a state law aimed at pressuring local jurisdictions.  Leaders in those cities would presumably be targeted under Homan’s approach.”

Houston Police Chief Art Acevedo told the Houston Chronicle that the threat smacked of an attempt to trample on “states’ rights and local rights.”

Austin Mayor Steve Adler vowed to continue to “oppose anti-immigrant policies, regardless of the personal consequences…. Threatening to jail political opponents, especially for laws they aren’t

breaking, is not the America I grew up in.”

While the acting director has made these kinds of statements previously, this marks a new escalation in his war on California.

On October 6, after the passage of Senate Bill 54, Mr. Homan issued a statement: “Governor Jerry Brown’s decision to sign SB 54 and make California a sanctuary state for illegal aliens – including those who have committed crimes – will undermine public safety and hinder ICE from performing its federally mandated mission. The governor is simply wrong when he claims otherwise.”

At that time, he said, “ICE will have no choice but to conduct at-large arrests in local neighborhoods and at worksites, which will inevitably result in additional collateral arrests, instead of focusing on arrests at jails and prisons where transfers are safer for ICE officers and the community. ICE will also likely have to detain individuals arrested in California in detention facilities outside of the state, far from any family they may have in California.”

She added that it was “outrageous” for Mr. Homan to threaten “to prosecute state and local government officials for carrying out lawful sanctuary policies.”

In a Tweet, the ACLU called the statement an “outrageous threat” that “disqualify Homan from consideration for the permanent ICE director post.”