The request is to approve a 130-unit student oriented apartment building with 708 beds, a bike barn, parking areas, swimming pool, and various amenities.

There are currently 24 dwelling units on the site. These consist of 10 single-family homes and a 14-unit apartment complex. The proposal would result in a net increase of 106 units over the

The remaining floors would contain the remainder of the residential units along with study spaces.

The proposed project would be leased by the bed and not by the unit. “For each lease, the tenant would be assigned a unit and the tenant’s specific bedroom and given personalized access rights to the common areas, which are pool area, clubhouse, study rooms, secured bike areas and main apartment building.” 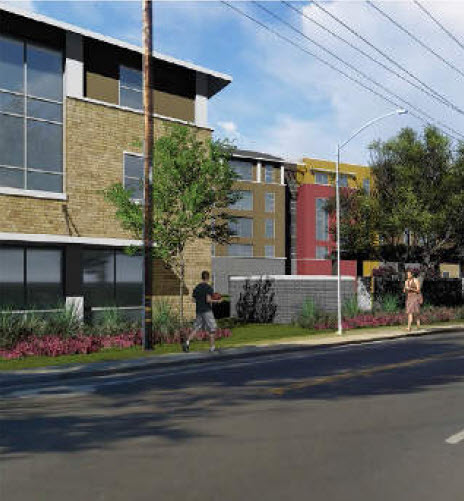 Staff notes that the infill project is determined to be a transit priority project by both staff and SACOG (Sacramento Area Council of Governments).  In addition, “the analysis in the project EIR supports the conclusion that the proposed project meets the criteria set forth in Public Resources Code section 21155.1 to be declared a sustainable communities project by the City Council requiring no further CEQA review.”

Staff writes that they have received numerous comments on the project and the EIR from neighbors, interested citizens, and commissions during various public meetings and outreach.  They believe most comments have been fully addressed in the Final EIR.

However, staff goes into detail addressing issues of policy, land use, development standards and site plan.

There are concerns about traffic and circulation issues, which staff believes “the EIR has adequately addressed.”  They write: “No new evidence has been provided to refute the expert analysis and mitigation measures in the EIR to support the claim that this project would exacerbate the traffic and circulation situation at the Richards Boulevard and Olive Drive intersection if the proposed project applications were approved. An unsubstantiated assumption is not adequate to refute the analysis performed by trained experts.”

There is the issue of whether an overcrossing should be constructed prior to the project development.

Staff responds: “The construction of the overcrossing is a separate City decision, and a capital improvement project (CIP). It is not part of the proposed project.”

They note: “It cannot legally be required of the proposed project to bear the full cost of the overcrossing construction. However, this project will pay its fair share consistent with Government Code. A recommended condition of approval also requires the project to pay applicable development impact fees in accordance with City policies.”

The applicant has agreed through the development agreement “to contribute additional funds to the improvement of the overcrossing.”

Third, there were concerns that UC Davis should provide student housing, not the city.  Staff notes that council passed a resolution in December 2016 that requested “UCD provide housing for a minimum of 100 percent of the projected student enrollment growth, and at least 50 percent of total UC Davis campus student population in the LRDP. This project will not prevent UC Davis from providing additional student housing.”

Staff notes: “There is a housing shortage in the City, and provision of an off campus student housing may provide some relief, especially to single-family homes currently being occupied by students in the City.”

Fifth, there were concerns about the payment of in-lieu fees only, but staff notes that the applicant has revised their plan to include onsite affordable rental units and that in-lieu fees are no longer part of the plan.

There were also concerns about land use, namely density.

One issue was parking with the proposal to provide 240 parking spaces, which is fewer than the 256 minimum required by code.

Staff believes that “the recent movement toward reduced automobile usage and promotion of multi-modal transportation, including the use of rideshare such as Uber or Lyft, biking, walking, and Bus services, coupled with the location that is near campus and downtown, justify a favorable consideration of the proposal.”

On the other hand some suggested that “zero parking should be provided in order to discourage driving.”  Staff does not “believe that it is a reasonable option since it may impose parking hardship in the area.”

There are complaints that 60 feet might be too tall.  Staff responds, “The proposed building height is acceptable given the tiered height nature of the proposal and the fact that the 5th floor portion will be adjacent to the railroad, thus having a beneficial effect on the neighborhood and site; noise screening. As addressed in the EIR, there are no known adverse effects due to the 5-story portion of the building.”

On energy efficiency, there is a belief that the project should be a LEED Gold similar to Sterling Apartments, or LEED Gold certified.

11 thoughts on “Lincoln40 Project Goes to the Planning Commission”