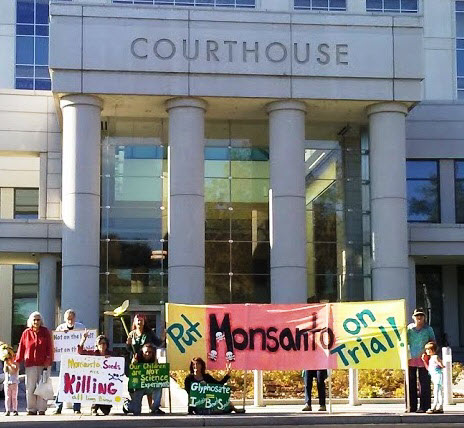 The trial of 10 anti-Monsanto protestors was delayed for a third time here Wednesday, but not before the defendants – all but one representing themselves and all promising to “put Monsanto on trial for poisoning the world” – scored some heavy punches in Superior Court.

The defendants’ new trial is now set for Feb. 27, but Judge Paul Richardson is taking the simple infraction case, now set in traffic court, as a more serious matter. He’s reserved at least a half day and then another half day if necessary to hear the case.

The Yolo County District Attorney office seemingly dumped the case into traffic court last year – the activists were arrested demonstrating at Monsanto May 22, 2017 – by not charging them with misdemeanors and thus avoiding a jury trial and the necessity of the county providing lawyers for each defendant.

But the defendants are, as the judge, treating the charges seriously. The Monsanto Woodland facility is the largest bioseed facility in the world.

The defendants have several environmental experts ready to testify as to the danger of Monsanto’s work, and this week Judge Richardson agreed with defendant Robert Saunders, refusing to quash

The judge also did not move to quash the subpoenas by Saunders of two Monsanto executives – an attorney representing Monsanto on the matter was in court Wednesday and suggested the subpoenas were improperly served. But they didn’t make any public statements or address the court directly.

But the judge ordered “all those subpoenaed” to appear Feb. 27 at the new trial, and Saunders said that if Monsanto “doesn’t like us properly serving the executives at work we can go to their homes to do it.”

In a trial brief filed by Saunders, and joined by the other defendants, he argues that the ordinance charging the peaceful protestors with “loitering” is unconstitutional and an attempt to “chill” free speech.

“(T)his matter was a peaceful protest where protestors were exercising their First Amendment rights to gather and be heard as to a meaningful interest…(the action) presents no harm to anyone and the court should dismiss in the interest of justice,” the brief said.

Richard Dudek, the only attorney representing defendant Elliott Adams, earlier filed a court brief claiming the loitering charge was unconstitutional as applied to free speech activities and should be immediately dismissed.

“Defendant Adams…objects to enforcement of the ordinance as a violation of the due process clause of the Fourteenth Amendment of the U.S. Constitution (and) unduly restricting his First Amendment rights,” according to the trial brief. Recent U.S. Supreme Court cases have tossed out similar ordinances, opining that “freedom to loiter” is protected, Dudek said.

One defendant, Susan Roberts Emery of Nevada City, had a prepared statement for the trial court the last two times. Part of it read:

“I have friends who have autistic children, and grandchildren. I was at the Monsanto for those children…(and) for my great niece Rayna, who was born with her intestines outside her body…(and) for my husband Ben, who suffered colorectal cancer, my mother-in-law Barbara with breast cancer and my father-in-law Bob with Lewy Bodies Parkinson’s and my own father, Lt Col George Roberts, who died of dementia. I was there for the farmers who do not even know they are spray(ing) a carcinogen.”

Demonstrators maintain that studies that show Monsanto controls 92 percent of the world’s seed and conducts genetic engineering (GE) to produce GMOs (genetically modified foods), which some scientists and environmentalists insist are linked to human health and environmental issues.

Activists cite the World Health Organization’s determination of Monsanto’s Roundup to be a “probable carcinogen.” Glyphosate has been found in groundwater and 60-100 percent of rainwater around the world, said activists, who said it portends global mass pollution.

Activists said GMOs are banned or partially banned in France Switzerland, Ireland, Russia, Japan, New Zealand, Costa Rico, Austria, Germany, Greece, Peru and Hungary, among other nations. Labeling products with GMOs is a controversial issue and not mandated in the U.S., but about 60 countries have labeling.  Many polls show an overwhelming number of Americans would accept GMO labeling.

“Glyphosate is the most widely used pesticide in California and in the United States.  More than 280 million pounds were used in U.S. agriculture, primarily due to the widespread adoption of genetically engineered crops.  In 2013, 10 million pounds was used in California alone, with half of that usage being sprayed in eight of the state’s poorest counties on farm fields, lawns, gardens, school grounds, and parks, with five of those poorest counties being in the south Central Valley,” according to literature to be presented at the defendants’ trial.