Back in October, the developers of the Nishi project submitted a preliminary project narrative and conceptual site plan for development of the Nishi property.  At this time, the proposal includes approximately 2,200 beds in perhaps 700 apartment units.

In order to get this onto the June ballot, it will have to go to the Planning Commission in two weeks, followed by the City Council no later than February 6.

On Monday, staff asked the Finance and Budget Commission to comment on the fiscal model.  The commission voted 5-2 on a motion in which they found: “We also generally concur with the estimate that annual ongoing revenues and costs for the city from the project would be modestly net positive over time.”

According to the staff analysis: “The Nishi project is anticipated to be revenue positive according to the fiscal model analysis. The project will contribute property taxes to the City’s General Fund based on the value of the property. The new property tax revenue for this project would be $2.6 million over 15-years with a valuation of $266 million and a tax rate share of 6.9275%. If the tax rate share went to 10.3912%, the revenue over 15-years period would be $3.9 million. Sales tax revenue over 15-years is $ 2.8 million.”

Staff finds: “Over a 15-year period, the project will contribute $13.8 million in revenue projections while expensing $12.2 million in expenditures. Parks, greenbelts, street trees, all residential street and connectors will be maintained by the development.” 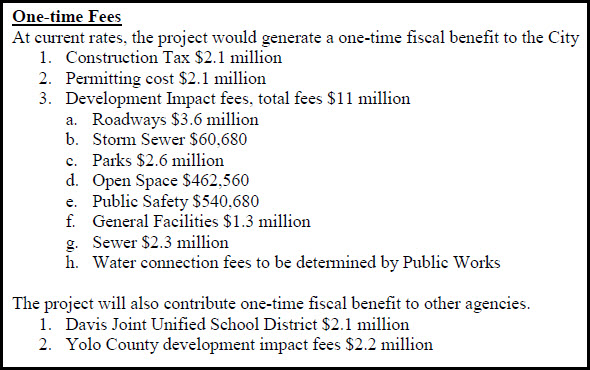 Given the preliminary nature of the project, there are caveats here.

As the commission notes, “the commission did not have available to it a complete and detailed description of the project, a supplemental environmental analysis, or a development agreement with the city. Therefore, any conclusions we have reached should be considered preliminary and subject to change and our commission will continue to review these numbers.”

The commission found the estimate developed by staff of one-time fiscal benefits from the project of $13 million in construction tax revenues and impact fees to be “generally reasonable given the data currently available.”

They write: “These resources are to be used to offset unspecified future costs of the city’s growth. However, we note that the city has significant flexibility under city ordinances to use these

resources to address infrastructure needs, like improving roads and parks.”

In addition to finding the project “modestly net positive over time,” they note the potential that the revenues could be either higher or lower than estimated.

Furthermore, “the EIR adopted for the original, larger, version of the Nishi project suggests that police and fire costs for serving the new residents could be nominal.”

Therefore, they conclude that “the net fiscal benefit of the project could be greater than estimated.”

However, on the other hand, “revenues generated from the project could be less than estimated if Davis voters reject renewal of the parcel tax. Moreover, the estimate assumes voter renewal in 2020 of the full rate currently imposed in Measure O sales taxes. Council or voter actions to reject or reduce Measure O revenues would also reduce the revenues generated by this project and its net fiscal impact.”

When the development agreement is written, it could contain important fiscal provisions “such as a Community Services District assessment, community enhancement funds, and the potential refund of the city’s pre-development costs should the new project be approved by voters.”

They recommend that “these negotiations be informed by an updated residual land value analysis of the revised project.”

Finally they recommend the commission be provided with the opportunity to review and comment on the fiscal provisions of the proposed development agreement.

They also recommend “the inclusion in any development agreement of language to deter master leasing of Nishi apartments by the campus because of the potential negative impact on city property tax revenues. A similar provision was included for the Sterling apartment project.”