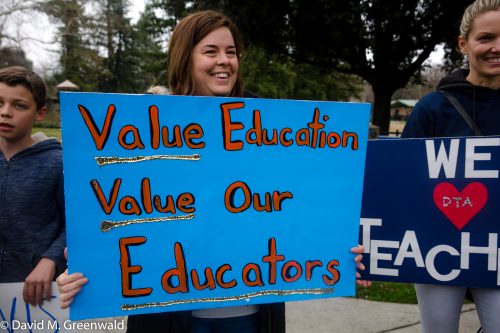 A Dunning column from earlier this week noted with sympathy teachers’ efforts to lobby the district with regard to pay and compensation.

However, he offers: “While my sympathies in this battle lie squarely with the teachers, arguing ‘benefits’ could quickly backfire.”

He continues: “Many folks in the private sector (see photo above) turn green with envy when they see the benefits that public school teachers, city of Davis employees, UC Davis employees and state workers take for granted.  It’s a losing argument.”

I asked him about the comment, and he noted: “Teacher health benefits are certainly below city benefits, and they are absolutely shameful for support staff such as janitors and secretaries.”  But he said that “speaking as one from the private sector who has seen his health care benefits dramatically reduced over the last five years, I think it’s a losing argument. The average teacher receives twice the benefit I do and many in the private sector have no benefits at all.”

I must admit the statement caught me off guard.  As many know, the Vanguard a decade ago was one of the first to report the out-of-control compensation within the city.  We were not shy at reporting six-figure salaries and $150,000-plus average compensation for city employees, particularly firefighters.

But, after spending years pushing for rollbacks of city employee compensation, I was pretty stunned to learn that the school district does not fully fund teacher health insurance.  City employees, even those who make a fairly modest wage, get a nice premium health insurance plan.  State employees like my wife, likewise, have their health insurance fully covered by their employers.

And yet teachers, who get a modest salary to begin with, are paying in some cases large amounts out of pocket for their health insurance.

On Thursday, I sat down with Davis Teachers Association President Dianna Huculak along with fellow teacher Amanda Zimmerman, who is DTA Membership Chair, for a story that will appear in a future Vanguard article.  The Vanguard

has also requested additional information from the district about their health care plans.

But what Ms. Huculak and Ms. Zimmerman told me was quite stunning.

The district offers their health plan through CalPERS (California Public Employees’ Retirement System).  “The cheapest one is Kaiser,” Ms. Zimmerman explained.  “What we don’t have is Bronze Plan, Silver Plan, and Gold Plan options.”

Of the cost for the health care plan, the district picks up a portion of that cost.  But both teachers I spoke to were paying close to $400 per month.  Ms. Zimmerman said, “Because in October the health care costs went up, I am now taking home less this year than I did two years ago.”

“There is not a single plan where the district would cover the whole (costs),” Ms. Huculak said.  “No matter what you get, you’re going to be paying.”

“The contribution that the district pays was set in 2008 and has not gone up at all in that time,” Ms. Zimmerman said.

“If you look at surrounding districts, part of it is that they have far more competitive health care packages,” Ms. Huculak added.  “When I worked in Sacramento, my health care was completely paid for.”

“A lot of districts if you take single coverage, you can be covered 100 percent,” Ms. Zimmeran said.

“That is one of the sticker shocks of coming to Davis,” Ms. Huculak said.  “I talk to teachers coming to Davis, they’re like the pay is slightly lower but I can ride my bike to school.”  But when they talk about health insurance costs, she said, “That’s probably something they didn’t consider when they came to work here is because how much less money they’re actually going to get.”

Only about 50 percent of employees take the district’s health care.  Some are taking their spouse’s health care benefits if they are better than what DJUSD provides.  But some are taking health care from Covered California, because, as Ms. Huculak told the Vanguard, overall it is cheaper.

Ms. Zimmerman also noted, “A lot of people will take Single Payer for themselves and then put their family on Covered California.”

But as much as a single teacher has to pay an additional $400 just for health care, it is families that really are burdened by the district’s health care coverage.

“One of my colleagues, she has kids, I think one-third of her paycheck just goes towards paying for health insurance,” she said.

Back in October a teacher told the school board her story.  She explained, “We can’t afford a district health plan.  I’ve had to find the cheapest plan outside the district that works with our doctor.”

She said that she has a $6000 deductible and that if she put her daughter on the district plan, they would have no money left over.

She said, “It’s significant.  One-third of your paycheck or more with your family.”

The teachers acknowledged that health care is of course a problem for many private sector jobs as well.  But all of this is one reason why there has been a several decades-long push for some form of health care insurance, either in the form of the Affordable Care Act or Universal Health Care.

I certainly get Bob Dunning’s point that teachers, while not receiving the same benefits as city employees or state employees, are still getting better benefits than the private sector.  But, on the other hand, if many are paying one-third of their already modest salaries for coverage for their families, why would a young teacher with a family come to Davis in the first place, if other districts offer better health care coverage because they are larger and have access to better plans?

Is it really a losing issue that points out the disadvantage that Davis has in attracting quality and younger teachers?

I don’t see this as a losing issue, in fact, I see this as amplifying the overall point that if we want to maintain the high level of education in our district, we are going to have to figure ways to make sure we offer competitive compensation to our teachers.

33 thoughts on “My View: Let’s Not Pretend Like Teacher Health Benefits Are Not Subpar”