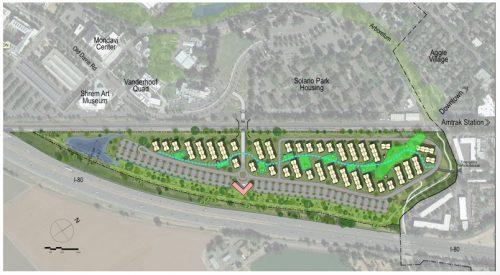 In 2016, the Nishi project had a lawsuit filed against it on the basis of an inadequate traffic study and a non-compliant affordable housing component.  That lawsuit was filed by a front group called “Davis Citizens Alliance for Responsible Planning” and attorney Don Mooney.

However, Judge Samuel McAdam denied the claim.  The affordable housing component was not enforceable following the 2009 Palmer decision which held that the Costa-Hawkins Act “precludes local governments from requiring a developer to set affordable rental levels in private rental housing units unless the developer agrees to do so in exchange for financial assistance or other consideration from the local government.”

He also rejected the traffic study challenges.  Mr. Harrington briefly filed for appeal and then dismissed it.

With a new Nishi project, the city on Tuesday received a letter threatening litigation from the Soluri Meserve Law Corporation based out of Sacramento on behalf of “the Davis Coalition for Sensible Planning.”  Here the challenge is the project and city’s attempt “to rely on a CEQA [California Environmental Quality Act] Addendum for its approval of the project.”

The lawyer argues that “there are potentially both new significant impacts and substantial increases in the severity of existing significant impacts. Accordingly, the City must prepare a supplemental EIR for the Revised Project.”

So they argue instead: “A supplemental EIR is required because there are new related projects that could not have been known at the time the EIR was certified, which, when considered cumulatively, will substantially increase the project’s significant impacts on agricultural and forest resources.”

They argue: “Further, the EIR Addendum did not include an updated related project list or disclose new information with respect to related projects and their cumulative impacts on agricultural resources. Thus, the Addendum also fails as an informational document.”

On air quality, they argue: “A supplemental EIR is required because the Revised Project will potentially increase the project’s significant air quality impacts by exposing the additional residents

They write: “The EIR concluded that residential land uses, as sensitive receptors, would be exposed to toxic air contaminants, diesel PM [particulate matter], and ultrafine particulate matter generated by nearby trains on the Union Pacific Railroad and vehicle activity on the I-80, and that the resulting health impacts were significant. By adding approximately 280 more residents, the Revised Project substantially increases that significant impact, triggering the need to prepare and circulate a supplemental EIR.”

They letter argues that the Addendum incorrectly cites the 2015 case of California Building Industry Association v. Bay Area Air Quality Management District.  They argue that “the rule it established does not apply where the Project would exacerbate existing conditions, and the Revised Project (as well as the previously-analyzed Project) would exacerbate the existing conditions by, for instance, adding more automobiles and trucks (through consumption of goods in Davis) to the existing roadways, including the I-80, and by increasing ridership on passenger trains running on the Union Pacific Railroad.”

They argue: “The Addendum is premised on legal error, and also fails as a legal document, by relying on CBIA to suggest that the Revised Project’s health risk is less than significant.”

With regard to greenhouse gas (GHG) emissions, they write, “The California Supreme Court has recently stressed the importance of tracking changed conditions and new information in the area of greenhouse gas emissions.”

Yet, they argue that “the EIR Addendum does not account for the changed regulatory conditions and new information related to GHG Emissions.”

They argue, “Since the state’s goals are now stricter, that analysis would have resulted in findings of more severe significant impacts.”  And they add, “The same is true for reliance on the now outdated 2013 CalGreen Title 24 building standards, the 2012 SACOG MTP/SCS, other applicable plans, which when analyzed would result in more severe significant impacts. Individually these updates require a supplemental EIR, but when taken together, the necessity is compounded.”

Further they argue that the revised project “has substantially changed the land use mix by eliminating the research and development portion of the Project. Accordingly, the land use consistency analysis is no longer accurate and must be updated, especially in terms of consistency with the General Plan.”

With respect to noise: “A supplemental EIR must be prepared and circulated because the revised project will substantially increase the project’s significant noise impacts by exposing additional residents to substantial noise.”

But, as the mayor explained, the university access point is in the baseline project features, which means the project cannot even be built until they gain that access.

They conclude, however, that “the requested General Plan Amendment is not supported by the record.”

They continue, “[T]he Revised Project has substantially changed the land use mix by eliminating the research and development portion of the project. Accordingly, the land use consistency analysis is no longer accurate and must be updated. The brief analysis in the staff report is insufficient because it does not meaningfully address the changed conditions, and only provides a cursory analysis of Policy LU O.1.”

They argue that “the City Council cannot place the revised project on the ballot for voter approval under Measure J/R.”

It is worth noting that no legal challenge to land use decisions in recent years has received judicial validation in a court of law.  There have been a number of out-of-court settlements, for instance with the water project, the hotel conference center, and the Marriott, which have been created.  However, when a judge has issued a ruling, they have found the city in compliance, including the most recent Nishi decision.

Many, however, have come to believe that the lawsuit against Nishi last time out played a role in its electoral defeat, even though the affordable housing challenge completely missed the change in the law under Palmer.

2 thoughts on “Another Potential CEQA Challenge to Nishi”