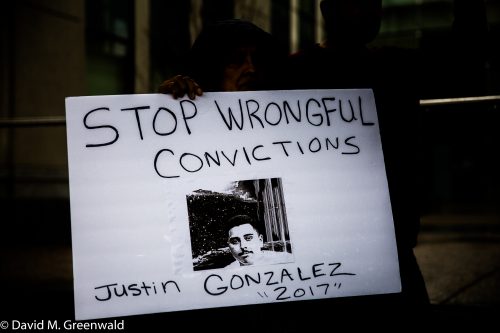 One of the hallmarks of our legal system is the presumption of innocence that supposedly underlies it.  The key tenet in our system is supposed to be that a defendant is presumed innocent until the prosecution proves their case beyond a reasonable doubt to the jury.

Many of course question whether that works in real life – many members of the jury will operate on the implicit assumption of the presumption of guilt.  In my eight years of observing criminal trials, it is far more likely that a close call will go toward conviction than toward acquittal.

Once convicted, the legal system basically reverses the legal standard.  The assumption becomes that the jury made the right call unless proven – and in most cases proven overwhelmingly – that they did not.

On the surface that may seem reasonable since we hold jury verdicts to be sacrosanct in a way.  They are the decider of fact.  They are the ones that weigh and deliberate the evidence.

The problem is that the output is only as good as input.  And so when we have verdicts that arise out of cases with ineffective defense, faulty forensic evidence, tainted eyewitness identification or

witnesses who are compromised, we end up with many wrongly decided cases.

A key question that arises is at what point do we hold the jury verdict sacrosanct?  I must say, while I will not say I was surprised by Judge Dan Maguire’s decision on Friday in the Justin Gonzalez matter, I found it disappointing nonetheless.

That is in part because, in my time of observing Judge Maguire, he bends over backwards to be fair.  In fact, he is the only judge I have seen overturn a conviction from his own courtroom – that was in the Eric Lovett case, and in part due to a change in the law as the result of a Supreme Court decision.

The case against Mr. Gonzalez came down to the testimony of Ruby Aradoz.  I went back and confirmed this with defense attorney Keith Staten, that the only person who says they saw Justin Gonzalez with a knife was Ruby Aradoz.  The only other person who could even place him at the murder seen was Ponce Perez, who as many as three times could not identify him.

So, while Judge Maguire is correct that the defense had ample opportunity to puncture Aradoz’s credibility as a witness – and, more importantly, did puncture it, he fails to account for the fact that the only possible way to convict Justin Gonzalez on the murder charge was to believe Ms. Aradoz – because there was nothing else to base it on.

Judge Maguire, in ruling as he did, came to the conclusion that, while he was troubled that the defense did not have access to the recording of the Aradoz interview, he believes it would not have changed the verdict had they had it.

My question here would be: how does he know?

This is the problem.  He is treating the jury verdict now as sacrosanct.  Mr. Gonzalez no longer is entitled to reasonable doubt, he is no longer entitled to the presumption of innocence.  No, at this point Mr. Gonzalez is seen by Judge Maguire as guilty unless there is strong and overwhelming evidence to the contrary.

While the judge was troubled by the lack of the defense having potentially key evidence, he is not willing to consider the stakes here.  If Judge Maguire is wrong, an innocent man goes to prison for essentially the rest of his life.  If he errs on the side of caution, the state and the court have to go through another six weeks or so of trial for Justin Gonzalez to ensure that he received as fair a trial as possible.

But my question at this point is even more fundamental – if the jury’s verdict is potentially based on false premises, why are we holding it up as sacrosanct at this point?  Judge Maguire is making a guess as to whether that information the defense gleaned from Ms. Aradoz would have made a difference.

Her testimony clearly caught them off guard.  They were expecting her to testify as she had to the grand jury, where she never mentioned seeing Mr. Gonzalez with a knife.

Judge Maguire is making a presumption about what would have swayed the jury and here is the kicker – he never talked to them.  In fact, he denied the defense a motion to unseal their records so that the defense could talk to the jury.

So not only is the judge making assumptions about why the jury ruled as they did, he prevented the defense from learning more.

This was a horrible crime.  The victim in the case was completely innocent and his only mistake was trying to help some strangers.  And he lost his life for it.  Alexis Velazquez is undoubtedly the man who stabbed him.  But punishing a second man, a likely innocent man, is not going to help the victim.  Justin Gonzalez deserved another trial – a fair one – and the people of this county deserve a fair administration of justice, and they just have not gotten one here.