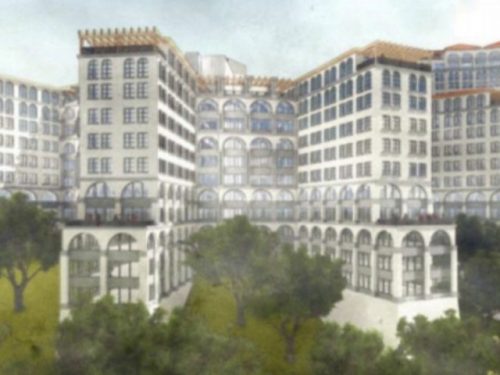 In December, Eileen Samitz in an op-ed wrote: “Davis needs more apartments designed for all, not just mega-dorms.”  In it, she argues: “An alarming consequence of UCD’s irresponsible behavior and delay tactics regarding providing on-campus housing is that many mega-dorms, with all of their impacts and costs, are being proposed by private developers in the city.”

In her comment this week, she pushed away from larger apartments and for more one-, two- and three-bedroom apartments.  She wrote that “since you are advocating for 5,000-6,000 more ‘beds’ in Davis that would be ok, as long as they are 1-, 2- and 3- bedroom apartments so that our families and local workers can live in them too. Then you also get the affordability in rental housing for everyone including students, families, and local workers.

Ms. Samitz is not alone in this push – although it is fair to say that she is leading the way here.  The problem is that people are not examining the data appropriately and therefore coming up with faulty conclusions.

There are two practical problems with Ms. Samitz’ comment from earlier this week.  The first problem is that the rental market for students is so tight, regardless of the structure of rental housing in Davis, that the vast majority of rental units are going to be soaked up by students.  Somewhere between two-thirds and 85 percent of all rentals right now are rented by students, and that number figures to go up higher as the new demand generator is the need for more housing for students.

The second problem is even if you do create a bunch of housing that structurally fits families’ needs, the cost of rental housing is prohibitive for families.  The average two-bedroom apartment,

As much as Nishi is reasonably priced at around $800 per bed, a three-bedroom apartment is going to be around $2400 a month at Nishi.  Given that a family would buy a house and make less in the way of mortgage payments in Woodland and Dixon, how is that a practical solution for most families in Davis?

So the idea that you can configure market rate rental housing that is reasonable for most families in Davis is questionable at best.

But there is a third and more fundamental problem with the narrative, aside from misplaced market realities – it’s simply wrong in structure. 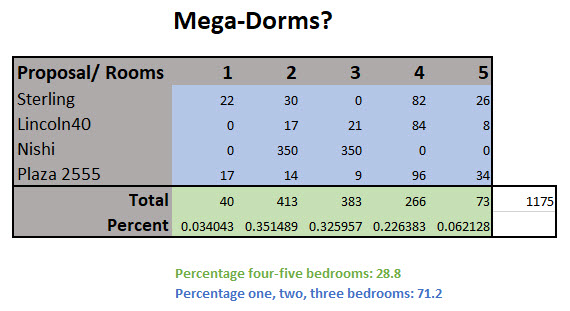 Ms. Samitz argues for a variety of housing types, but, taken in totality, the four current proposals for housing that have either already been approved by council or are close – Sterling and Nishi (Nishi pending a Measure R vote in June) along with Lincoln40 (March 13) and Plaza 2555 (May) – present a much greater variability than critics have suggested.

Taken as a whole, the four proposals project to about 1175 (1205 if you count the 30 micro units at Plaza 2555).  The breakdown of the proposed units is far more diverse than the rhetoric would suggest.

By far the vast majority of the units are expected to be one-, two-, and three-bedroom apartments – 71.2 percent.

Does that fit the mega-dorm narrative?

It is true that Nishi somewhat alters the data picture as it is figures to be a project that is entirely two- and three-bedroom apartments.  But that is actually a huge part of the point.  Each of these projects has very different specific details – which I will lay out shortly.

It is true that if you take out Nishi, the picture changes considerably in terms of the mix of units.  But, then again, Nishi accounts for nearly 60 percent of the overall units anyway, 700 of the 1175.  So we would expect that the configuration of Nishi would substantially alter the picture.

One of the big complaints are the bed leases.  While that has always seemed like a strange complaint for people to make – after all, there are some key efficiency advantages in a tight market to the ability to rent by the room, it turns out only Sterling and Lincoln40 rent by the bedroom.  Both Nishi and Plaza 2555 will have standard unit leases.

She is probably correct.  Fortunately, there are only 73 of the 1175 units that are expected to have five bedrooms in the four proposals.  Of those, only 34 of the 73 figure to be five-bedroom and five-bathroom units.

Again some of the complaints here don’t make a lot of sense.  For instance, Ms. Krich recently wrote, asking “how indeed does Davis justify letting any developer build one bathroom (for 18- to 21-year-olds) per bedroom in drought-prone California when the rest of us make every effort to conserve water?”

There is no evidence that having a private bathroom increases water usage.  In fact, the biggest indoor usages for water figure to be washing clothes and dishes, not bathroom activities like showers and toilets.  By far the biggest use of water is exterior uses, of which apartments generate lower usage per capita than single family homes.

The bottom line for these projects is that they have less in common than you would think.  Some have bed leases, some unit leases, some have private bathrooms, others do not.  The size of the complexes varies a lot as well.

Nishi has 700 units that could be geared toward students due to location of the project, but there is nothing to prevent campus employees from living there as well.

The market realities at this time, including cost, likely mean all four are heavily for students, but for the most part not exclusively so.

Does Davis need more housing for families?  Absolutely.  But market rate, multi-family housing is not generally going to be affordable or practical in Davis for families.

67 thoughts on “Commentary: The Student Housing Mega-Dorm Narrative Is Wrong”