The district is aiming for a November 2018 vote, and surveyed likely November voters from February 5 to 11, with a 4.9 percent margin of error.

The primary purpose of this voter opinion research was “to identify the level of support for a potential $198 parcel tax measure for the November 2018 ballot to support District programs and personnel.”

The key findings: “Although most indicate that maintaining the quality of schools and increasing teacher salaries are worth raising taxes for, fewer than two-thirds see a need for additional funding for local schools.”

Indeed, the survey found, “Initial support for a parcel tax measure is just shy of the two-thirds threshold in this poll.”  However, “Once voters have heard how additional revenue will benefit local schools and students, total support increases.”

However, the pollsters warn, “a measure could be vulnerable to opposition.” 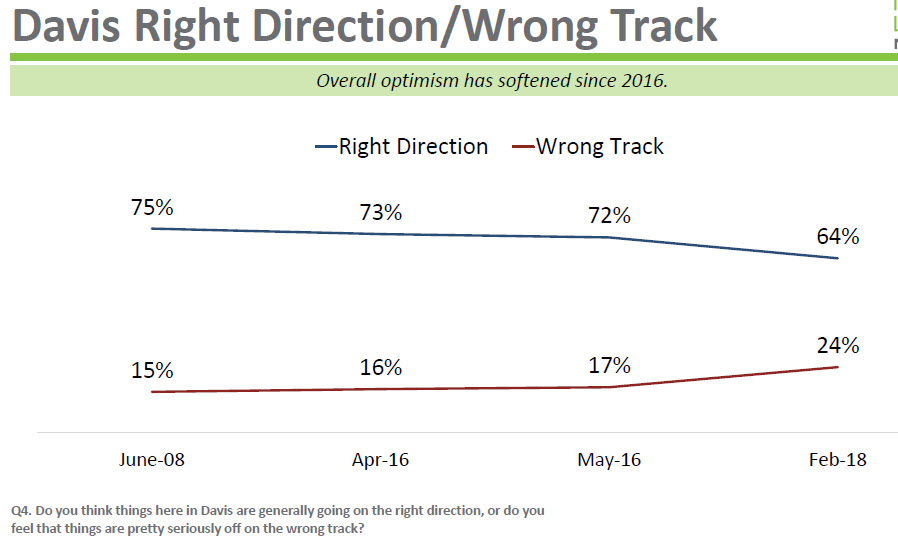 Polling shows that optimism has declined over the last ten years, and strongly since May 2016, going from 72 percent to 64 percent. 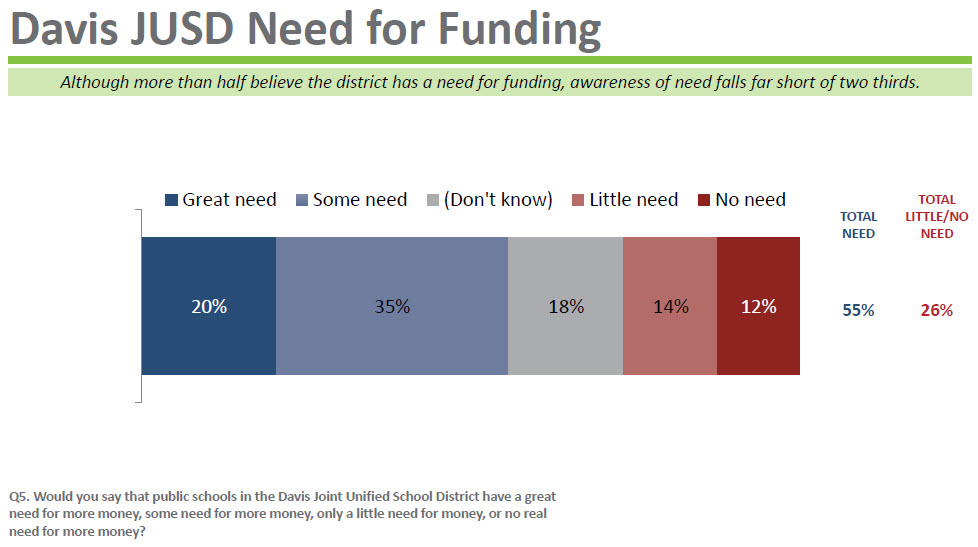 Awareness of the need for funding is only at around 55 percent.  That represents a drop from 71 percent in June of 2008.  But there was only a one percent drop from April 2016 prior to the passage of the last parcel tax. 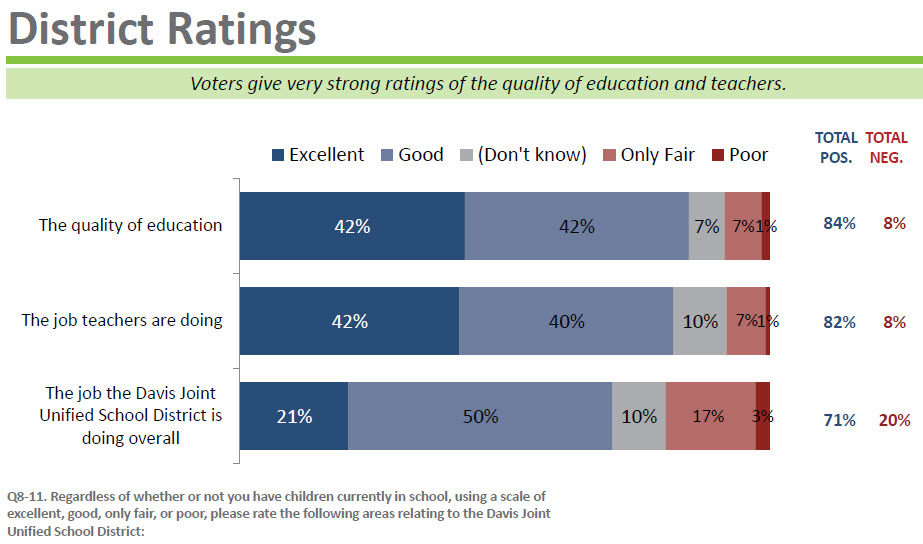 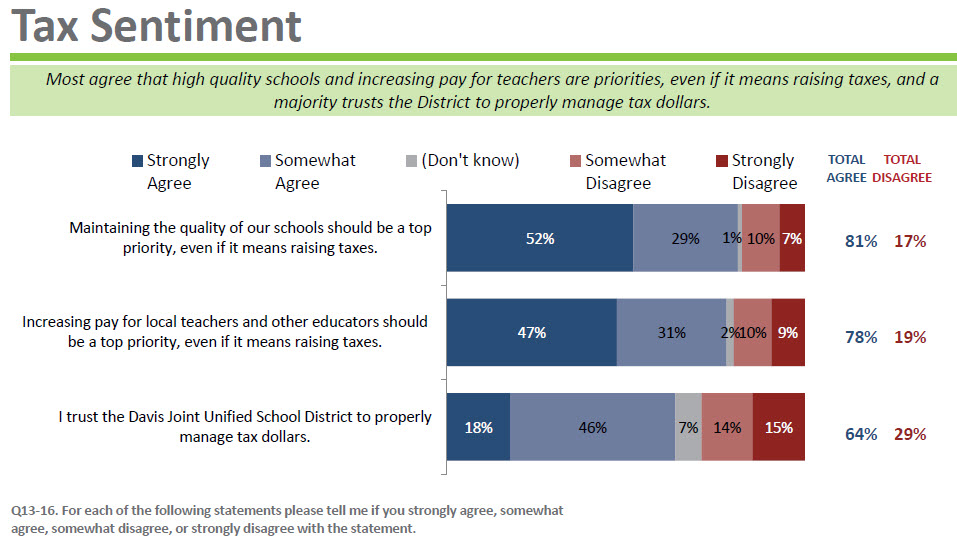 Most voters agree that high quality schools and increasing pay for teachers are priorities.  That remains the case, even if it means that the district needs to raise taxes.   However, a lesser majority (64 percent) trusts the district to properly manage tax dollars.

The portion that has fallen somewhat dramatically is the trust in DJUSD to manage tax dollars, which has fallen from 73 percent to 64 percent in just two years. 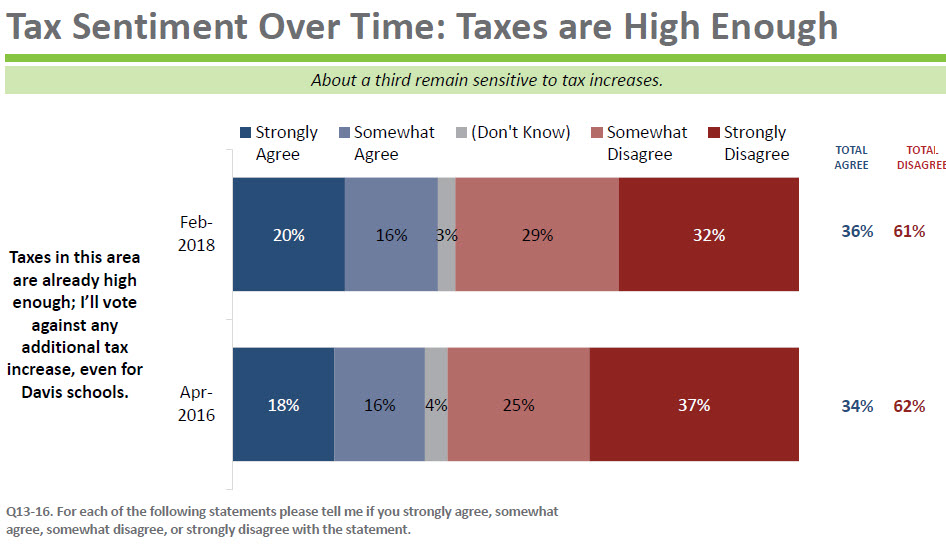 The polling shows the view that “taxes in this area are already high enough” and “I’ll vote against any additional tax increase, even for Davis schools,” is around 36 percent.  That is up very slightly, but perhaps significantly from 34 percent in April 2016.

That puts not only the DJUSD Parcel Tax on the bubble but also the potential city parcel taxes as well. 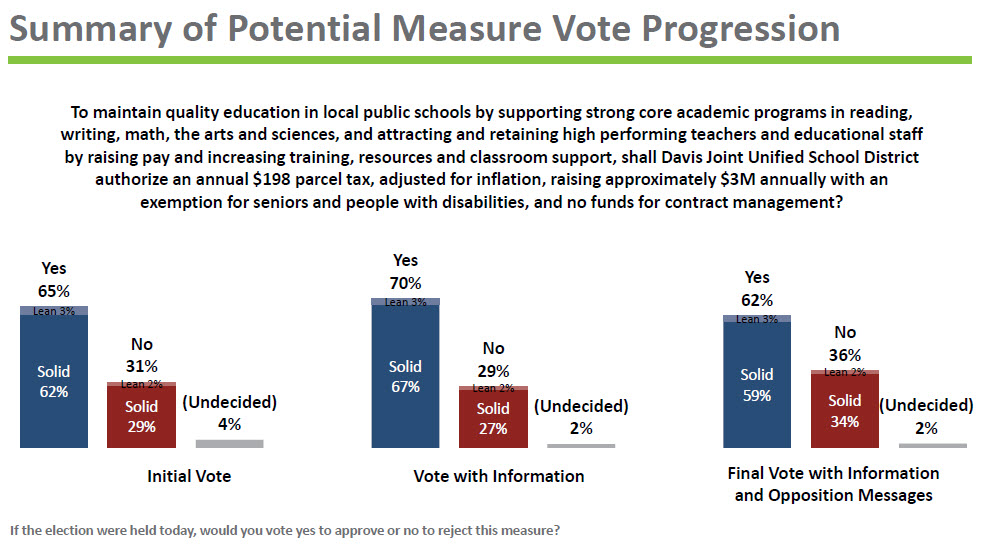 Support for the parcel tax is right below the bubble.  They find initially around 62 percent support with another 3 percent lean.  With information, that number increases to 67 percent with 70 percent total with leans.

Once they introduce information and the opposition messages, that number drops to 59 percent with another 3 percent lean. 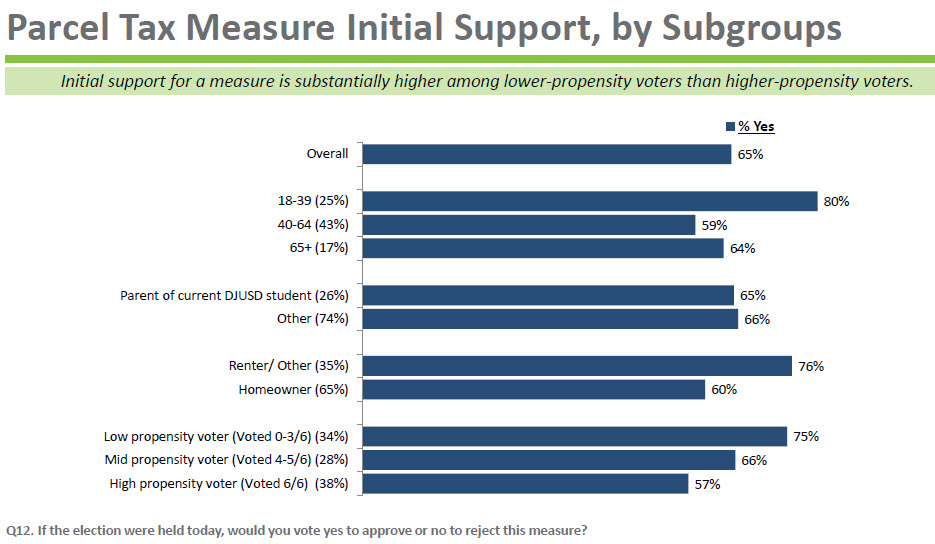 The breakdown is interesting.

Parents of current students are no more likely to support the parcel tax than anyone else.

Renters are much more likely to support the parcel tax than homeowners – although homeowner support is still at 60 percent.

Finally, the bad news is that the more likely people are to vote, the less likely they are to support the measure.

The top messages for support are:

The pollsters conclude the following.

First, “While poll results indicate that reaching the two-thirds threshold may be challenging, in the right environment, a parcel tax measure on the November 2018 ballot could be successful.”

Second, “Voters are divided about whether the District needs additional funding, and a measure could be vulnerable to vocal opposition.”

Finally, “Ensuring that voters understand how additional revenue would benefit education outcomes for local students would be essential to success.”

The one advantage that the district has in this race is that the teachers’ association has a vested interest to provide the necessary labor and ground forces that could push a close measure over the top.