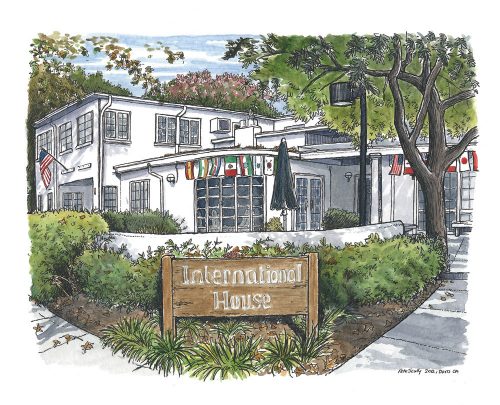 International House Davis, Thursday March 29, April 26, May 31, 2018. International House Davis, with support from the Davis Network for Africa, is pleased to present a 3-part conversation series, led by innovative thinkers and practitioners from, or working between, Northern California and Africa. Co-sponsored with Global Affairs at UC Davis, the series was born from a desire to bring to the public more substantive discourse around the diverse continent. The series is not meant to be comprehensive, but will include the following compelling topics: the unique role of farming and female empowerment through the work of Green Africa in Sierra Leone (March 29, confirmed speaker, Humphrey Fellow Martin Kailie with moderator Kate Scow), notions of “Africa” and African/African-American identity in relation to movements and discourse in the U.S. (April 26, confirmed speaker Dr. Boatamo Mosupyoe with moderator Jeanelle Hope); and contemporary African Science/Speculative Fiction (May 31, confirmed speaker, Moradewun Adejunmobi with moderator Mark Jerng). The series is free and open to the public.

March 29. Martin Kailie will discuss his work as founder and CEO of Green Africa Inc. Kailie, a farmer and social entrepreneur, has worked since 2009 with women farmers empowering them to fight increasing poverty in drought and flood-prone communities in his country, Sierra Leone. Kailie is currently a 2017-2018 Humphrey Fellow at UC Davis. His goal is to learn climate-smart
farming and network with U.S. farmers to support 5,000 women farmers with appropriate irrigation technology, organic farming techniques, and links to markets. Kailie holds an MPhil in Linguistics from the University of Sierra Leone and taught in the same university for ten years before switching to sustainable agriculture and rural development. While documenting endangered languages in his native Sierra Leone, he witnessed the devastating effects of drought and floods on communities. Inspired by that experience, his dream is to use sustainable agriculture to tackle climate change to improve the lives of subsistence farmers at risk from climate change.

April 26. Dr. Boatamo Mosupyoe will speak from her vast research experience on the life, migration, success and failure trends of recent African immigrants in the United States, and its reflection in mainstream discourse and policy-making. Dr. Mosupyoe is Professor and Director of Pan African Studies in the Ethnic Studies Department at California State University, Sacramento. During her time in South Africa he worked with the Anti-Apartheid Movement and was also the chair of the South African International Student Organization and a member of its national executive. Her numerous publications include Development of Thought in Pan Africanism, Women’s Multicentric Ways of Knowing, Being and Thinking, Mediation of Patriarchy and Sexism by Women in South Africa, Institutions, Ideologies and Individuals: Feminist Perspectives on Gender, Race and Class, and Introduction to Ethnic Studies.

May 31. Moradewun Adejunmob i will be discussing contemporary African Science Fiction and Speculative Fiction. She recently edited the Cambridge Journal of Postcolonial Literary Inquiry’s special issue on African Speculative Fiction. An Associate Professor in the African American and African Studies Program of the University of California, Davis, she has also taught at the University of Ibadan in Nigeria and the University of Botswana. Her current research interests are in questions of language and identity in African literature and popular culture. She has also worked on Malagasy literature in French and is the author of JJ Rabearivelo, Literature and Lingua Franca in Colonial Madagascar.

Kate Scow is Professor of Soil Science and Microbial Ecology in the Department of Land, Air and Water Resources and Director of the Russell Ranch Sustainable Agriculture Facility that hosts the Century Experiment. Scow is also Chair of the International Agricultural Development Graduate Group. She is a Fellow of the Soil Science Society of America and Chief Editor for the journal Soil Biology and Biochemistry, and also works in Uganda on soil management and irrigation practices for vegetable production by smallholder farmers.

Jeanelle Hope is a fourth year PhD candidate at the University of California, Davis in Cultural Studies. Her current research looks at the ways in which Afro-Asian solidarity manifest through grassroots organizing, art and culture, and social media. Her broader research interests include: Black radical feminism, transnational feminism, African American women’s history, Blacks in the
West, Black Power studies, and Black queer theory. Jeanelle also serves as this year’s Graduate Student Assistant to the Dean and Chancellor (GSADC).

Mark Jerng joined the UC Davis Faculty in 2006. His research specializations include Asian American literature and transnationalism, critical race theory, science fiction and fantasy (especially by contemporary Asian American and African American authors), genre and narrative theory, and law and literature. He is the author of Racial Worldmaking: The Power of Popular Fiction and Claiming Others: Transracial Adoption and National Belonging .