There seems to be some conflating of Affordable Housing (Big A or subsidized housing) with the issue of general affordability.

We saw this in Eileen Samitz’s comments that we highlighted yesterday.

“Affordable housing,” she said.  “What makes anyone think this is affordable?  What I saw in the newspaper is that it’s really $700 to $800 per bed.  Do the students really think that’s

affordable?  They keep on saying this is affordable housing, this does not seem affordable.  This is exactly what they are complaining about on campus is too expensive.”

She added, for the low income level, the developers are just going to be “bleeding out of the market rates.  Let’s talk about what will the market rate cost.”

I believe she is actually speaking to the market rate units, not the Affordable units.  But it seems important to put the numbers on the table in a clear way.

At the extremely low level the rent is $404 and at the very low it will be $670.  The council repeatedly pointed out that the subsidy for the very low income rentals would be about $100 which would put market rate around $770 – though, as we have pointed out, that has not been determined yet.

As I pointed out yesterday, if the number of units comes online around 2020, it could generate a temporary glut in the market which could actually bring down the costs further.

In 2017, the average apartment according to the BAE report, rented for $1035 for a studio, $1270 for a one bedroom, $1660 for a two-bedroom and up to $2270 for a three-bedroom.  Assuming single occupancy, it would seem that a market rate three-bedroom is renting for just over $750 per person and a market rate two-bedroom for about $830 per person.

So that puts the cost estimate in line with market rate apartments.  A room at West Village is $1050. 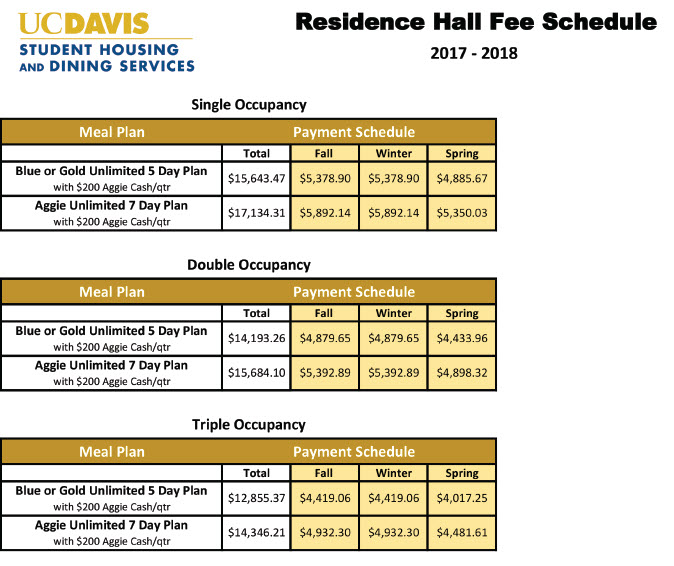 Keep in mind these appear to be based on a nine month (actually slightly less than nine month) schedule.

For single occupancy, the cost of a room and meals is nearly $1800 per month at Tercero.  That goes down to $1626 for double occupancy and $1473 for triple occupancy.

Is any of this really affordable for students?  The affordable housing offered at Nishi is not bad and the market rate seems in line with the cost of housing around the community.

None of these are luxury apartments.  Housing is expensive both on and on campus.  The only way to fix that is by providing enough supply to allow for a real vacancy rate.  We are moving in the right direction there.