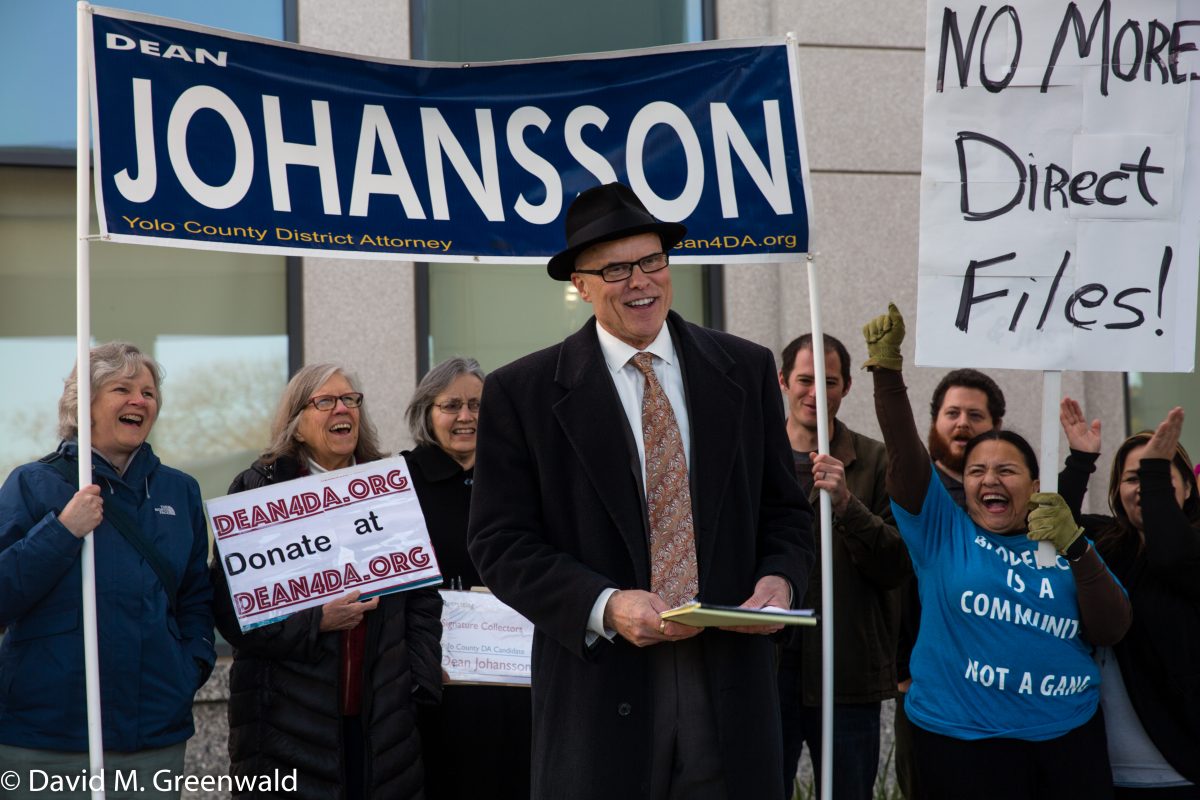 I keep getting asked, can Dean Johansson beat Jeff Reisig?  History runs against Dean Johansson.  This remains the case, despite the fact that on paper Yolo County would seem to be receptive to a more liberal, reform-minded district attorney.

Yolo County in 2012 voted for Barack Obama by a 65-31 margin.  Last November it voted for Hillary Clinton 66.7 percent to 25.3.  You have to go back to 2006, when Yolo County went for Governor Schwarzenegger, to find the last time Yolo County voted as a whole for Republican candidate.  That includes a 53-38 margin for Kamala Harris in 2010 over Republican AG candidate Steve Cooley.

But when it comes to the district attorney, it is a different matter.  The only elected Republican countywide in Yolo County is Jeff Reisig.

Jeff Reisig opposed all of the major criminal justice reforms except for three strikes, where he stayed neutral.

“Prop. 47 was the biggest public safety disaster in the last several decades in my opinion and in most law enforcement officers’ opinions,” Jeff Reisig said in 2016.

And when it comes to a DA, Jeff Reisig is not the anomaly, he is the rule.  So when I’m asked if Dean Johansson can beat Jeff Reisig, it’s a difficult question.

There have been two contested DA’s races in the last 40 years in Yolo County.  In 1984, Dave Henderson faced Bob Black.  On the surface that would seem to be a formidable match – after all, Bob Black became the surprise mayor of Davis as a student and then became a county supervisor.

But he couldn’t beat Dave Henderson – even in Davis, where he lost in a 51-49 split.  Mr. Henderson remained in the office until 2006 when his hand-picked successor Jeff Reisig fought a bitter race against fellow Deputy DA Pat Lenzi.  Ms. Lenzi managed to narrowly win in Davis and West Sacramento, but got blown out in Woodland.

The key to winning in Yolo County is that you have to win Davis by a large enough margin to offset the more conservative rest of the county.

Mr. Johansson is not going to have the resources in terms of money, but he already has a strong organization that can do a lot of the work on the ground.  If they can get students and people of color registered and out to vote, they might have a chance.

The political landscape is such that it might be conducive to a criminal justice reform platform.  We saw what happened with Larry Krasner in Philadelphia.

Jessica Pishko writes, “In the past few years, a new breed of district attorney has risen to power. In places like Chicago, Orlando, and St. Louis, prosecutors have committed to making the American criminal justice system less punitive and more humane.”

She notes that “elected prosecutors have sensed the change in tides and adapted their message even as they’ve refused to scrap their outdated methods. These district attorneys talk about reform and perhaps make incremental changes, but they vehemently resist anything resembling a true overhaul of a broken system.”

And it is not just in Philadelphia.  At the beginning of the year, the American Prospect ran a story, “The New Reformer DAs.”

It notes: “As cities grow more progressive, a new breed of prosecutors are winning office and upending the era of lock-’em-up justice.”

As the article notes: “District Attorneys ‘are in many ways the most important figures in the system,” says David Alan Sklansky, a Stanford law professor who studies DAs. “They are crucial gatekeepers between the police and the courts. They get to decide who gets charged and what they get charged with. They are the ones who recommend sentencing and negotiate plea agreements. And since the vast majority of criminal convictions in this country are the result of plea agreements, they are the ones who are negotiating sentences.”

There are other opportunities as well.  Last week I noticed that none other than Shaun King had followed Mr. Johansson’s Twitter account.  Then came the news this week, “Activist Shaun King Creates New PAC That Plans To Elect Progressive Prosecutors To Help Reform The Justice System.  The prominent activist and writer wants to get ‘reform-minded prosecutors’ on all levels of local government.”

Last Thursday, Mr. King “announced the Real Justice Political Action Committee that will help elect reform-minded prosecutors, sheriffs and judges that will be passionate about reducing the number of nonviolent offenders imprisoned.

“No position in America, no single individual has a bigger impact on the criminal justice system ― including police brutality, but the whole crisis of mass incarceration in general ― than your local district attorney,” King said. “They are the gatekeepers of America’s justice system.”

According to a release: “The Real Justice PAC has set objectives that will make this a reality. The first is to elect prosecutors who will actively push back against discriminatory policing, limit and/or eliminate money bail that has been proven to keep poor people in jail longer, and help roll back other practices that lead to mass incarceration.

“That’s a smarter way and a safer way for us to make an assessment,” King said. “Many people are running under the guise of being Democrats in these DA races and that has next to no value.

“All of this will be achieved with enthusiastic field organizing, an increased social media presence, small-dollar fundraising, candidate recruitment that will prevent an estimated 84 percent of county prosecutors running unopposed and a true commitment to criminal justice reform.

“If we are perpetually on the outside, our message might be right, but it won’t have the effectiveness that it deserves,” he said. “We can mobilize in some really amazing ways locally and just get these races in the front of the mind for people so that they understand it’s everything.”

But can Mr. Johansson knock off the three-term incumbent?  It is definitely a long shot, but you never know. 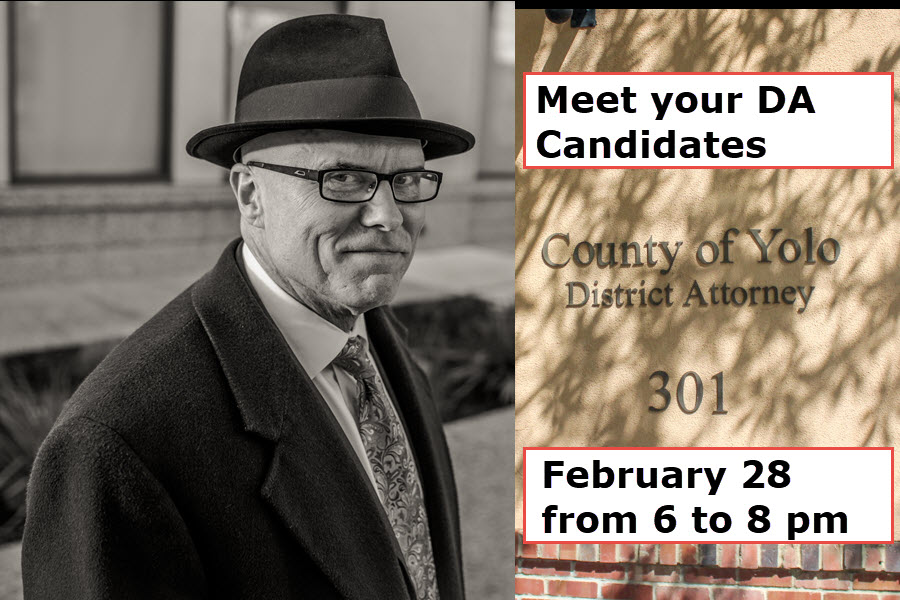 On February 28, the voters will have a chance to meet Dean Johansson.

The Vanguard is sponsoring a meet the candidates event. Both Jeff Reisig and Dean Johansson were invited. (Mr. Johansson confirmed, Mr. Reisig did not respond).

Dean Johansson will speak for about 15 to 20 minutes and take questions from the audience.

The free event will be held at Bryte Cafe in West Sacramento located at 637 Todhunter Ave.

Share:
Tags:Criminal Justice ReformDean JohanssonJeff ReisigShaun KingYolo County District Attorney
Previous : No Such Thing as ‘Consensual Sex’ When a Person Is in Police Custody
Next : Sunday Commentary: There Are No Panaceas for Housing, but Status Quo Is Not Working