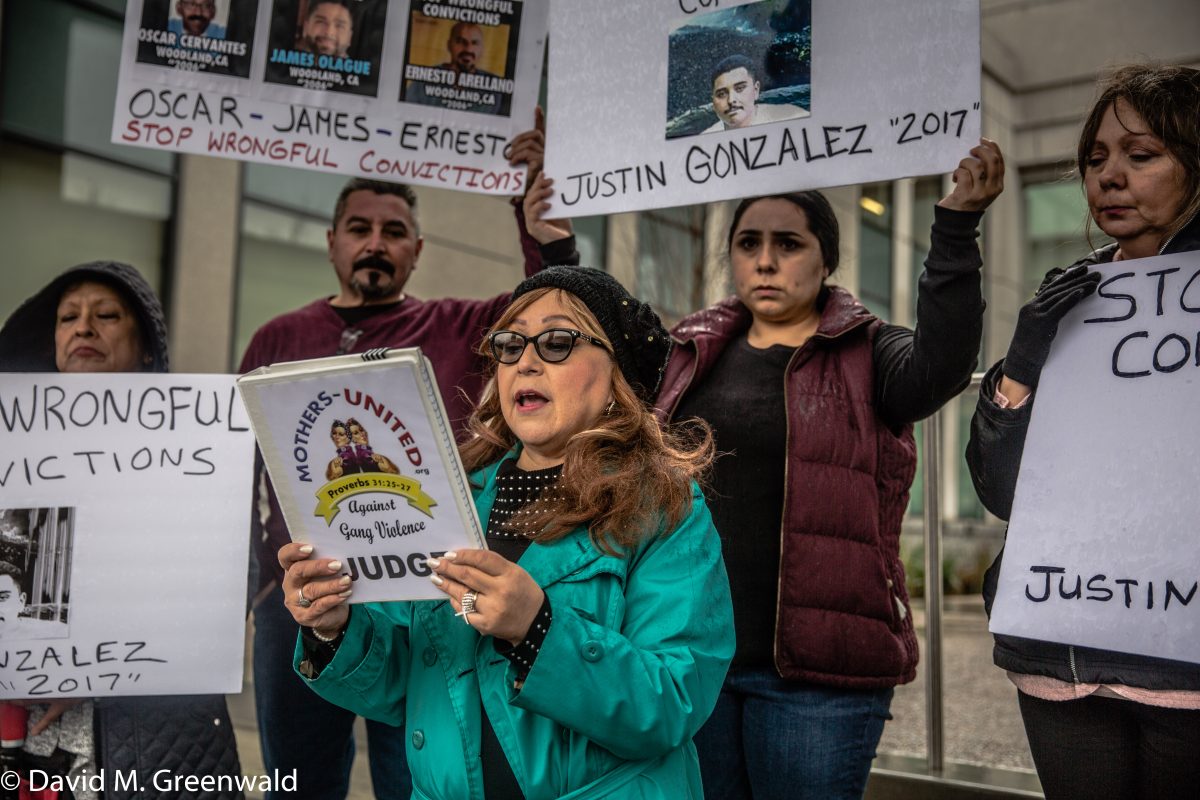 In the summer of 2009, the Vanguard still only a few years old, I got a call from a family to come out and meet with them at their home in Carmichael.  Little did I realize at the time that this was one of those calls that would change my life.  Their loved one had just been convicted of raping their adoptive daughter and was about to be sentenced.

They were convinced he was innocent, and I was skeptical but listening.  After meeting with them, I went to the sentencing hearing and was stunned as Judge Timothy Fall pronounced a 378-year sentence in the case.  The man’s name was Ajay Dev – I have never viewed the court system the same after that experience regarding a man I have come to believe is completely innocent.

On Friday when Judge Daniel Maguire sentenced Justin Gonzalez to 70 years to life, I believe his case marks just the latest in a string of wrongful convictions in Yolo County – many of which we have covered from start to finish.

The question everyone invariably asks is – how does this happen?

In the nearly nine years that have passed in that time, I have come to study the causes of wrongful convictions.  A 2010 report found that in 225 DNA exonerations, the claim of ineffective assistance of counsel was made 21 percent of the time.

That is not the case here.  Defense attorney Keith Staten, as Judge Maguire pointed out in dismissing accusations of prosecutorial misconduct and discovery violations, thoroughly discredited the key witness Rudy Aradoz on the stand.  As the judge pointed out, by the time Mr. Staten was finished cross-examining the defendant-turned-key witness for the prosecution, she practically admitted that she was a liar.

Indeed, one of the reasons Judge Maguire denied the motion for the new trial – even though he acknowledged he was troubled he was holding a CD with a recording that the defense did not have access to during the trial – is that he did not believe that it would have changed the verdict.

There are three key factors of wrongful convictions which did play a huge role in this case.  The first is eyewitness error.

Ponce Perez, according to Mr. Staten in his December interview with the Vanguard, “cannot identify my guy in a field show up, but she identifies Velazquez and the girls in the van. Can’t identify

He said, “It’s not until court where she stands up and wants to point him out.”

The second problem is what we will call an informant.  Basically, Ruby Aradoz is on the hook for murder.  In fact, she is the one that caused this entire situation to happen.  But she gets offered complete immunity and a dropping of all charges in exchange for her testimony.

The problem was she was simply not credible.  She gave an initial statement to police that she saw nothing.  Then there was a second statement on September 21, 2016, in which she apparently told investigators she saw a knife.

When she testified at the Grand Jury, she did not testify that she saw Mr. Gonzalez with a knife.

At the trial, Deputy DA Michael Vroman informed Mr. Staten that she was going to testify.  Apparently they interviewed her again from 1 to 1:30 pm.  At that time, Mr. Vroman informed the defense her testimony would be consistent with previous statements.

Mr. Staten took that to mean she was going to testify to what she said at the Grand Jury hearing.  As he pointed out: “My cross-examination was done without knowledge of any new statement.”

Judge Maguire questioned Mr. Vroman as to why he wasn’t required to turn over a copy of the recorded statement under Penal Code section 1054.1.  Mr. Vroman stated that  under 1054.1 there is the stipulation about “if it is in the possession of the prosecuting attorney or if the prosecuting attorney knows it to be in the possession of the investigating agencies.”

He told the judge, “I did not know it was recorded.”

Mr. Staten would push back that Mr. Pimentel, the investigator, was a member of the prosecution team and sat at the table with the prosecuting attorneys.  He argued that this meant that being in his possession was tantamount to possession by the attorney himself.

In this case, the judge accepted the representation of Mr. Vroman that he did not know, and therefore ruled there was no discovery violation.

Judge Maguire, in ruling as he did, came to the conclusion that, while he was troubled that the defense did not have access to the recording of the interview, he believed it would not have changed the verdict had they done so.

My question here would be: how does he know?  Shouldn’t the defense get the benefit of the doubt here, especially given that the sentence of 70 to life is effectively life without parole?

I’m further troubled by this – in making his ruling, the judge suggested there was other evidence that Justin Gonzalez had a knife.  But there wasn’t.  There was no knife recovered with Justin Gonzalez’s DNA on it.  They didn’t find blood or other physical evidence to tie Mr. Gonzalez to the crime or crime scene.

The video evidence shows Mr. Gonzalez approaching the scene well after everyone else had already passed.

Rudy Aradoz was the only one to say she saw him with a knife.

The judge is effectively arguing that the violation was harmless because the witness was not credible, and yet she was the only evidence that existed – which meant that the jury had to find that information credible.

Judge Maguire is right that the defense was able to effectively impeach the credibility of the witness, but that makes the jury verdict all the more perplexing.

In the end, the DA had done just enough to not get the verdict thrown out by the trial court, but whether it survives on appeal will be another question.  There is little doubt in my mind that Justin Gonzalez is innocent of those charges.  And reading the tea leaves, I think Judge Maguire felt his hands were tied legally but he had his own doubts.

What I found interesting is that, several weeks ago, Judge David Rosenberg in handing down a life without parole sentence to Robert Hodges called the murders depraved and said, “God may forgive you, but this court does not.”  Judge Maguire pointed out two weeks ago, with Gonzalez’s co-defendant Alexis Velasquez, that the victim here (Ronald Antonio) had literally given Ms. Aradoz the shirt off his back before he was mistakenly murdered.

But in pronouncing the sentence of 70 to life as required by statute, Judge Maguire gave no such admonishment to Justin Gonzalez.  Is that because he himself has doubts about the verdict?

Then there is Justin Gonzalez’s statement himself, which I found interesting because he was able to proclaim his innocence, while at the same time offer condolences to the victim’s family.

Justin Gonzalez in addressing the court offered his “deepest condolences” to the family of the victim Ronald Antonio, whom he called an innocent victim.  But he said, “I had no part in it.”

He blamed his circumstances on his co-defendant Alexis Velazquez, who two weeks ago received life without parole for his part in the murder.  He said that Mr. Velazquez could have cleared his name but failed to do so out of arrogance that he himself would walk away from the crime.

So here we go again, another innocent man is going to spend a significant portion of his life in prison, and the sad thing is that I believe a lot of people know it and were unwilling or unable to stop it.

2 thoughts on “Sunday Commentary: This Is What a Wrongful Conviction Looks Like”