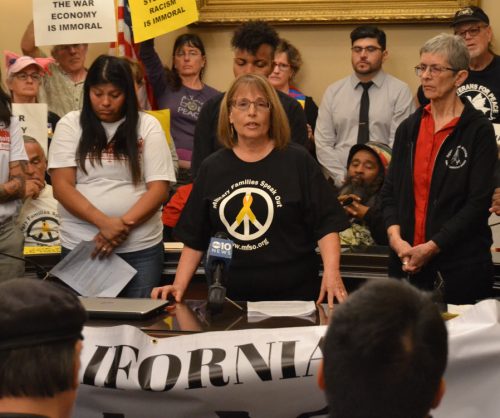 California’s jails and courtrooms may soon be full if the moral outrage of Martin Luther King Jr.’s original Poor People’s Campaign is realized.

In a small jam-packed State Capitol meeting room with more than 100 people of all colors, ages, races and political persuasion, a new, but old, movement served notice this week to state lawmakers here – and similar legislative bodies in state capitals and cities all over the U.S. – that they are willing to populate the nation’s jails to “save the soul of our country.”

The “Poor People’s Campaign” announced under no uncertain terms they will risk arrest in great numbers in the footsteps of MLK Jr. to end “policies that promote systemic racism, poverty, the war economy and ecological devastation threatening our democracy an decaying out national morality.”

Those arrests could start Mother’s Day in California – or earlier, according to a letter from the campaign and its “national call for moral revival” delivered to Senate President Pro Tem Kevin de León and Speaker of the Assembly Anthony Rendon at the end of a rally and march through the halls of the Capitol this week.

Neither lawmaker accepted the letter or commented.

The campaign demanded leaders “adopt an agenda that lifts up poor and disenfranchised people,” and accused them of “failing to address the enmeshed evils of systemic racism, poverty, the war economy, ecological devastation and America’s distorted national morality.”

The promised six weeks of direct action this Spring was predicted by organizers to be “one of the of the largest waves of nonviolent civil disobedience in U.S. history.”

Judging by the energy in the event, it seemed more than believable that this “revival” could re-create King’s original Poor People’s Campaign, which ended with his assassination. Organizers said

they will travel throughout the U.S. – from the Deep South to the Rust Belt to the Far West – to recruit “the poor and disenfranchised” to join the campaign.

Speakers suggested “so-called Christian nationalism” was a “threat” to a “moral agenda” which will “unite our country from the bottom up.”

“We have come here (the Capitol) to say clearly that politics that ignores the poor has gone on far too long…we will not be silent anymore,” the letter to the Legislature’s leaders said, adding, “We…demand you uphold the oath you have taken to represent us on a moral agenda that lifts up the common good and general welfare.”

The letter said: “We are prepared to take direct action and engage in nonviolent civil disobedience to insist that Republicans, Democrats and Independents develop serious proposals to address such an agenda.”

The demand called for a “change of course,” and criticized “the immorality of an economy that leaves out the poor…(and) consistently ignores the 140 million poor and low-income people in America.”

Noting that Congress passed a tax bill “that is an obscene transfer of wealth to the richest among us,” the campaign cited a “60 percent increase in people living in poverty over the last 50 years, while the top one percent share of income nearly doubled.”

Speakers also listed 23 states that have passed “racist voter suppression laws since 2010,” federal prison spending that has “increased tenfold to $7.5 billion a year” and immigration enforcement and deportations” budget to $17 billion. Meanwhile, the campaign said U.S. military spending eats up 53 cents out of every discretionary tax dollar.

“Poor people of all races are being ignored in our political conversation and dismissed in our political decisions…programs to sustain the poor are being cut, racist voter suppression laws undermine access to the ballot box and DACA recipients are treated as political pawns,” said several speakers.

“We must hold this nation to its promissory note…we must take this walk because without struggle there is no progress,” said Brother Kevin Carter of the Sacramento Poor People’s Campaign.

Lauri Loving of Davis and Military Families Speak Out/Veterans for Peace decried the “spiritual death” of the U.S. and its military incursions all over the planet. “It’s time to bring the troops back and take of them,” said Loving, whose son suffers from PTSD and other physical ailments because of his deployment in Iraq.

She criticized the “economic draft” that preys on young men and women in high school to use as “cannon fodder” in “unpopular, unwinnable wars.”

Another Yolo County resident, Steven Payan of Woodland, reminded listeners that “in the last 40 years we have killed off 60 percent of the world’s species…that is ecocide, ecological devastation.

“We need to ignite people and end poverty and environmental racism. Those in power can’t see past the next election but most people can’t see past their last paycheck or their last meal. We need to rise up and fight a system that has failed us… pesticides are in our food, poisoning farmworkers, people can’t drink the water in Flint (MI) and Nestle says water is not a human right,” said Payan.

The theme was picked up by Kait Ziegler of Los Angeles, who pledged to “save the soul of this country” by “lighting a flame,” noting “none of us are free until all of us are free.”

Bay Area civil rights lawyer Anthony Prince said the U.S. “has lost its moral compass. But only in darkness can you see the stars,” quoting MLK Jr.  “We now turn to the people’s court of last resort…I now, as an attorney, will practice before the bar of history (to) bend the arc toward justice.”

“Too many people in California are getting pushed out of where they live because of rent increases. It’s eviction for profit. It’s time to join with people who are fighting against other injustices to call on our elected officials to support a moral agenda, not a big-money agenda,” said Marie Camacho, a 31-year-old, single working mom. Camacho said the landlord of her Sacramento area apartment, where she lives with her four-year-old son, filed an eviction notice against her to make room for someone who would pay a much, much higher rent.

Share:
Tags:Poor Person's Campaign
Previous : He Stole $5 and Cologne. Bail was Set at $350,000
Next : Thomas Cahill’s Letter to Council

2 thoughts on “‘Wave’ of Arrests in California and U.S. Promised by Poor People’s Campaign, Citing Fight Against”