In general, elections are not won and lost on the ballot arguments, but the Nishi ones are somewhat interesting because there is a good amount of disagreement over core contentions.

I find it interesting that the core issue of the Yes on Measure J ballot argument drew very little attention.  The ballot measure is likely to rise or fall on both the degree to which the voting public believes that we have a student housing crisis, and also over whether the city or the campus is the entity that should deal with that housing crisis.

Being that as it is, I would say I am surprised that the ballot argument in favor of Measure J only briefly mentions the “affordable housing program aiding hundreds of disadvantaged students every year.”  The lack of affordable housing doomed the previous Nishi proposal and I would have emphasized it.

The argument plays up the location for student housing, environmental sustainability, and the traffic impacts.

The most controversial portion of the argument is probably the one that is least important.

The proponents argue: “This project will generate a one-time benefit of over $11 million in revenue for the City of Davis. Money that can be used for parks, roads and other city needs. Davis

The safer ground would have been to have mentioned that the Finance and Budget Commission voted 5-2 that they “generally concur with the estimate that annual ongoing revenues and costs for the city from the project would be modestly net positive over time.”

Going beyond that, they get into subjective analysis land.  Generally speaking, they are accurate: “This project will generate a one-time benefit of over $11 million in revenue for the City of Davis.”  Some will point out that these largely impact fees are reimbursing costs, others will argue that the language is technically accurate.

We can perhaps quibble as to how much of a benefit that actually is versus reimbursing for costs, but that’s a political debate.

The one area of real question is this one: “The City also estimates almost $2.5 million in additional property taxes every year.”

That statement appears to be misleading at best and inaccurate at worst.  It is not clear where that number comes from.  One possibility as we looked at 15 years of projected property tax revenue for the city, which appear to range from $34,000 to about $228,000, is that $2.5 million in property taxes is the sum total of those 15 years.  The other possibility mentioned to the Vanguard is that $2.5 million represents the full property tax generated at buildout, but the city only receives less than one-tenth of that.

Either way, not accurate as worded and perhaps flat out wrong.    A more accurate statement is that in addition to the one-time $11 million for the city and $2 million for DJUSD is ongoing property tax revenue.

But, really, this project is not about generating revenue for the city, it is about providing housing for the students, therefore, I would have stuck with the slightly net fiscal positive over time point and moved on to more important issues.

Now let us look at the arguments against Measure J.  The first one I find most interesting is that the argument here is not UC Davis should provide the housing, it is really about the air quality being adjacent to the freeway.  They eventually conclude: “Safer student housing can be offered on the UCD campus and elsewhere.”

Their core argument is: “Given the initial, limited air quality measurements, three years ago air quality experts urged the developers to perform measurements at the Nishi site itself over a longer time. Yet, they chose not to.”

Given that the project has dealt with the issues of affordable housing and traffic impacts, this is their strongest remaining argument.  Although as I pointed out yesterday, the need for additional studies at this point is questionable. 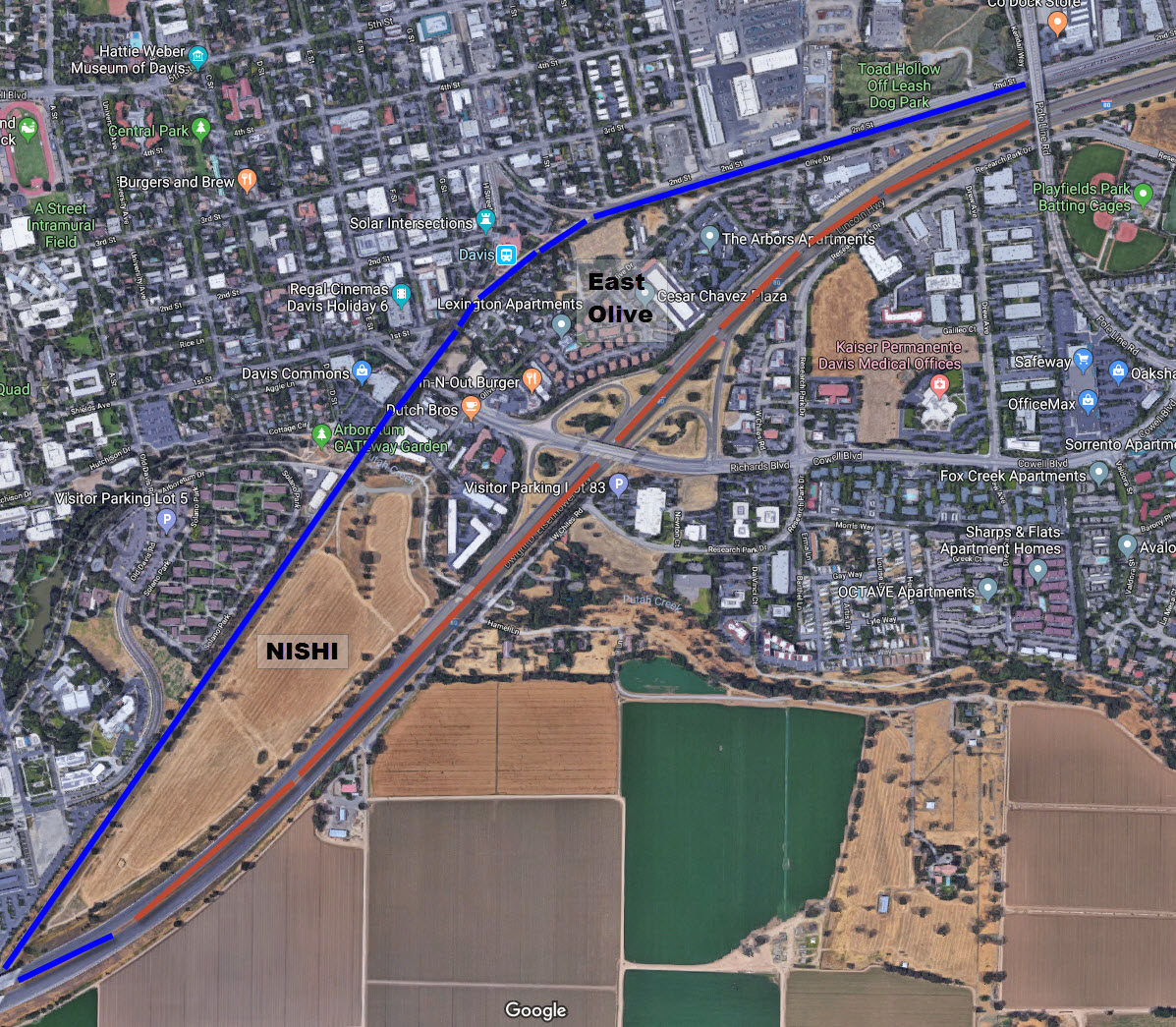 The reality is that there is not much difference between the existing inhabited locations along East Olive Drive and the uninhabited locations at Nishi.  It was pointed out that Dr. Cahill himself identified 10 characteristics that made Nishi problematic, and nine of them are shared by the area at East Olive.

The elevated portion of I-80 only encompasses a small portion of the Nishi property, and to argue that this makes the difference between habitability and inhabitability, I think, is questionable at best.

Dr. Tia Will pointed out to me that, despite more than 50 years of inhabitation at East Olive, there is no evidence of increased incidents of respiratory problems.

She wrote, “Based on the information provided by the county epidemiologist…. (t)here is no evidence of increased health care impacts along the I-80 corridor from Vacaville to West Sacramento. This would imply that the risk along this corridor is not increased over that of the other neighborhoods in Davis.”

Moreover, Dr. Thomas Cahill himself wrote to me that he is opposed to Nishi regardless of the air quality issues.  He wrote, “Air quality issues aside, the property is far too valuable for just student housing.”  Dr. Cahill had no problem with Lincoln40 and its nearly identical conditions and no problem with New Harmony, it was simply Nishi that he believes is problematic.

Aside from the air quality issue, the project opponents make some claims that deserve scrutiny.

First, “This project will increase traffic congestion on Old Davis Road and First Street to Richards, which is already bottlenecked many times daily.”

There is no traffic analysis here for them to point to.  This is sheer conjecture on their part.  There will be 700 parking spaces, but most of the traffic will not occur when those routes are congested.  Why?  Because the population that resides at Nishi will not drive to campus to attend classes.

As we have noted in the travel survey, of people living less than a mile from campus, less than 5 percent drive to campus.  Why drive and incur traffic impacts, parking fees, and other inconvenience when you are within biking and walking distance?

The numbers bear this out.

This would seem to be a self-defeating argument.

Finally, they rely on a minority opinion to determine: “The project design will saddle the city with more costs than revenues. That means the rest of the community will subsidize the financial shortfall of this project, imposing costs onto our community.”

We have discussed this in detail elsewhere, but, as I wrote recently, this is based on flawed and unrealistic assumptions on costs.

For instance, it is unlikely that an apartment complex with 2000 students would necessitate hiring additional police and fire, and yet the assumptions that show a net fiscal loss assume costs for police and fire which could only occur because of additional hires.

The key point I have made is that if Nishi ends up being a fiscal drain on the city, the city has a lot more problems than just Nishi.  That is not to discount the city’s fiscal challenges, but over time the Leland model on financing is far more concerned about unfunded infrastructure and retirement liabilities – none of which are really impacted by this development, even in the 15-year time horizon that we’ve analyzed.

44 thoughts on “Analysis: A Glance at the Nishi Ballot Arguments”