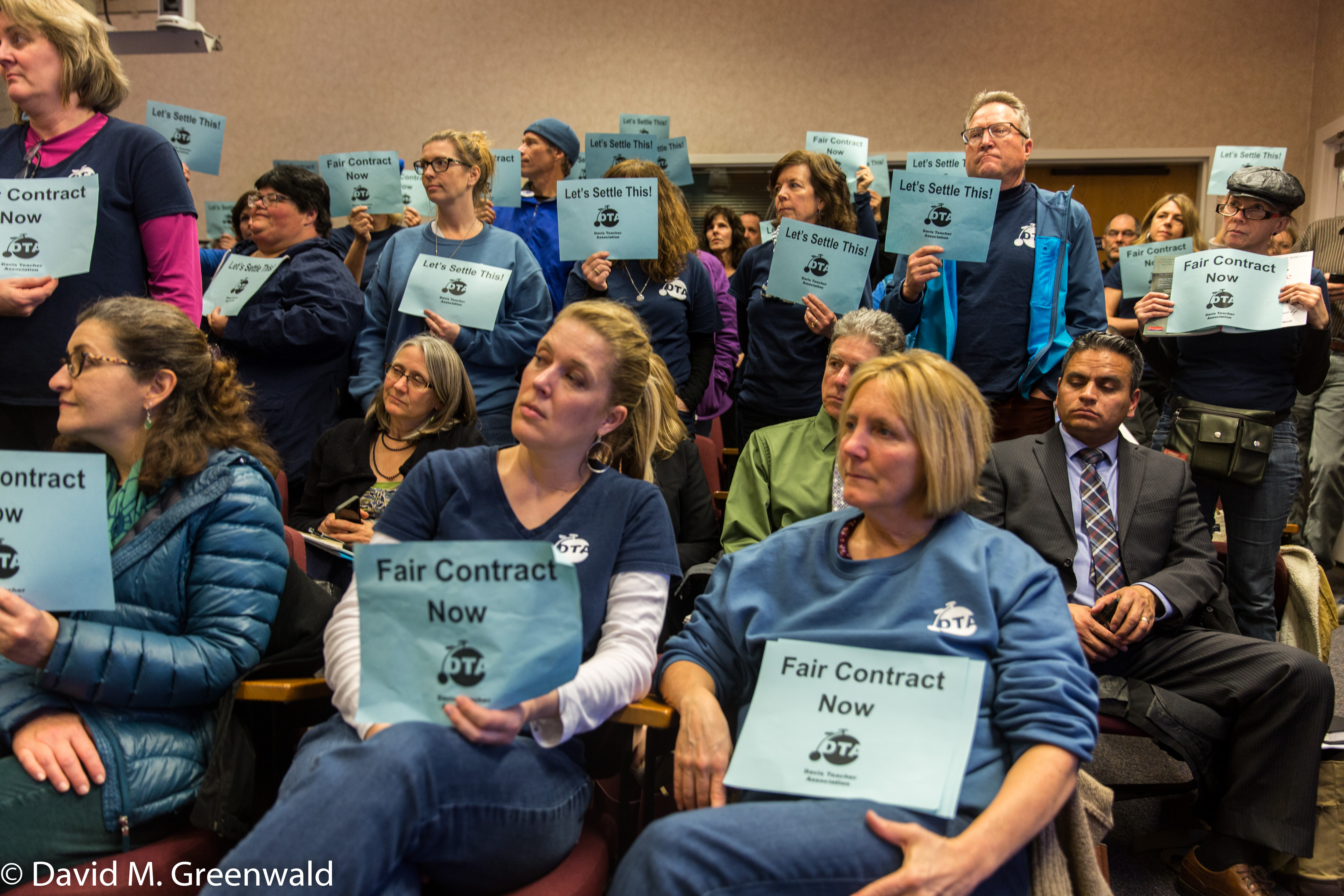 The teacher  compensation gap is real and many teachers, particularly the younger and least experienced teachers, are really disadvantaged by it.  But the district’s data show that this gap is not uniform across the pay scale and that the entry level teachers are much more heavily disadvantaged than the most experienced teachers who are at the top end of the pay scale.

However, the numbers for the most part improve (except, strangely, for Steps 11 to 15) as you go up the pay scale.

The district’s approach from our understanding is to attempt to reduce if not eliminate the compensation gap across the board.  But that would require unequal pay increases for the teachers – something that DTA spoke out against on Thursday.

The teacher compensation gap exists all the way through the pay scale, but it is far worse at the lower end.  The teachers, it would seem, are not wanting to simply adjust the pay scale so that the new teachers are given a larger pay increase in order to close that gap while more experienced teachers, who are closer to begin with, get less of a pay increase.

This becomes clear in the message sent by a number of teachers including DTA President Dianna Huculak on Thursday.  She said that “we have been seeking significant but above all fair increases for ALL of our members, not just small sub groups.

“The huge disparity in the offers made by the district for people – perhaps 7 percent for one member while 1.5 percent for the person working next to them – is unacceptable.,” she said.

For the most part, contract negotiations are confidential, so we can only infer from the conversation what might be going on.  From her comments, and those of others, it would appear that the district’s offer is for a big increase for new teachers with a smaller increase for more experienced teachers.

The DTA is rejecting that.  Ms. Huculak says, “The compensation gap is profound at all levels of the salary schedule. It impacts not just beginning teachers, but also those teachers who have dedicated their professional lives to working in this district.”

The next part of the message was delivered later in the evening by former DTA President Blair Howard.  He said, “So as you consider this parcel tax, consider that in order for it to get passed, it will need to inspire, it will need to do more than just kind of sort of keep up, and it will really need to meet the needs of the people who are here now because I’m not certain the prospective teacher who is in another community is going to come over to Davis and work on the passage of a parcel tax, so they can come to work in Davis.”

The message here appears to be not that the teachers will not support a parcel tax or will not work for the parcel tax.  Instead, it is a bit more complicated.  What they want is what they consider a fair increase for all of their members.  They do not want a situation where the least experienced take a 7 percent pay increase, but the most experienced only get 1.5 percent.

What they want is a pay increase across the board and they are warning that an unequal pay increase will not inspire their experienced members to work.  And that newly hired people, who are not in the district right now, are not going to come from out of town to do that work.

Dianna Huculak, in an email to the Vanguard on Monday, clarified their position: “DTA recognizes that there are significant wage gaps at all levels of the salary schedule.  DTA also has an interest (in) ameliorating these differences so that we are able to, not only attract highly qualified teachers, but also retain our colleagues to promote school stability, sustainability and student success.”

She added, “Therefore, we are seeking a fair contract that benefits all of our members.”