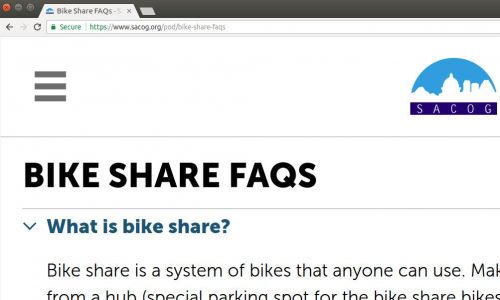 Reasonable Inclusivity, and a Peer-Based Independent Mobility Threshold? Nope, Bike Share in Davis Is Not for Everyone.

The wait is over and the regional JUMP bikeshare system gets introduced to Davis and UC Davis this week. It used to be called Social Bicycles, but now the name has changed, and – much more than that – the bikes are all going to be electric-assist, but you’ll still need to pedal. The bikes are called pedelecs, and by California law they are Type 1 electric bicycles. This type of bike gives a boost up to 20 mph (normal urban bicycle cruising speed is about 13 mph). You can start riding the bikes in May. The system will also be expanding from a small pilot in Sacramento and West Sacramento. By the end of summer there’ll be about 700 bikes total by summer in all three cities (and UC Davis campus).

“But everyone in Davis has a bike!” proclaims the chorus. About a week ago in a discussion on the Davis Bike Club listserve in response to this column in the Davis Enterprise, I mentioned many ways  that bike share can complement or supplement bicycle ownership. To help us understand it further, the system’s outreach crew – from SACOG (Sacramento Area Council of Governments), JUMP, and other consultants – were at the Memorial Union yesterday, and today they’ll be at Farmers’ Market in Central Park.

I encourage you to stop by their stand and ask questions…  but from the perspective – if necessary use your imagination and act the part – that you’re over 210 lbs and/or under 18 years of age: If the outreach crew is honest they’ll say “Sorry, this system is not for you. Not everyone can use bike share. The system is a partnership between SACOG and JUMP, and we had to make some

compromises. Now, please move aside so the fit adult behind you can be helped.”

That’s a sort of summary of what I’ve been told for more than year and  just a slightly more dramatic version than what we were told at the last Bicycling, Transportation and Street Safety Commission (BTSSC) meeting in early February, and it seems to represent my so far unanswered query I made of JUMP over a month ago. For their part, SACOG’s staff members and City Councilmembers such as Lucas Frerichs – who was on the bike share committee and is on the board of SACOG – say that they’re discussing the issues with JUMP, and Councilmember Frerichs told me via social media shortly after the BTSSC meeting that they were going to do something about the weight issue. But nothing’s changed in the JUMP user agreement since January – the bikes are currently operating in San Francisco and Washington, D.C. (Still, I respect and trust Councilmember Frerichs and am confident that something will be changed with the weight issue – other systems have a limit of about 260 to 275 lbs., and many have none at all, including in e.g. hilly Santa Monica, where JUMP provides non-electric assist bikes – here’s the user agreement). Of course no one is weighed when they sign up, but if there’s a problem, a crash, etc… a member’s weight could come into play.)

You’d agree that the City of Davis really wants everyone to ride bikes, right? Including youth, so that they develop a healthy and social lifestyle?  The Transportation Element in the City’s General Plan specifically mentions the “E” for Equity, and it’s obviously a key part of the 2014 Davis Bicycle Action Plan. Other foundational documents, for example in Davis: the resolution that created our Human Relations Commission, to the City’s “Principles of One Community” and the region: “SACOG does not discriminate on the basis of race, color, sex, creed, religion, national origin, age, marital status, ancestry, medical condition, disability, sexual orientation or gender identity in conducting its business.” These all support what I call  “reasonable inclusivity.”

Reasonable inclusivity in this specific context indicates that minors who are tall enough to operate JUMP bikes (nearly everyone at the beginning of 9th grade) should be able to use them. California like all US states allows 16-year-olds to drive and may be able to use bike share, also at 16, including systems supplied by JUMP (and there’s no formal difference between a 16- and a 13- or 14-year-old). Thirteen-year-olds in the same region – and more or less along the same commuter rail service – in Alameda, CA, can currently use LimeBike bikeshare. Austin, Texas, too! As far as real risk goes, I think that a young teen in Davis will be at least as proficient in riding an electric assist bike as someone older who has been (re-)introduced to cycling, via JUMP.

Certainly this is not “discrimination,” per se, e.g. under Federal law, but in my opinion it clearly violates the goals and principles of the City and region. I was appointed to the BTSSC in December 2017 to support the goals of the City. These goals include inclusivity in mobility and active transportation.

Inclusivity by definition requires a point of entry. It can be at birth, when we are accepted into a Universe of beautiful breathing mammals, or age 35, when USA-born citizens can become president of the country. When the current regional pilot for bike share – it started in May 2017 – was organized over a year ago, it seemed to make sense to create a peer-based threshold for bike share, in other words one not based simply on age, like a driver’s license, or the ability to purchase an assault rifle. Children spend more time with classmates than with anyone else, but their friends in the same grade might a year younger and older than them. Entry based on age would separate peers from each other. (Doesn’t this create some thorny social issues when only some but not all persons in a peer group can give up their penny-farthing for a Prius?)

The minimum height required to ride the bikes is five feet. As nearly all boys and girls are five feet tall by the time they are 14, the age of most when they start ninth grade, perhaps ninth grade should be the entrance of inclusivity, yes? Significantly, most high schools – no, not in Davis – are grades 9 to 12. So this became an earlier proposal – and one that applies directly to JUMP’s stubborn ageism: that from the first day of ninth grade, bike share membership should be possible (providing that the ninth grader’s parent or guardian agrees).

But all journeys are multi-modal, right? Sure, this includes walking to the car, but what I have in mind is the bicycle plus the train, a popular combination that our City – as well as its partners in the great region such as Capitol Corridor – supports very much. (In the Netherlands something like 40% of people arrive at the train station by bike, and the main bike share system is national and owned by the state railway.) What use is access to a shared bike at ninth grade when it’s not possible to use the shared train without adult supervision, as is the case with Amtrak, which makes the rules for the Capitol Corridor trains it operates. Yes, one has to be 16 to ride alone, without permission – and 18 to accompany a friend or sibling under 16. (Consider that a 17-year-old who’s been driving for a year can fill their parents’ car with their peers, and drive to Davis High School and park for free, but cannot use their own or a parents’ bike share membership to use a bike, or that they could drive friends to a bike share dock, and but not be able to use the bikes.)

From this follows a more comprehensive plan: Independent mobility from the first day of ninth grade:

2. Use of any bike share system in which they are generally able to use the bike (height, skills) and with no reference specifically to age;

3. No requirement for use of bicycle helmets (except for organized sporting and other events that typically require a helmet for everyone);

4. An at least 67% discount for all public transport 24/7/365 including bike share and Amtrak California services – for Amtrak California based on half of the per ticket discount in an Amtrak ten-pack of tickets – till the last day of the summer one year after graduating from high school; and

5. Ability to use carshare from the first day of 12th grade, as long as they’ve had a license for one-year.

This “Ninth” Strategy is discussed in more detail at this Google Docs link. It’s very much a work-in-progress and is set up to take your comments – I want to create this strategy with help of my fellow Davisites and neighbors in the region, and especially those in 8th grade and up who want to help with what is hopefully a short-term goal to help them become fully independent in mobility, with all the benefits that can create. It’s about driving, too – it’s always about the right tool for the job – but at least two years before it’s possible to get a license to drive.

Why does JUMP have the age 18 limit? It’s obviously about liability from their perspective, but JUMP has operations where kids younger than 18 can participate, such as in Breeze in Santa Monica, or Biketown in Portland. Is it about risk? Perhaps… sure… whatever… isn’t it risky to not let children become as independent as possible as early as possible? I suggest you ask SACOG why they created a contract that lets JUMP set the age – and weight – limits, and ask JUMP what they have against kids. Because their policy is against kids.

The good news for kids in the region is that LimeBike will operate in Folsom and Rancho Cordova – these towns don’t use a bicycle as their symbol, but kids in these towns will be able to use bike share five years before their peers in Davis, Sacramento and West Sacramento.

***
Todd Edelman is a member of the Bicycling, Transportation and Street Safety Commission of the City of Davis, but the views expressed here are his own. Todd currently lives with four roommates in a rented house in the Birch neighborhood; he moved to Davis in August 2016.

16 thoughts on “Bike Share in Davis Is Not for Everyone”