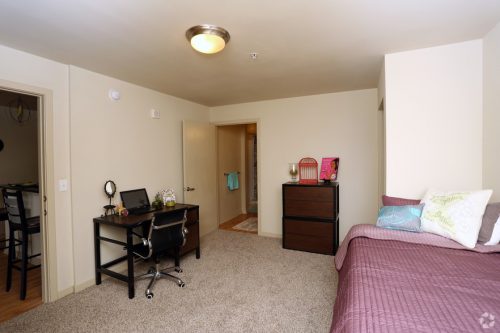 This weekend, I got a text message from a longtime friend, and he said that he didn’t like these bed rentals.  I never got an answer as to why.

As Eileen Samitz put it recently, “Lincoln40 is a mega-dorm with predominately (71%) 4- and 5-bedroom apartment suites, with a bathroom per bedroom and door lock per bedroom in enormous apartment ‘suites’ roughly 1,500 -1,700 sq. ft.. These are designed specifically for students and are a rent by the bed format charging a flat rent per month.”

She added, “Furthermore, these mega-dorm bedrooms are not affordable for students. The average cost at Lincoln40 for the market rate bed is $1,000 per month!”

However, the Bay Area economic report commissioned by UC Davis found that the average bed in Davis rented for $875 and $900 per bed.  Lincoln40 is only slightly higher than that and, when you factor in that the apartment complex includes the cost of water, electricity, garbage, sewer, cable and internet, the students are basically paying a flat rate for everything except for food.

A tripled-up room at UC Davis costs $950 per month and that doesn’t include the meal plan.  Our analysis based on data from UC Davis and the UC system last month found that the cost of housing off

campus is roughly 60 percent lower than the cost of housing on campus.

But I want to focus here on the arguments against bed leases – of which I have not seen any.  The opposition here puzzles me.

In my contacts with students, from what I have seen most prefer the rent-by-bed solution.  Why?  For one thing, it allows each renter to be responsible for their own lease.  For another, if there is a problem, the renter can leave more easily.

ASUCD Senator Alisha Hacker made several important points in her weekend op-ed in the local paper.

She writes, “By-the-bed rents generally include all amenities — even amenities like WiFi and study space. There is no squabbling with roommates over who pays for water and who pays for internet. It’s all built in and one transaction at the end of each month covers all of our living expenses except for food. Additionally, units in by-the-bed leased apartment complexes are also generally furnished. When you take all of this into consideration, a lot of value is embedded into by-the-bed rent.”

If you think about rent – let’s say it’s an average of $875 a month.  But then in some places you would have to pay for electricity, for cable, for internet, and most apartments don’t have individual meters for water (note that an argument against mega-dorms is water conservation, but apartments don’t have individual water meters whether they are mega-dorms or not).  That could be another $100, maybe more, when you factor in all the added cost.

Then you have furnishing, and that’s additional one-time costs that students don’t have to worry about.

This is a key point that I think Ms. Samitz and others are missing on costs.  Rent may be slightly above the average for Davis, but you have to look at what that rent pays for.

Ms. Hacker also makes the key point on liability.  She writes: “In addition to being inclusive of amenities, by-the-bed rent lessens a tenant’s liability. If a roommate is late paying rent, or bails altogether, no one else is penalized. Additionally, roommates don’t have to fight over which one of them or whose parent takes the responsibility of being a cosigner.”

Ms. Hacker also points out that “the location of Lincoln40 is optimal for students and young professionals. We do not want the added expense of a car if we can avoid it. With less than a three-quarter-mile walk to the UC Davis campus or downtown, and close proximity to transit and Amtrak, we could not ask for a better location.”

That is a huge cost savings that the opposition is not factoring in.

We understand the argument put forward that the university must supply more in the way of housing on campus.  The city really doesn’t have the capacity to add 14,000 student beds very easily.  But frankly, the city is going to add 4000 to 5000 without breaking much of a sweat.  The university has promised 8500 beds, and that will go a long way toward solving the crisis.

Yesterday a commenter said, “David is ignoring the obvious solution for students, which is on-campus housing.”

Not at all.  This publication has addressed the issue many times.  The university is planning to build 8500 beds in the next ten years. Adding additional off-campus housing will help alleviate the housing crunch as well as reduce traffic impacts.

At the same time, I will point out that on-campus housing remains a more expensive option than off-campus housing.  We complain about Lincoln40 being $1000 per bed.  Here is a key apples to apples comparison: Lincoln40 is actually $850 for a double room versus $950 for a triple university room.  That is before we get to meal plans.

Remember that data is over a nine-month period.  That comes to nearly $1800 per month on campus.  We can talk about on-campus housing as being ideal all we want, but the reality is that students need capacity and housing, and Lincoln40 and the other proposals provide that at an affordable cost.

96 thoughts on “Commentary: Why Are Bed Rentals So Offensive to Some in this Community?”