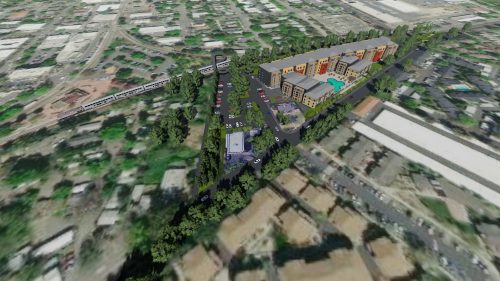 A few of them have settled rather than allow litigation to hold up the projects, but in none of them has a court ruled against the city on the merits – and, in fact, on the water project, the CUP, and Nishi there have been rulings against the litigants.

There were early mistakes by the city, such as settling on the water project which allowed the litigant to claim victory and collect a settlement amount.  That seemed to only encourage more lawsuits, and for the most part, whether it has been Hyatt House, Trackside or Nishi, the city’s procedure is not to settle but to allow the litigation take its course.

However, there is a cost to these suits – beyond the attorney fees and beyond the delay in these projects.

The comments by Robb Davis illustrated this on Tuesday night.  He pointed out that Lincoln40 as a Transit Priority Project was exempt from the need to do an EIR.  The city however, in an abundance of caution, went the extra mile to do an EIR on the project, hoping to avoid litigation.

In our view, litigation on the Lincoln40 project will be difficult if not impossible and we do not expect a lawsuit.  The problem that the litigants would face is twofold.  First, the fact that the project was Transit Priority would normally exempt the project, therefore any EIR is actually by itself above and beyond the legal requirements – and thus it would be difficult to argue that the EIR was insufficient if the EIR was not even required.

The second problem is that a court has already ruled on the issue of the traffic study and impacts at Richards and Olive.  As such, any attempt to litigate might be vulnerable to summary judgments and perhaps the implementation of attorney fees.

But there is a cost to this litigation, as the mayor pointed out on Tuesday.

“I will acknowledge a little bit of frustration as I read (the EIR), realizing that we didn’t have to do it,” he said.  “We chose to make a disclosure when the law of the state of California would not require it.”

we can’t do other things.”

He said, “I think we need to consider the burden that we place on any project and what it means.  It bothered me a little bit over the weekend.

“As a disclosure document it’s something that we can be proud of,” he added.  “But does it really serve our community when we’re not required to – and it adds costs that otherwise could be going into a few extra beds.”

To flesh out the mayor’s comment here, one of the mistakes made early on was that they went to a mitigated negative declaration for the Hotel Conference Center.  It was a bad mistake that invited litigation on CEQA grounds and that is precisely what happened.

The project ended up settling for a nominal amount, but financing issues either independent of or compounded by the litigation forced the Hotel Conference Center to be greatly reduced in scope and thus of benefit to the community.

The lesson learned from that mistake is to go the EIR route, as it makes it far more difficult for opponents to prevail in court.  That is the lesson of Nishi.  The litigants against Nishi continued the suit even after Nishi was defeated at the polls and they ultimately lost the battle in court, which may pave the way for the new project as well as Lincoln40.

But, instead of relying on state law for environmental review in Lincoln40, the applicants at the advice of the city went the EIR route to ensure against a lawsuit. We can estimate that the costs there well exceeded half a million.

That has a cost.  There were two areas where I think the council would have liked more from the applicant.  One was on the overcrossing.  Ultimately, the council pushed the applicant to go from $869,000 in direct contributions up to a million.  But that means the city is going to end up paying just under $2 million for their share of the project – most of that coming from development impact fees and thus not costing general fund money that can and should go elsewhere.

But if the developer didn’t have to pay for the EIR, maybe they could have taken on another half to a full million extra dollars for the overcrossing.

The council ultimately decided to stick with the 12 percent and keep the very low income units, rather than going broader at 15 percent but shallower in terms of benefits.

But without the EIR, maybe they could have gone to 100 affordable beds.  That is 29 students every year that will not have the opportunity for the reduced rate of affordable units, because someone might have sued the city and the city went the EIR route when they didn’t have to.

Certain litigants used to like to brag about how much they saved the ratepayers on water, but how much are they now hurting the students who are struggling to afford the cost of housing while they get their education?

I think Robb Davis is right, transparency is something we seek, but at some point we have to ask, at what cost?

49 thoughts on “Commentary: The Cost of Lawsuits Is More Than You Think”