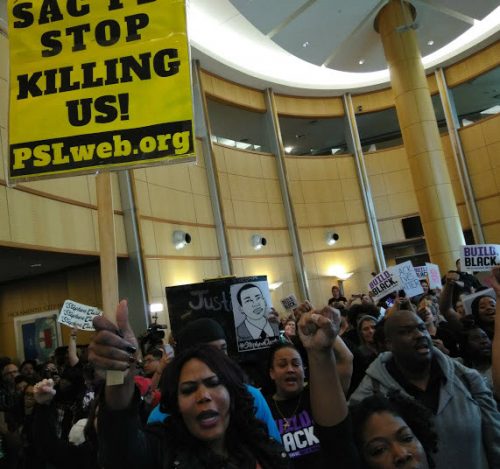 Sacramento has had more than its share of police incidents, from the shooting deaths of Joseph Mann and Dazion Flenaugh to the beating of pedestrian Nandi Cain.  But the Stephon Clark incident seems to have been the flashpoint of a massive pushback.

I have read a lot of the comments from the white community who seem to see Mr. Clark as a “criminal” and his defiance as justification for the shooting.

Along those lines, I think Marcos Bretón’s thoughts in his column from yesterday are worthy of consideration.

He asks, “What will it take for Sacramento to move past painful days of strife over the shooting death of Stephon Clark by Sacramento police?”

The answer for him is “more than African Americans demanding justice for Clark and his family,” and more than “an understanding of a criminal justice system that kills and incarcerates black men at alarming rates. More than the realization that an unarmed man should not have lost his life because cops were looking for a guy breaking windows.”

At the same time, he said “it will take seeing Clark as more than a ‘criminal,’ as he is too often branded by non-African Americans.

“Because as much as we extol Sacramento for being diverse, that point of pride is often exposed as a lie in our public discourse. We have a wonderful city, but we lead separate lives within it, many of us retreating to our privileged silos in moments of public fear and unease,” he writes.

Mr. Bretón argues, “Clark’s death has been that moment for Sacramento.”

He worries that the racial, cultural and economic divide “means that Sacramento could still erupt in violence” and that the veneer of diversity in Sacramento “could be damaged for years to come because enough of us remain polarized over why Clark died and what should be done about it.”

He noted, “We have already seen heightened tensions among bystanders inconvenienced by the Clark protests that have unfolded across the city in recent days. While Clark’s funeral service was streamed live on social media Thursday, the public comments from viewers were often intolerant or abusive of speakers at the service, such as the Rev. Al Sharpton, or Clark’s brother, Stevante,

who drew scorn for his emotional display.”

Mr. Bretón argues, “If we view the anguish expressed at Clark’s memorial with contempt or condescension, then we’re nowhere. If enough of us are tired and bored with it and want to move on, then we’re only marking time until the next Stephon Clark story.”

He notes that, while we can change the law, “changing our biases about Stephon Clark are just as daunting.

“Clark didn’t deserve to die. He shouldn’t have been shot at 20 times because he may have been breaking windows in his neighborhood. If you think Clark had it coming, and have no problem of this incident, then that’s where our shared troubles begin. The impulse to view people who are different from us as ‘the other’ is the wedge undermining Sacramento’s view of itself as a city of diversity,” he writes.

He adds, “If we view Clark’s life and death as an abstraction, a conversation point with a short shelf life before quickly moving on, then we’re lost. Questions of what should or will be done about the police officers who killed Clark are for another day. Police and court reforms are for another day.”

Marcos Bretón argues that we have to get behind the idea that this young man “should not have died.”  Without that at our core, reforms to the police and courts are unlikely.  He argues: “Such reforms happen only when enough people feel they have enough of a stake to demand that their elected officials – Mayor Darrell Steinberg, District Attorney Anne Marie Schubert, Attorney General Xavier Becerra – do what is difficult and needed to prevent the death of the next Stephon Clark.”

I take heart in some of the comments on the Vanguard.

Former Davis Police Chief Phil Coleman, for example, noted, “The precipitating event that led to the police response was a report of vandalism. This is a low-grade misdemeanor.”

He said, “Use of potentially lethal force by law enforcement, in a suspected misdemeanor, is NEVER justified.”

A question yet to be asked, but surely will be: “Why were you running through back yards with your gun out, chasing somebody who MAY have been a misdemeanor offender, at best?”

Another commenter noted, “At the end of the day I hope this shooting makes more departments realize that it just is not worth it to risk anyone getting shot when chasing a guy who was speeding or breaking into cars.  I’m hoping that they will still chase a car bomber or school shooter in to a backyard, but with a guy who just ran a stop sign or stole an iPhone from a car I think we need to slow down and risk the guy getting away and hopefully have less people getting shot…”

Those kinds of comments give me some hope.

Last week, a friend and board member on the Vanguard who happens to be African American was pulled over by a police officer for what turned out to be a legitimate stop, but the fear that he had was overwhelming.

I recall watching a Dateline special where an officer in North Carolina pulled over an African American young man and noticed that the young man was terrified to the point of shaking.  At that point, he realized that something had to change, and was able to engage the young man in conversation and form a bond.

When people ask why people of color are reluctant to comply with lawful, or at times unlawful, commands by police, fear is that the root of it.  Many have seen the death of otherwise compliant African Americans at the hands of police, like Philando Castile, and do not trust that they will get out of the situation alive or perhaps unnecessarily apprehended.

The lack of trust for police authority in communities of color is making it more and not less likely that there will be deadly clashes.  My belief is that at the heart we need to all ask the hard question as to why this young man, Stephon Clark, and many more like him, had to die over such a minor incident.

12 thoughts on “Commentary: Stephon Clark Death Exposes the Hard Truths about Sacramento and Beyond”