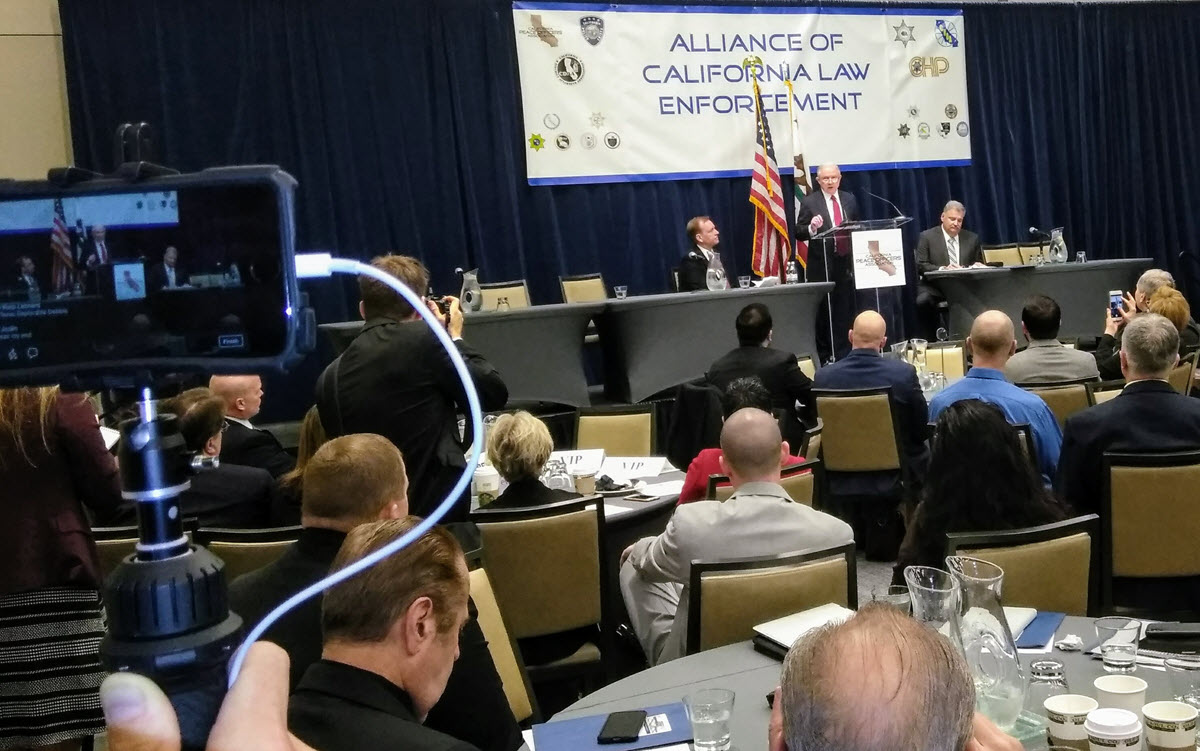 SACRAMENTO – Dozens of television news cameras, from CNN to local and regional broadcast crews, and an equal number of print and other reporters largely didn’t see the people in the streets here very early Wednesday morning as the press hunkered down to hear U.S. Attorney General Jeff Sessions describe California as a state with “open border radicals.”

Sessions spoke to a sympathetic audience of about 150 California state law officials at a downtown Sacramento hotel, aiming much of his wrath at California’s legislature and other executive branch officials, including Gov. Brown, who have passed a series of measures to make California a “sanctuary state.”

Outside, out of earshot of the media, about 250 protestors marched  and chanted. Other than a confrontation with a dozen or so heckling and admitted anti-immigrant folks with a loud bullhorn and cameras, the pro-immigrant crowd was peaceful.

Protestors were surrounded by dozens of Sacramento police officers, and an equal number of “private security” that looked more like tattooed, bearded “Black Water-type mercenaries.

As the rally was breaking up hours later, one immigrant-rights protestor was sent to the hospital after a city of Sacramento police horse, ridden directly into the crowd by the officer, stepped on him.

“There is no nullification.  There is no secession.  Federal law is ‘the supreme law of the land.’  I would invite any doubters to Gettysburg, and to the graves of John C. Calhoun and Abraham Lincoln,” said Sessions, noting state lawmakers’ attempts to make California a sanctuary state independent of federal law is “unlawful.”

And, directly addressing new state and city/county sanctuary laws, Sessions added, “A refusal to apprehend and deport those, especially the criminal element, effectively rejects all immigration law and creates an open borders system.  Open borders is a radical, irrational idea that cannot be accepted.”

Focusing directly on the mayor of Oakland (Libby Schaaf), who admitted alerting the community to pending ICE raids, Sessions was blunt when he declared: “California, we have a problem.” 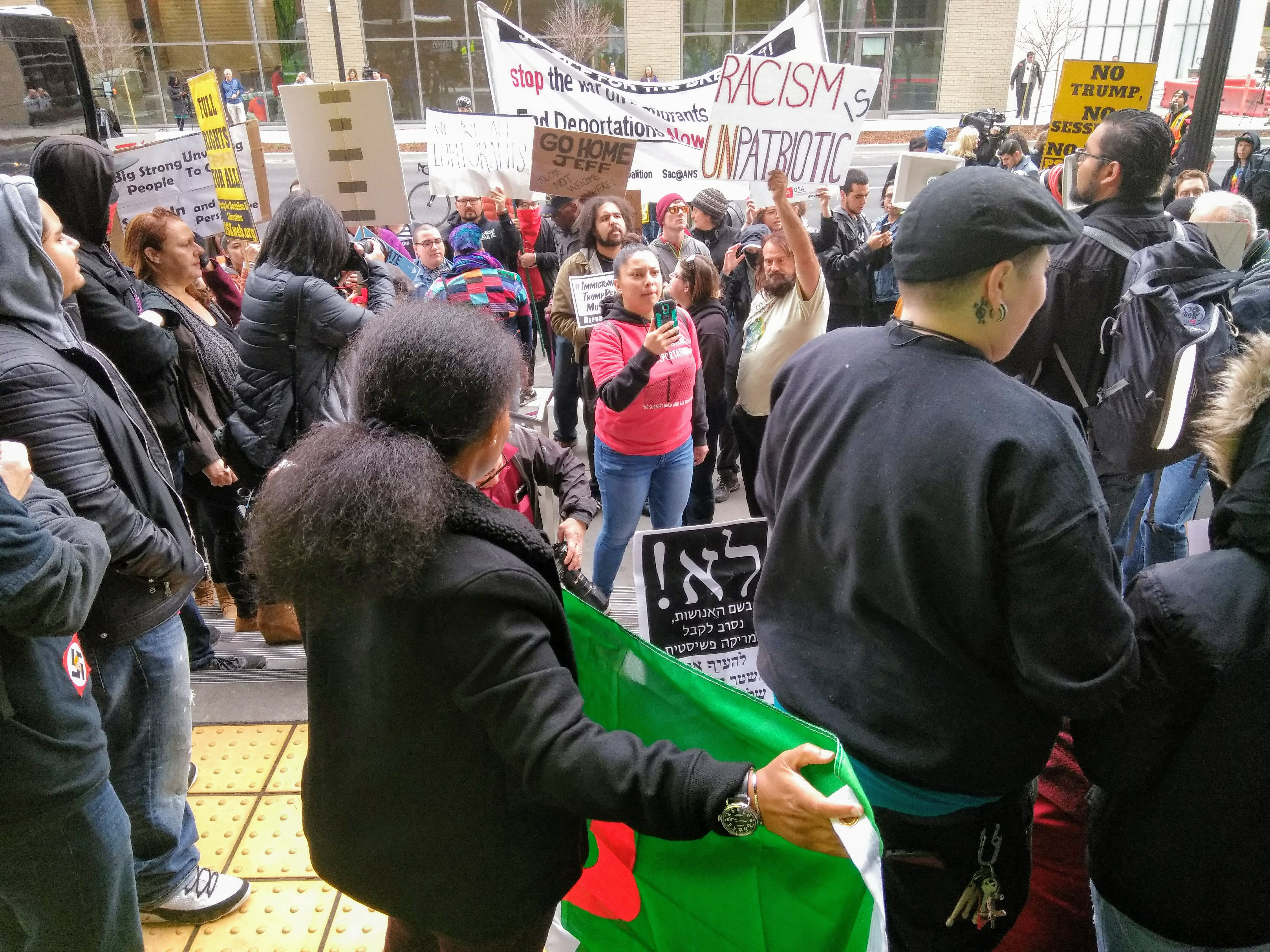 Framing those actions with the Oakland situation, Sessions said 800 illegal immigrants escaped the grasp of ICE  in the Oakland area and “directly and adversely impacted the work of our federal officers.

“The elected Lieutenant Governor of this state praised her (the mayor of Oakland).  Bragging about and encouraging the obstruction of our law enforcement and the law is an embarrassment to this proud and important state,” said Sessions.

“California is using every power it has—and some it doesn’t—to frustrate federal law enforcement. So you can be sure I’m going to use every power I  have to stop them. We are going to fight these irrational, unfair, and unconstitutional (laws). We are fighting to have a lawful system of immigration that serves Americans. And we intend to win,” Sessions declared.

“We are simply asking California and other sanctuary jurisdictions to stop actively obstructing federal law enforcement. Stop treating immigration agents differently from everybody else for the purpose of eviscerating border controls and advancing an open borders philosophy shared by only the most radical extremists,” he said. 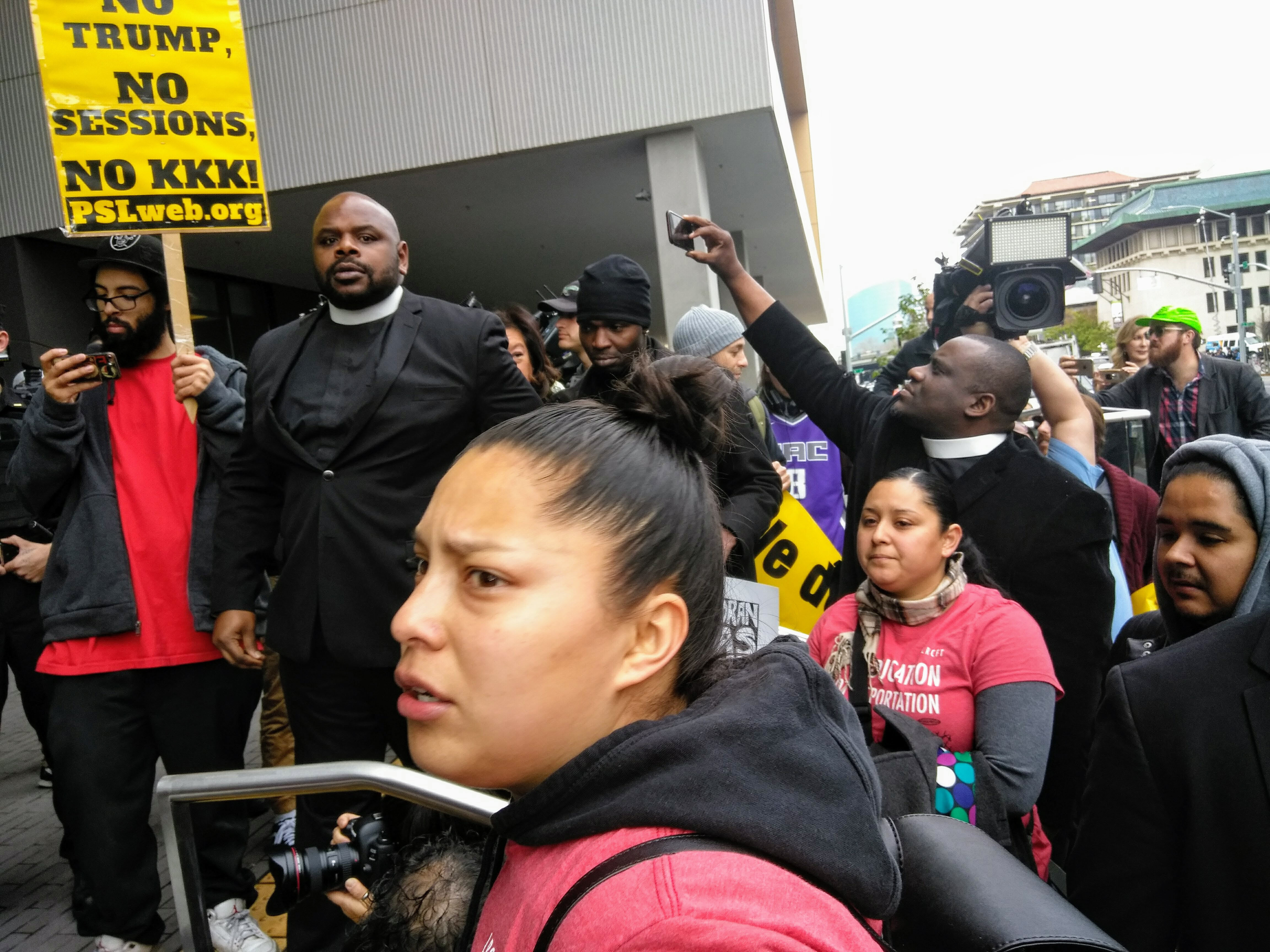 Sessions was referring to sanctuary state laws that prohibit local law enforcement from working directly with ICE agents at the jails, and laws that require businesses to ask for a warrant if ICE agents show up at their doors looking for allegedly illegal immigrants.

Tuesday, the Trump administration sued California over the sanctuary state laws, which Sessions repeatedly characterized Wednesday as being dangerous to law enforcement and the citizens of the state.

But outside, protestors held signs telling Sessions to “go home.”

Phillip Kim, a member of Resistance/Elk Grove, told media outlets that the “immigration issues…is most reminiscent of the Nazis when they were targeting people, deporting them and separating families.”

“This (the lawsuit) is a warning shot across our state’s sovereignty….we want to stop breaking families up. That’s why we’re out here,” said Juliette Beck, one of the activists outside the hotel where Sessions was speaking.

Gov. Brown, at a news conference following Session’s 25 minute speech, said the federal government is “going to war against the State of California,” describing the Trump administration as “full of liars.” 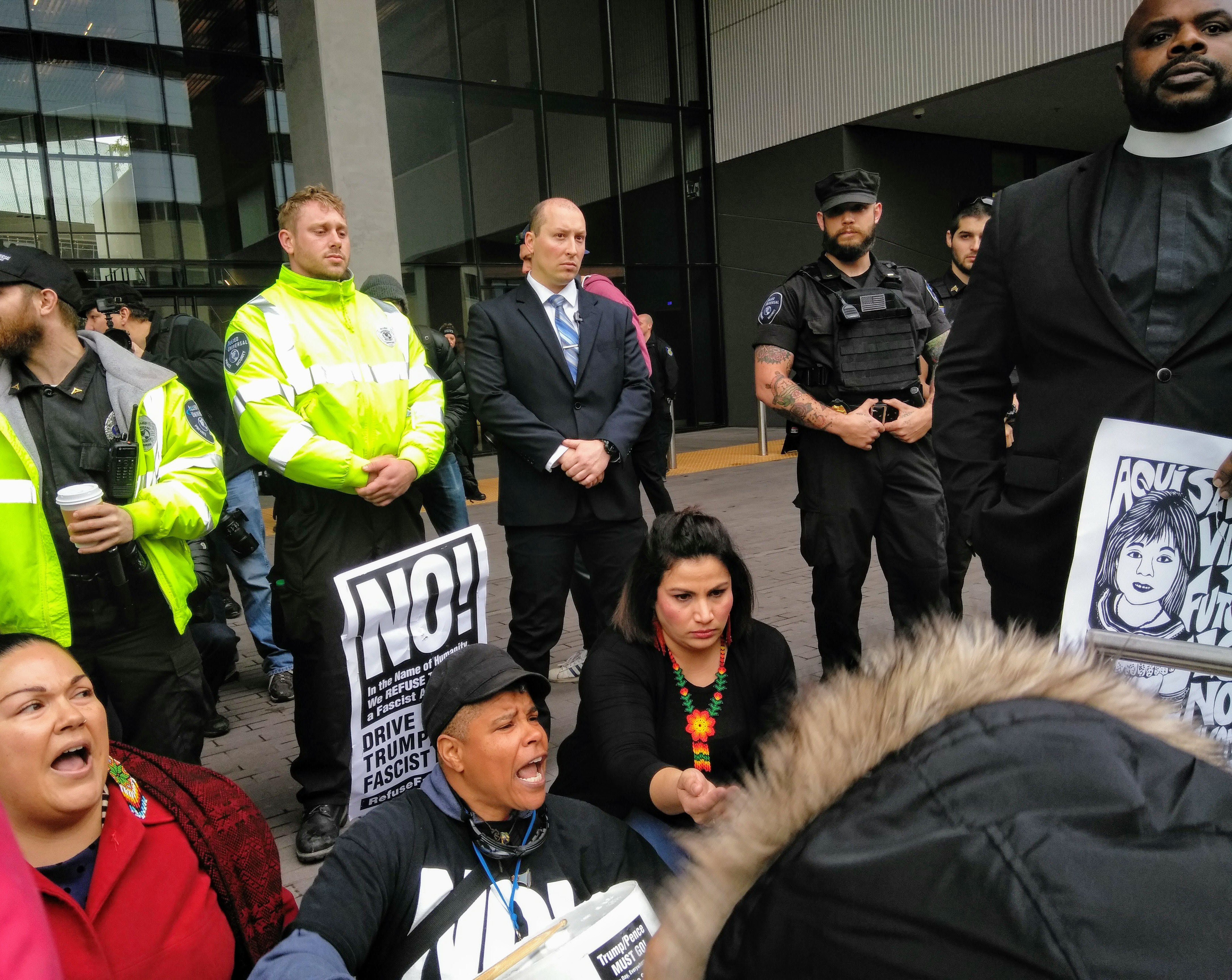