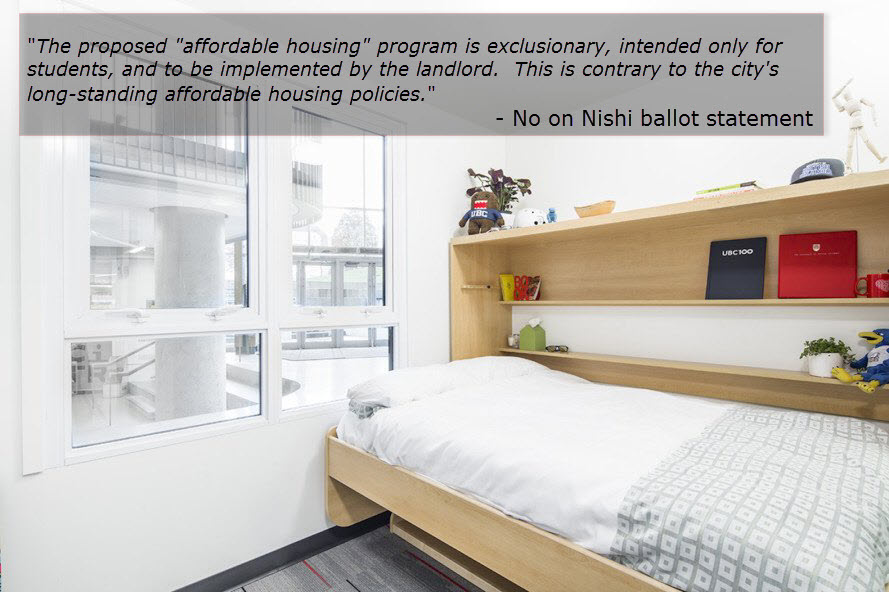 On Saturday, we pointed out that Nishi opponents, in addition to taking on expected issues like air quality, have also somewhat surprisingly gone after the Nishi affordable housing program.

They argue: “The proposed ‘affordable housing’ program is exclusionary, intended only for students, and to be implemented by the landlord. This is contrary to the city’s long-standing affordable housing policies.”

The problem, as we pointed out on Saturday, is that traditional affordable housing programs do not serve students at all.  Students generally do not qualify for those programs.  As staff notes: “Student households are generally not eligible to occupy affordable housing financed with state or federal subsidies.”

The article drew a notable comment on Facebook.  It stated that “most resident(s) (of) Davis are NOT against affordable housing for students… we are just against ‘projects’ that affect the town we

The standard affordable housing, as the city points out, does not provide students with eligibility, which means they are effectively excluded from low income and subsidized housing.

The Nishi proposal has created a model where they use private funding, internally generated, to subsidize lower income students.  So now, instead of paying $950 for their own room and $800 for a shared room, they pay between $400 and $570 for an affordable room.

So I agree that the residents of Davis do not specifically oppose affordable housing, but, de facto, that is what they are doing here by posing this argument.

It is worth noting that UC Davis does not do a good job of supplying affordable housing to its students either.  We have long noted that on-campus housing costs are a good deal higher on-campus than off-campus – by about 60 percent.  The Vanguard has pounded the university on this issue since the beginning of January, and UC Davis in their last announcement finally agreed “to set rents at levels significantly below market rates in the city of Davis.”

That is a big change and a welcome one.

However, as graduate student Ellie White points out, graduate students are paid less than a living wage in Yolo County and the provision of affordable housing on campus is lacking.

She argued: “This severely limits the options of affordable housing available to students… to the extent that some people are left without homes, with reports of students being homeless or living out of their cars.”

Meanwhile, Caroline McKusick points out that UC Davis has failed to provide affordable housing to students on campus.

Ms. McKusick pointed out that after UC Davis closed Orchard Park, they then announced they would close Solano Park. “Student Housing began dramatically raising rents and parking permit costs. What had once been affordable housing now came to cost almost 50% of a student-worker’s income.”

The university has yet to reach agreement with the graduate students that would alleviate this problem.  So the go-to solution for residents that “UCD has much land that could be built on for the students that are much safer, environmental, for students…” falls on deaf ears.

Nishi can provide what UC Davis has not been able to do so – actual affordable housing near campus for students that would not be provided on campus or anywhere else.

For students who are struggling to pay rent, students whose parents do not have the resources to help, Nishi could be a life saver.  That is a real benefit to one of the most vulnerable populations we have – low income students.

Do opponents of Nishi really want to fight that battle?

The implications of that argument are that we should not provide affordable housing to students in this community.  That is what they are in effect arguing.

At the February council meeting, Councilmember Lucas Frerichs said, “This is an innovative path forward.”  He added that it is “trying to get the access and true affordability for students which has not been done before.”

I absolutely agree that UC Davis should do more both in terms of providing housing on campus and in terms of affordability.  UC Davis has finally stepped up to provide up to about 46 percent of all students with housing on campus.  Those who want them to get to the full 50 percent may have to wait, but moving from 29 percent to 46 percent is a good start.

But housing itself is not enough.  They are finally promising to provide housing at rents below market rates.  That’s good, because right now we have people sharing bedrooms with two other people and paying $950 a month just in rent.

We will see what that statement actually means down the line, but, in the meantime, it doesn’t make sense not to embrace the promise of affordable housing at Nishi.  Students who can pay between $400 and $600 per bed each month, rent that pays for everything but food, provides the students with a true promise of affordability.