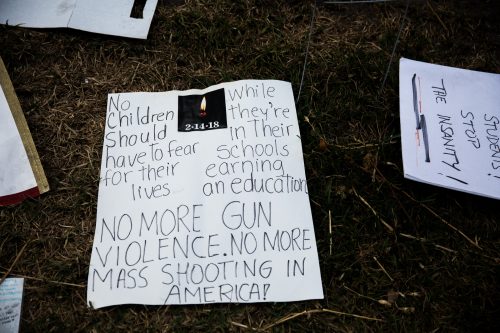 This past weekend, hundreds of thousands of protestors from around the country took to the streets to demand action against gun violence. The movement has been energized by young people who turned out en masse in response to the horrific shooting in Parkland, Florida, in which 17 people — most of them teenagers — lost their lives. We applaud the many students who have exercised their speech rights to seek change. This moment calls on us to act not only to ensure that massacres like Parkland do not recur but to end the everyday gun violence that takes exponentially more lives from our communities. It also demands that we do so in a manner consistent with our most cherished civil liberties and constitutional rights.

Lawmakers across the country are currently considering a range of gun control measures. The American Civil Liberties Union firmly believes that legislatures can, consistent with the Constitution, impose reasonable limits on firearms sale, ownership, and use, without raising civil liberties concerns. We recognize, as the Supreme Court has stated, that the Constitution does not confer a “right to keep and carry any weapon whatsoever in any manner whatsoever and for whatever purpose.” But some proposed reforms encroach unnecessarily on civil liberties.

When analyzing gun control measures from a civil liberties perspective, we place them into one of three categories. First are laws that regulate or restrict particular types of guns or ammunition, regardless of the purchaser. These sorts of regulations generally raise few, if any, civil liberties issues. Second are proposals that regulate how people acquire guns, again regardless of the identity of the purchaser. These sorts of regulations may raise due process and privacy concerns, but can, if carefully crafted, respect civil liberties. Third are measures that restrict categories of purchasers — such as immigrants or people with mental disabilities — from owning or buying a gun. These sorts of provisions too often are not evidence-based, reinforce negative stereotypes, and raise significant equal protection, due process, and privacy issues.

Many of the options now being considered raise no civil liberties concerns. That includes bans on assault weapons, high-capacity magazines, and bump stocks. Raising the minimum age for all gun

ownership to 21, currently the legal age for purchasing a handgun, also raises no civil liberties issues, as research on brain development shows that young people’s impulse control differs from that of adults.

So-called “red flag laws,” which provide for protective orders to remove guns from people who pose a significant risk to themselves or others, can also be a reasonable way to further public safety. To be constitutional, however, they must at a minimum have clear, nondiscriminatory criteria for defining persons as dangerous and a fair process for those affected to object and be heard by a court.

Other gun control measures may also be justified, such as laws that keep guns out of sensitive places like schools and government buildings; requirements that guns include smart technologies (like password protection) that ensure that only the lawful owner of the gun may use it; and requirements that gun owners first obtain a permit, much like a driver’s license, establishing that they know how to use guns safely and responsibly. There would also be no constitutional bar to lifting the existing limits on Center for Disease Control-funded research into guns and gun violence.

Extending background checks, which cover federally licensed gun stores, to gun shows and other unlicensed transactions, is also a reasonable reform. There is no civil liberties justification for the “gun show loophole.” We do not object to universal background checks if the databases on which they rely are accurate, secure, and respect privacy.

But the categories of people that federal law currently prohibits from possessing or purchasing a gun are overbroad, not reasonably related to the state’s interest in public safety, and raise significant equal protection and due process concerns. Any number of the categories, for example, require no proof of dangerousness, and they often serve to further bias. For example, the list of those barred includes: anyone convicted of a crime punishable by imprisonment for more than a year, whether or not the crime has any connection to violence; people with mental disabilities and many noncitizens who have not been shown to be dangerous in any way; and those who have used substances on the federal controlled substance list, including marijuana in states in which it is legal.

Other proposed gun regulations also raise civil liberties concerns. The proposal to ban individuals listed on the No-Fly List from purchasing weapons, for example, is constitutionally problematic, because that list lacks basic due process protections and its standards are unconstitutionally vague.

Proposals to arm teachers and install metal detectors in schools also raise significant civil liberties implications. Introducing more guns to schools will not make them safer and may especially endanger children of color, who already bear the brunt of teachers and administrators’ racial biases. The solution to gun violence is not more guns, but less.

The Supreme Court has said that the Constitution permits reasonable regulations of firearms in the interest of public safety. We agree. But those regulations can and should be crafted to respect fundamental rights to equal protection, due process, privacy, and freedom from unlawful searches. Lawmakers should have the moral courage to act and to do so consistent with our most cherished liberties.

Share:
Tags:ACLUGun ControlGun ViolenceParkland
Previous : Commentary: Haunted by the Ghosts of Parkland
Next : A Dispensary Pushes Back against City Staff Ranking