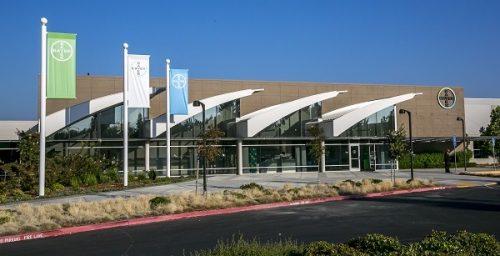 AgraQuest was a homegrown success for Davis.  It began as a small company that specialized in environmentally friendly agricultural research.  By 2012, the company had grown to more than 200 employees and its success prompted Bayer CropScience, a global agricultural technology company, to acquire it for $425 million.

But for Davis, instead of reaping the continued benefits of the large and growing operation, it became the source of a huge loss.  In the summer of 2013, Bayer CropScience announced it would be expanding its facility, which required it to move from Davis, where the company AgraQuest was founded, to West Sacramento which had space available to accommodate the company.

Davis’ loss was West Sacramento’s gain.  And the loss of that company and the potential loss of other expanding companies for a time became the impetus for Davis’ push for innovation centers.  A push that culminated in the 2014 applications of the Davis Innovation Center and the Mace Ranch Innovation Center.

Unfortunately, we know how that story ended.  The Davis Innovation Center, unwilling perhaps to roll the dice in an uncertain Davis development environment, pulled its application and eventually landed north in Woodland.  The Mace Ranch Innovation Center has kept its application going, but aside from last year’s push to certify its EIR, it has not been heard from in recent months either.

Meanwhile, the loss of Bayer is the loss that keeps on giving for the city of Davis.

A 2014 column by then-Davis Chief Innovation Officer Rob White lamented the move of Bayer CropScience LP (formerly AgraQuest) to West Sacramento.  “Yesterday we began to learn the magnitude of the

He remarked, “A major global corporation is putting its ‘world headquarters’ for an entire arm of its forward looking research and development in West Sacramento instead of Davis.”

Mr. White added that “if the news couldn’t get worse for Davis, the article describes that Bayer also announced that about 30,000 square feet of the building will be developed in the coming months into a lab for vegetable seed research and development, which will then move from Davis to West Sacramento. So, more jobs lost and the growth potential of that company shifted away from Davis.”

And the kicker: “Bayer CropScience announced it has donated $10,000 to the Powerhouse Science Center, a science education museum being developed in Sacramento.”

That was in September 2014.  Now, three and a half years later, the news keeps getting worse.

On Friday, UC Davis announced a strategic strategic collaboration agreement with, you guessed it, Bayer CropScience.  And how ironic, they will “foster innovation and economic development in the Sacramento region by providing dedicated facility support for university-affiliated startups — particularly those in the areas of agriculture and food-related technologies.”

In other words, the company that Davis lost is now going to collaborate with the university in our backyard, to create the type of research and innovation and economic facility that we have desperately sought.

The release from the university, “Located within Bayer’s West Sacramento Innovation Hub for Crop Science, the 3,000 square-foot CoLaborator is designed to house and foster innovative new ventures to transform modern agriculture. It consists of a flexible floor plan that has the capacity for eight to 10 researchers and provides basic equipment for ag-tech startups to quickly begin putting their ideas to the test.”

“Working with Bayer provides our campus entrepreneurs with another tremendous resource and further strengthens the growing regional innovation ecosystem,” said Dushyant Pathak, associate vice chancellor of Research and executive director of Venture Catalyst at UC Davis. “The value of this effort extends much further than addressing the need for appropriate facilities, it creates an opportunity for entrepreneurs to engage with other experts in and outside their field and build relationships critical for their success.”

As part of the agreement, “Bayer joins the university’s Distributed Research Incubation and Venture Engine  (DRIVETM) network of startup incubators. The DRIVE network is part of a platform of resources offered by UC Davis Venture Catalyst  to support the successful translation of research and new technologies emerging from the university into new commercial ventures. Venture Catalyst is part of the Technology Management and Corporate Relations division of the UC Davis Office of Research.”

“We are thrilled to be working with the University of California, Davis, to help grow new ventures with the possibility to transform modern agriculture,” said Jon Margolis, head of Research and Technologies Biologics at Bayer. “While we at Bayer are proud of the advances in our own laboratories, we recognize that the challenges today’s growers face will require an open innovation strategy that taps into the larger scientific community.”

A few years ago Davis was on the edge of producing innovation centers that could focus on, among other things, agricultural technology.  Davis had developers and investors lined up and the land identified to make it happen.  But the developers found that they could not make it past the difficult Davis land use process.

So now, one of the potential investors is proceeding with their innovation center in Woodland, while one of the companies we lost because we lacked research space is now in West Sacramento and partnering with UC Davis to create the type of facility we have long desired.

Meanwhile, Davis is struggling to pass a tax this spring so that we can retain our parks and our roads while we try to figure out a way to generate revenue.  Something that our neighbors to the north and east are now benefiting from – our reluctance to take advantage of the presence of a world class university.

As UC Davis has shown, with first Sacramento and now West Sacramento, they are not willing to wait for Davis to act.  We still have opportunities to take advantage of the high tech, economic development wave, but if we don’t, the region will pass us up and all that potential will go down the drain.

41 thoughts on “Sunday Commentary: Bayer, the Loss That Keeps on Giving”